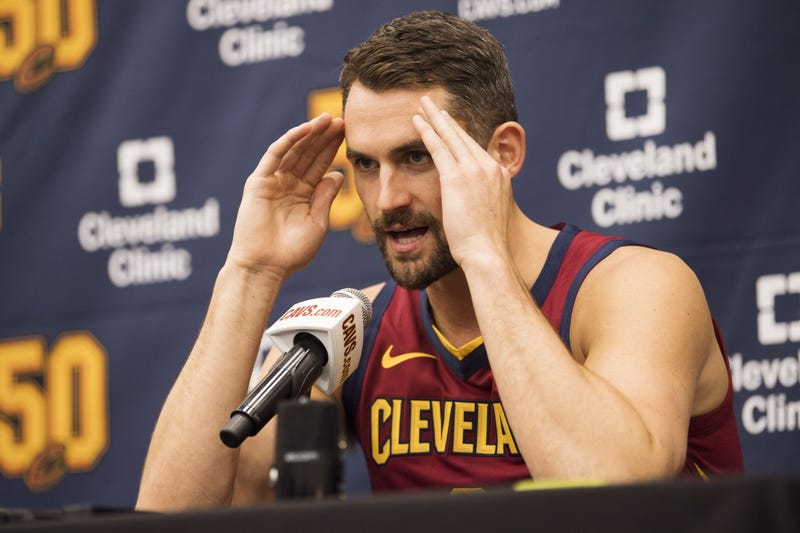 The Cavaliers and Kevin Love are currently going through a messy split that includes passive aggressive acts, reports about Love’s unhappiness and an inevitable end to what has been a successful run together.

The latest sign that the two sides are destined to part ways happened after Saturday’s shootaround. A verbal altercation between Love and Cavs general manager Koby Altman reportedly took place in front of other players, coaches and front office staff.
The altercation happened after the organization fined Love $1,000 for slapping chairs on the bench and showing his frustrations during a blowout loss to the Raptors on Dec 31.

This is what happens when two sides need to part ways. Love is doing everything he can to show Altman and the rest of the organization that he wants out. Saturday wasn’t the first time Love had argued with Altman about his future and the Cavaliers’ direction.

The 5-time All-Star wants to be traded. He’s doing everything he can to show his displeasure, without publicly admitting that he wants to be dealt.

Meanwhile, Altman is hoping to acquire young players and future assets in exchange for Love. That’s much easier said than done. Love is in year one of a 4-year, $120 million contract extension. He’s under contract through the 2022-2023 season.

The clock is ticking. The trade deadline is Thursday, Feb. 6 at 3 p.m. Altman and the Cavaliers have no choice. They have to move Love, even if it’s going to be painful.

Altman probably won’t get the return he hoped for, but he has to get the disgruntled veteran away from Collin Sexton, Darius Garland, Kevin Porter Jr. and the rest of the young roster.

Love was in Cleveland for the glory days. His tremendous defense on Stephen Curry helped secure an NBA Championship in 2016. His efforts helped the Cavs make four straight NBA Finals appearances.

He is a big part of Cavs’ history, but all good things come to an end. Unfortunately, like most relationships, Love soured on the idea of being in Cleveland quickly.

"I'd like to thank the Cleveland Cavaliers organization, Dan Gilbert and Koby Altman for having their trust in me and believing in our future," Love said during a signing ceremony on July 24, 2018. "When I got traded here a few years back, I was committed to being here long term and I was committed to our culture, excellence in playing the game of basketball. And I think who we have on our team and who we have moving forward really reflects that."

Less than 18 months later, Love wants out and the Cavaliers are more willing than ever to trade the former All-Star.

Love posted a photo from the movie “The Joker” on Instagram following his reported altercation with Altman on Saturday.

Mood.
A post shared by Kevin Love (@kevinlove) on Jan 4, 2020 at 9:02am PST
His frustrations spilled onto the court on Saturday night against the Thunder. Love's body language was downright bad at times, including the Cavs' final possession before halftime when he ran to the top of the key and demanded the ball from Sexton. He quickly fired the ball to Cedi Osman.

It's going to get worse before it gets better. Love wants out. The Cavs don't have time to deal with his antics and they certainly aren't going to send him home like they did with J.R. Smith last season. Smith was in the final year of his deal. Love is under contract for three more seasons after this one.

It's time for the Cavs and Love to part ways. Altman has to swallow his pride and trade the former star before the deadline. Keeping Love around for the rest of the season would do more harm than good.

Breakups are never easy — especially with as much history as the Cavs and Love have together, but this is inevitable. Trading Love would be best for all involved, including him, the organization and the fans.