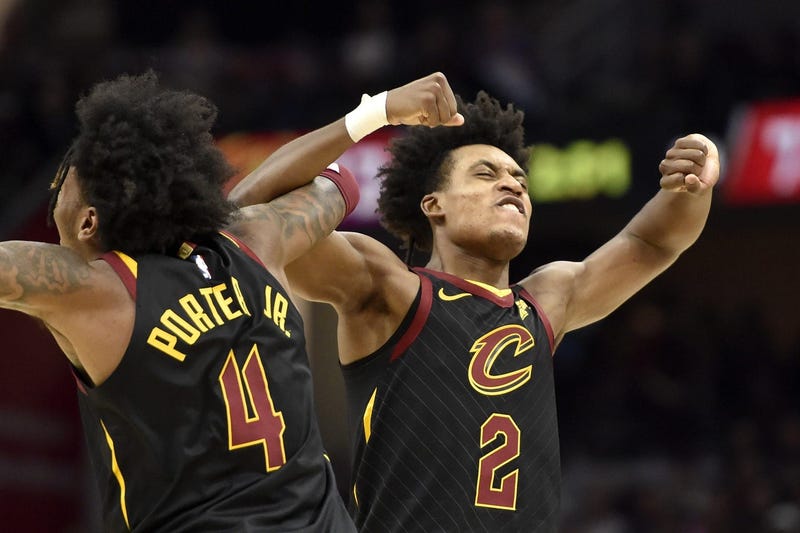 The Cavaliers were aggressive from the start. Darius Garland and Collin Sexton were all over Hawks All-Star Trae Young. They held him to just three points in the first quarter, as the Cavs built a 33-19 lead.

“We made some strides,” head coach John Beilein said. “You saw it today, our guys didn’t quit, they played hard and played together, even without Kevin. It was a great win. Every win is a great win at this stage. Every win.”

The Cavaliers haven’t done much winning at home this season. They're 7-22 at Rocket Mortgage Fieldhouse. It was their first home win since Dec. 23.

The Cavaliers were more physical than the Hawks. Tristan Thompson, Andre Drummond and Larry Nance Jr. dominated Atlanta, as the trio all tallied double-doubles. Thompson had 27 points and 11 rebounds, Drummond had 14 points and 15 rebounds and Nance had 23 points and 12 rebounds. The Hawks entire team finished with 38 rebounds, which was just enough to match the Cavs’ trio.

“All three of their bigs had the same amount of rebounds that we had,” Hawks head coach Lloyd Pierce said. “They were aggressive in the paint, on penetration and they were aggressive around the basket. It’s just the attack mentality that they had.”

Thompson was the Cavs’ MVP on Wednesday night. He made three 3-pointers, two of which came in a 14-point second quarter outburst for the veteran center.

“When we went to Tristan, he gave us such a good lift,” Beilein said. “Such meaningful minutes when he comes off the bench. He was a former starter that comes in and gave us some girth as well. We never expected the three 3s, but a stretch 5 is good to have. We’ll wait on that one, but I’m sure we’re going to have to let him shoot it again after that performance.”

Thompson coming off the bench is a luxury, but his performance shows how valuable he can be to a winning team. He isn’t expected to take a buyout from the Cavaliers, but could change his mind between now and the March 1 deadline.

Both Sexton and Garland continue to show their growth on both ends of the court. Sexton finished with 23 points, but continues to develop as a passer. He found multiple teammates for open 3-pointers throughout the game, finishing with six assists.

Garland, who has struggled with his shot in recent weeks, finished 5-for-12 from the floor with 12 points and seven assists. He attacked the rim and made multiple floaters over bigger defenders, which is a shot he’s worked hard to improve throughout this season.

“He’s (Garland) grown a lot,” Thompson said. “The biggest thing for him is to keep working on his body. I see him like a young Damian Lillard type. I think he has potential to be a guy like that in our league — young Dame. So watch film on Dame. You see how Dame is built, his traps, he’s a strong guard that can get in the lane.”

This is the #Cavs play of the year. Whew---- pic.twitter.com/ukqSq2nQD2

Kevin Porter Jr. continues to have flashes of brillance off the bench for the Cavaliers. He finished with 18 points, four rebounds and three assists. Porter didn't have any turnovers and continues to make plays on defense.

Sexton, Garland and Porter played 32 minutes each. The trio is inconsistent, but their flashes are enough to give fans hope for the future.

Porter may have the highest ceiling of them all. He has the size, athleticism, talent and instincts to be a great player in the NBA one day. It wouldn't be surprising to see Porter inserted into the starting lineup after the All-Star break.

The Cavaliers don’t play again until Feb. 22 at Washington due to All-Star weekend in Chicago. Sexton will represent the Cavs in the Rising Stars game on Saturday.