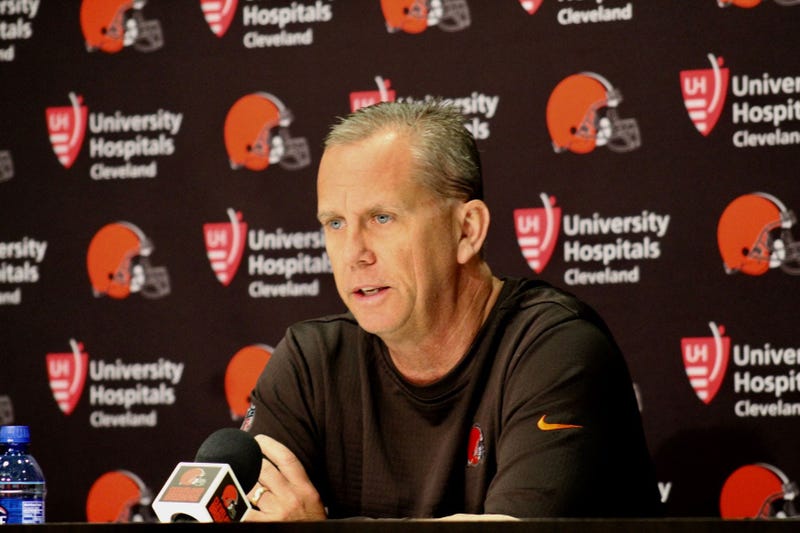 November 7, 2019 11/07/2019 5:15 pm
Berea, Ohio (92.3 The Fan) – While the drumbeats grow louder and louder for offensive coordinator Todd Monken to take over play calling duties from head coach Freddie Kitchens, the cries are falling on deaf ears.

It’s not going to happen because it was never in the plan to happen.

“I came here knowing that I wasn’t going to be calling the plays, so it’s really a non-issue,” Monken said. “Like I always say, when you’re an assistant coach, and you take on a job, that was discussed before I came. So the bottom line is, I came knowing those parameters, so in the end like any assistant, you do exactly what the head coach asks you to do and this is what he asks me to do on a daily, weekly basis, that’s what I do.”

According to Monken nothing has changed and nothing will.

Monken acknowledged he understands the bewilderment and frustration that is out there surrounding Odell Beckham Jr. and why the talented receiver isn’t getting targets in the red zone this season.

“Some of it is what they’re doing,” Monken said, referring to opposing defenses. “Some of it is obviously what we’re doing and I’m talking about collectively, schematically. It’s not like we’re purposely looking one way or looking away from somebody.

“Obviously, when you have that few of targets to somebody like that, then you’ve got to take a look at it and say, ‘How do we get our playmakers the ball?’ That’s every part of the field. That’s really not just (in the red zone), but obviously with our struggles there, we’ve looked at that, and we’ll continue to look at it as we move forward.”

Beckham leads the Browns in catches with 39 and receiving yardage with 575 but he has just 1 touchdown this season, which came Wee 2 in a 23-3 win over the Jets in the fourth quarter that saw him turn a basic seam route into a 89-yard score.

“When you have a great player like him, we're always looking for ways to involve him in the offense,” Monken said. “There's only one ball. That's the way it is. Bottom line is the frustration comes from losing and not scoring points in the red zone.”

The other mystery that has fans scratching their heads this season is Rashard Higgins and the lack of targets since he’s returned from a knee injury that sidelined him for 4 games.

Higgins has been targeted just 3 times in the last 2 games and played a total of 29 snaps. He has caught 1 pass for 2 yards.

“Well, first off it’s tough for Rashard just the way the year started and in terms of I thought he had a really good preseason camp and then had a real good start to the year and then got hurt,” Monken said. “Obviously last year they didn’t have Odell, so that’s part of it, as well. You had some other guys that were more role players, so all of a sudden, a player’s role changes, and he’s trying to find a niche, and we are, too.

“So it’s a little more complicated than that, but obviously he’s a guy that Baker (Mayfield) has real comfort in and we do have to get him more involved. We do. You’re right and have him be a bigger factor in what we do. Again, there’s only one ball, but it has been frustrating I’m sure for him and for us.”

Shoes to fill – The release of safety Jermaine Whitehead on Monday created a hole in the secondary for defensive coordinator Steve Wilks to fill.

Wilks, who plans to employ Morgan Burnett the most to fill Whitehead’s role, fully supports the Browns’ decision to waive Whitehead after he responded to criticism on Twitter from multiple fans and 92.3 The Fan’s Dustin Fox with threatening and racist posts.

“I do not condone what he said or did. It is very unacceptable, inexcusable and it was very insensitive,” Wilks said. “That is the world and life that we live. Our lives, our job is scrutinized, and you know what? We have to play better, and we have to tackle better. We need to put a better product out there for our fans.”

Salute to Service – The Browns will honor servicemen and servicewomen from each military branch during Sunday’s game against the Bills as part of the league’s ‘Salute to Service’ initiative.

General manager John Dorsey was nominated as the team’s ‘Salute to Service Award’ nominee, which annually recognizes NFL players, coaches, personnel and alumni who demonstrate an exemplary commitment to honoring and supporting the military community.