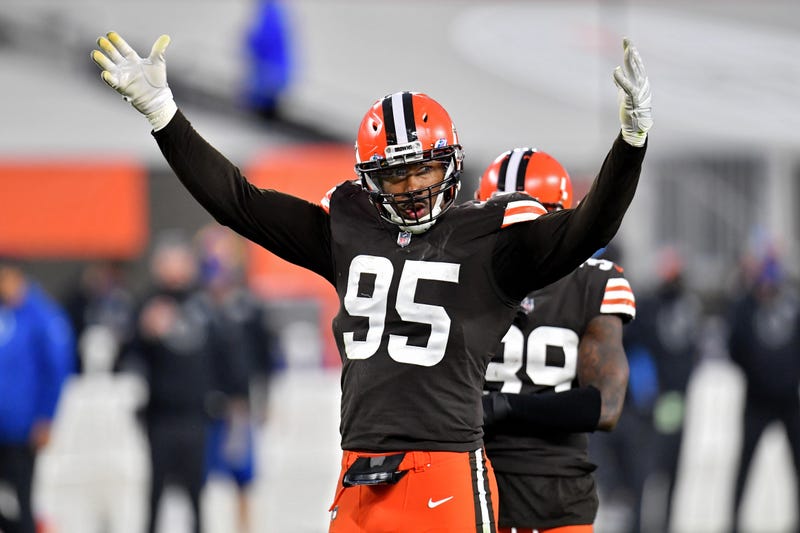 Myles Garrett #95 of the Cleveland Browns pumps up the crowd in the fourth quarter against the Indianapolis Colts at FirstEnergy Stadium on October 11, 2020 in Cleveland, Ohio. Photo credit Jason Miller-Getty Images
By Daryl Ruiter

The Pittsburgh Steelers have been monsters since 1999.

As the Browns look to win their fifth straight, which would set an expansion record for the longest win streak since the team’s return, they look to exercise the demons that have seen them lose their last 16 trips to the Steel City.

The Browns have scored at least 30 points in four straight games, their longest streak since 1968, when they did it seven times in a row.

The Steelers seek their second 5-0 start in franchise history. The club previously did it in 1978, when Pittsburgh finished 14-2 and won its third Super Bowl in five years.

This marks the first meeting between the two teams since 1994 in which both clubs have been at least three games over .500.

What to watch for – All eyes will be on Browns star defensive end Myles Garrett as he faces the Steelers for the first time since he was suspended six games by the NFL for hitting Pittsburgh backup quarterback Mason Rudolph in the head with a helmet last November in Cleveland. Garrett’s six sacks lead the AFC and he’s made game-swinging plays — three strip-sacks and forced a safety — in the past four games. Pittsburgh is dealing with a banged-up offensive line. Pro Bowl center Maurkice Pouncey (foot) and right guard David DeCastro (abdomen) went down with injuries last week against Philadelphia. Pouncy is expected to play after missing practice Wednesday while DeCastro was ruled out.

Baker Mayfield threw for a season-high 247 yards with a pair of touchdowns and interceptions in last week’s win but he was limited at practice for most of the week with a chest or rib injury inflicted by Colts defensive end Justin Houston. The Steelers are expected to bring the heat led by TJ Watt, who has three straight games with a sack and at least 2 tackles for loss. The Steelers lead the NFL averaging 5.0 sacks per game while Cleveland’s offensive line has surrendered just seven sacks through five weeks. Pittsburgh has at least one sack in 61 straight games, the longest active streak in the NFL and fourth longest in league history.

Two of the top five run defenses square off. The Browns are ranked fourth against the run allowing 87.0 yards per game while the Steelers are second giving up 64.0 on the ground and allowing just 3.3 yards per carry. Kareem Hunt churned out 72 yards on 20 carries against the then ranked No. run D of the Colts and Cleveland, who leads the NFL in rushing and averages 5.48 yards per carry, finished the afternoon with a combined 124 yards on the ground. The Steelers will throw James Conner and Benny Snell at the Browns. Conner seeks a rush TD in his fourth straight game while Snell had gotten into the end zone in his last two AFC North games.

Receiver Chase Claypool bust on the scene last week with a seven catch, 110 yards and three TD performance. He ran for a fourth score as well. Claypool is third in the NFL in yards per reception (20.1) and his five total touchdowns lead all rookies.

Cleveland will start Sheldrick Redwine and Andrew Sendejo at safety with Karl Joseph and Ronnie Harrison unavailable due to injury. The team elevated safety Elijah Benton from the practice squad for added depth traveling to Pittsburgh.

Ben Roethlisberger’s return from right-elbow surgery has been spectacular. The 17-year veteran has 10 touchdowns against a single interception and is getting steady protection in front of him, taking just six sacks in five games. The Ohio native is 23-2-1 against Cleveland and has thrown 40 TDs against the Browns.