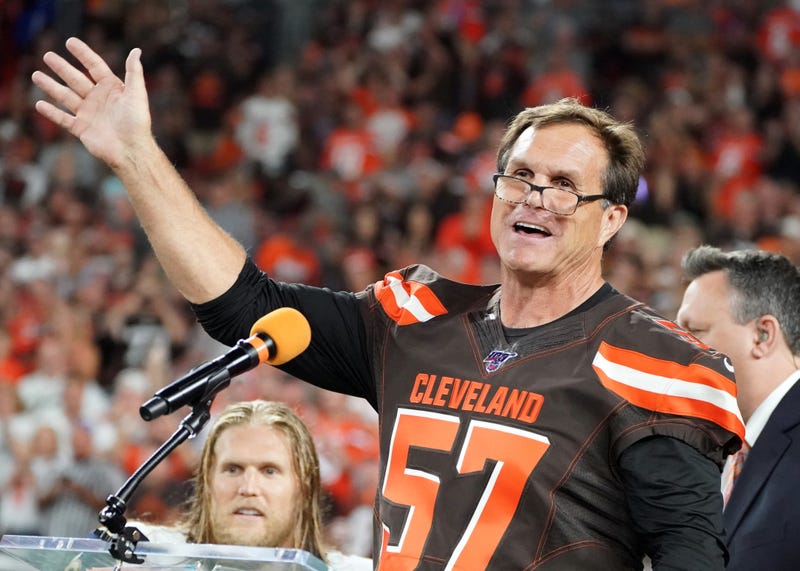 Former Cleveland Browns linebacker Clay Matthews Jr. (57) as he is inducted into the Browns 'Ring of Honor' during a halftime ceremony against the Los Angeles Rams at FirstEnergy Stadium. Photo credit Kirby Lee-USA TODAY Sports
By Daryl Ruiter

CLEVELAND, Ohio (92.3 The Fan) – The Pro Football Hall of Fame announced its 130 modern-era nominees for the class of 2021 Wednesday and the Browns were well represented.

The former Browns linebacker, selected 12th overall in the 1978 NFL Draft by the franchise, has been a semifinalist multiple times, including last year but is still awaiting, and hoping for, a call from Canton. Matthews was a three-time All Pro and four-time Pro Bowler. His 278 games played over 19 seasons rank 17th in NFL history and he racked up 1,595 tackles, 69.5 sacks, 27 forced fumbles and 16 interceptions.

Matthews was inducted into the Browns ‘Ring of Honor’ last year becoming the first non-Hall of Famer to receive the honor.

Dynamic returners Eric Metcalf and Josh Cribbs are once again made the list along with former running back Ernest Byner.

Cribbs, originally signed as an undrafted free agent out of Kent State, defied the odds and made 3 Pro Bowls as a Brown. He finished his career tied for third in NFL history with 13,488 career return yards, third in kickoff return yards (11,113) and fifth in career return touchdowns (11).

Byner, who played 7 of his 14 seasons in Cleveland, had 2,713 rushing yards and 2,034 receiving yards for the Browns from 1984-88 and was a vital piece of the Browns’ late 80’s resurgence that saw the team make the AFC championship game in back-to-back seasons. In 1985, Byner and Kevin Mack became just the third running back duo in league history to amass 1,000 yards apiece in the same season. Byner returned for the 1994 and 1995 seasons. He tallied 8,261 rushing yards, 4,605 receiving yards and 71 touchdowns throughout his career.

Brown was a member of the 1999 expansion Browns and the 7-time Pro bowler started 10 games that year.

McGinest played the final 3 seasons of his distinguished 15-year career for the Browns, starting 38 games.

Garcia started 10 games for the Browns in 2004 and Delhomme appeared in 5 games during the 2010 season.

Spielman joined the Browns in 1999 but a neck injury forced him to retire before the start of the regular season.