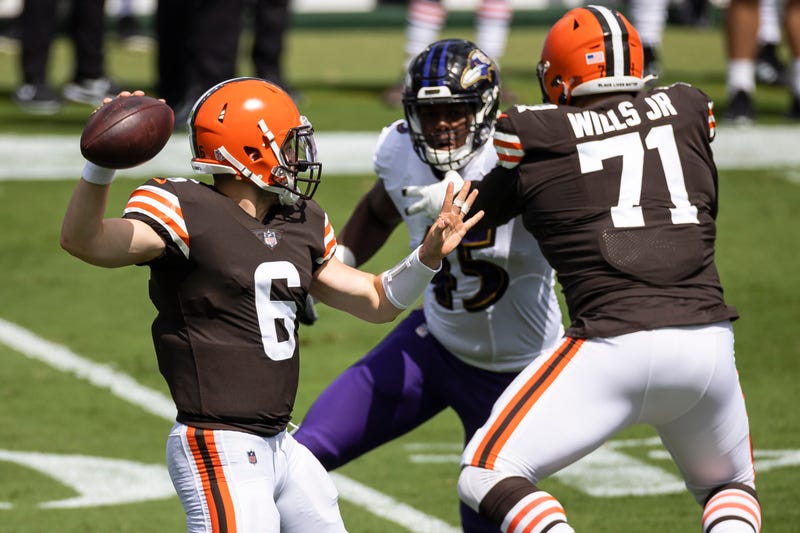 Baker Mayfield #6 of the Cleveland Browns looks to pass against the Baltimore Ravens during the first half at M&T Bank Stadium on September 13, 2020 in Baltimore, Maryland. Photo credit Scott Taetsch-Getty Images
By Daryl Ruiter

CLEVELAND, Ohio (92.3 The Fan) – It’s too early to tell if rookie left tackle Jedrick Wills will be available Thursday night against the Bengals but the team got good news after he left Sunday’s 38-6 loss in Baltimore.

Stefanski added Wills is “sore” a day after making his NFL debut and suffering the injury that forced him to miss the remainder of the game.

Wills, who played 57 snaps Sunday, made the switch from right tackle where he played at Alabama to left tackle and aside from a holding penalty, Stefanski gave him a positive review.

“I felt like Jedrick was good,” Stefanski said. “Can always be better. There’s some things we want to clean up with him technique-wise, but I would say it was a solid first outing.”

Kick change – Stefanski made it clear after Sunday’s game he was not happy with Austin Seibert, who clanked a PAT the left upright and was wide right by a mile on a 41-yard field goal.

Monday afternoon when asked about Seibert’s status Stefanski replied that they will “wait to gather more information.”

Shortly after, Seibert was waived and Cody Parkey added to the 53.

A Pro Bowler as a rookie, Parkey has made 102 of 121 field goal attempts and 154 of 162 PAT tries over his first six NFL seasons – his first two spent with Philadelphia and last three with Tennessee, Chicago and Miami since leaving and then returning to Cleveland.

Phillips update – Stefanski didn’t have much of an update on the knee injury suffered by linebacker Jacob Phillips.

Phillips posted a picture of his right leg wrapped in a brace on his Instagram story Sunday afternoon.

Note: The Browns did not practice Monday and participation is an estimate if they had.