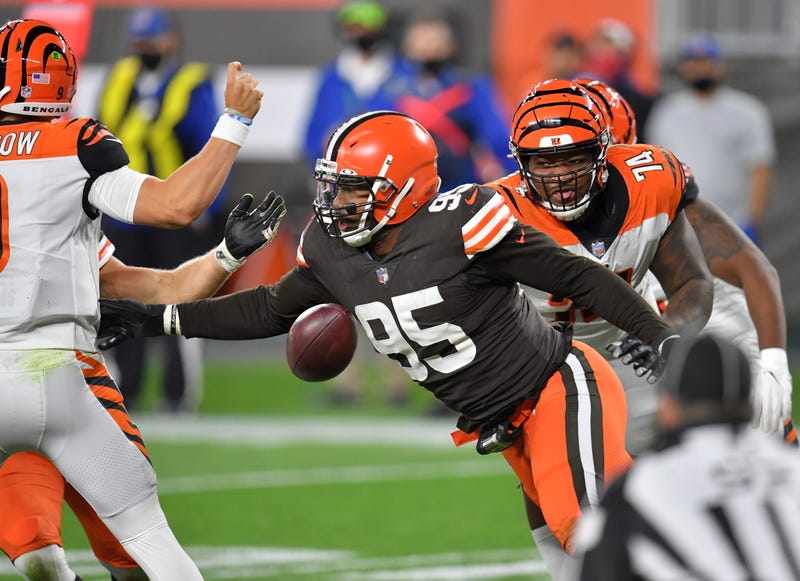 Myles Garrett #95 of the Cleveland Browns knocks the ball out of the hands of Joe Burrow #9 of the Cincinnati Bengals during the second half at FirstEnergy Stadium on September 17, 2020 in Cleveland, Ohio Photo credit Jason Miller-Getty Images
By Daryl Ruiter

CLEVELAND, Ohio (92.3 The Fan) – The Browns defense gave up 30 points, 30 first downs, 353 yards of offense and allowed the Bengals to convert all 5 fourth downs Thursday night.

It’s fair to say they didn’t make many plays, but the ones they did make were instrumental in the Browns 35-30 win over the Bengals.

Adrian Clayborn, starting in place of Olivier Vernon who was inactive with an abdominal injury, sacked Bengals rookie quarterback Joe Burrow on third down of the opening drive to force a 38-yard field goal.

Sheldon Richardson sacked Burrow on Cincinnati’s second drive which ended when Burrow tried to call timeout, but the ball was snapped past him for a 22-yard loss.

Garrett strip-sacked Burrow in the third quarter after the Bengals kept Nick Chubb and the Browns out of the endzone on fourth-and-goal at the 2 to give the offense another crack at it.

“When you take chances like that, you are depending on your team to be able to play for each other, playing ball and leaning on each other,” quarterback Baker Mayfield said. “Obviously, they threw the ball a lot tonight so they were tired, but Myles being able to get a rush on them, strip the ball and us get it right there on the goal line, it is a game changer.”

Cincinnati marched down to the 2 but the defense held and forced a 27-yard field goal after Porter Gustin dropped Burrow for a 7-yard loss with a sack on second down.

Go for it – Stefanski went for it on fourth down twice on their opening drive of the third quarter.

First, a fourth-and-2 at the Cincinnati 44 that saw Mayfield find receiver Jarvis Landry for 21 yards down to the 23.

After Nick Chubb had a potential 23-yard TD run reversed and the ball placed at the 1, he was denied on first and second down. After Mayfield’s third down pass to Odell Beckham was incomplete Stefanski turned to Chubb again, who was stopped short.

“I love it. Mad guts,” Garrett said. “If we can’t get that, shame on us. We have a good O line. We have great backs back there that fight for yardage. If he did it another two times, I think we get it those other two times. They just had our number that time. I believe in his play calling. I believe in those guys back there and their ability to get into the end zone.”

Capacity crowd – By order of the governor only 6,000 fans were permitted to take in Thursday night’s game.

Earlier in the week Mayfield playfully called for fans that would be in attendance to be “rowdy” and he was not disappointed.

Unhappy returns – Special teams gave Burrow and the Bengals shorter fields on 3 occasions and the short fields helped the Bengals put up 13 points.

Brandon Wilson ripped off a 42-yard kickoff return to open the game to set up a field goal drive. Wilson had a 45-yard kick return in the second quarter that was followed by Burrow’s first touchdown pass of his career.

Kicker Cody Parkey had a kickoff go out of bounds to give Cincinnati the ball at the 40 which ended in another Bengals field goal.

Orange surprise – When the Browns unveiled their uniforms in mid-April, they were missing something – orange pants.

The team held back the pants because they wanted to surprise fans with them and Thursday night, they got to make their debut to the delight of fans.

Injury report – Clayborn suffered a hip injury and did not return.