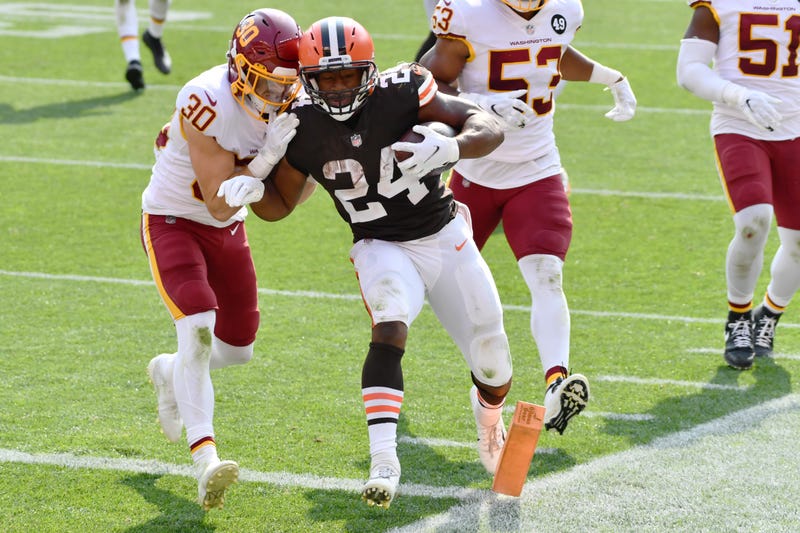 Somewhere choirs of angels are finally singing following Sunday’s 34-20 win over the Washington Football Team that saw the defense take the ball away 5 times and the offense turn the gifts into 24 points.

One could get used to this.

Here are this week’s game balls:

Nick Chubb – Duh. Chubb registered another ho-hum afternoon at the office – 108 yards and 2 touchdowns to become the first Browns back since Leroy Kelly in 1967 to surpass the century mark and score twice on the ground. Chubb has 13 100-yard games on his resume since being picked in the second round of the 2018 draft and he leads all running backs with 26 carries of 20 or more yards since then following runs of 25- and 20-yards Sunday.

Odell Beckham Jr. – Sure Beckham only caught 4 passes for 59 yards, but all 4 receptions went for first downs and 3 of them led to touchdowns. Beckham helped Baker Mayfield and the Browns convert a third-and-9 with an 18-yard catch, a second-and-9 with an 11-yard grab, a third-and-12 by picking up 15 and a second-and-10 with another 15-yard reception. Beckham also played defense by breaking up a deep ball that was thrown short by Mayfield intended for him, helping to end the quarterback’ consecutive games with an interception streak at 8.

Harrison Bryant – The rookie tight end only had 1 catch for 3 yards, but it went for 6. Catch your first career touchdown in a victory, get a game ball. Those are the rules.

Myles Garrett – Add two more sacks, a forced fumble and fumble recovery to the career total. Garrett’s strip sack of Dwayne Haskins in the fourth quarter prevented Washington from attempting a second comeback in the second half and set up the field goal that put the game on ice.

B.J. Goodson – The linebacker recovered a fumble at the end of the first half and came away with an interception in the fourth quarter. Goodson added 3 tackles and a pass break-up in the win as well.

Cody Parkey – Parkey was a busy guy Sunday. He made all 4 of his PATs and hit field goals of 42 and 30 yards. Parkey also prevented the kickoff unit from giving up any big returns – they entered the game worst in the league giving up nearly 38 yards per return – by kicking the ball into the end zone and getting touchbacks on all 7 kickoffs.