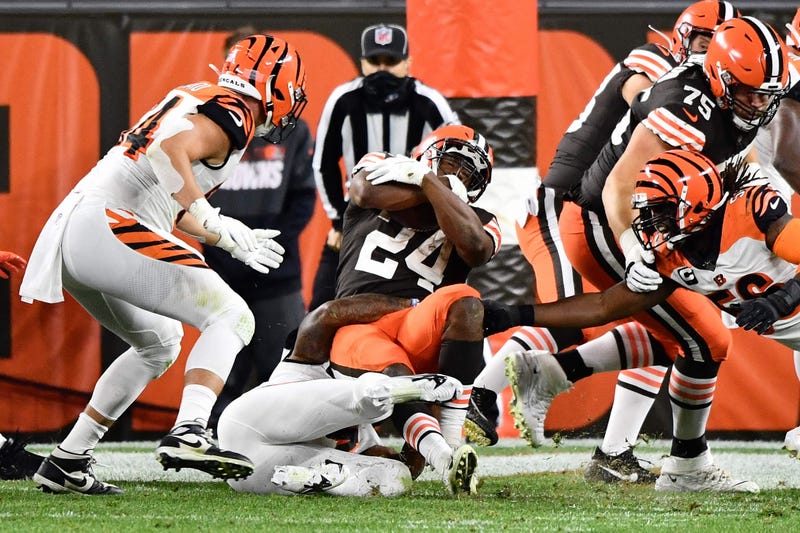 Nick Chubb #24 of the Cleveland Browns falls across the goal line for a third quarter touchdown against the Cincinnati Bengals at FirstEnergy Stadium on September 17, 2020 in Cleveland, Ohio. Cleveland defeated Cincinnati 35-30. Photo credit Jamie Sabau-Getty Images
By Daryl Ruiter

CLEVELAND, Ohio (92.3 The Fan) – The Browns bounced back in a big way Thursday night from a disastrous debut in Baltimore to beat the Bengals 35-30, giving Kevin Stefanski his first win as head coach.

After scoring just 6 against the Ravens, Stefanski’s offense put together 5 touchdown drives, racked up 215 yards rushing and did not allow a sack.

Here are our game balls from the victory, the first in a home opener for the team since 2015:

Kareem Hunt – 45 of Hunt’s 86 rushing yards came on the Browns’ final touchdown drive, including a 33-yard carry. He finished the drive off with a 1-yard TD run to seal the victory. Hunt also caught 2 passes for 15 yards, including a 9-yard touchdown.

Baker Mayfield – The 2018 No. 1 pick put a difficult debut behind him and picked up what felt like a ‘must win’ in Week 2. Mayfield completed 16 of 23 passes for 219 yards with a pair of touchdowns and an interception to finish with a 110.6 rating. His 43-yard touchdown to Odell Beckham Jr. was on time and on target.

Odell Beckham Jr. – Rumors of Beckham’s potential demise in Cleveland were greatly exaggerated. Beckham caught 4 of 6 targets for 74 yards and a 43-yard touchdown.

Myles Garrett – Garrett’s strip-sack of Bengals rookie quarterback Joe Burrow in the third quarter changed the trajectory of the game. After failing to punch it in on fourth-and-goal, the Browns had the Bengals pinned at the 1 but an offsides penalty and a couple of Joe Mixon runs allowed them to move out to the 12 before Garrett swooped in from the right side and swiped the ball out of Burrow’s hand. The Browns turned the turnover into 7 to go up 28-13, sucking whatever momentum the Bengals accumulated with the goal line stand away.

Kevin Stefanski – Win your first game as a head coach, get a game ball. Those are the rules. Stefanski’s game plan was brilliantly executed by his team and included a beautiful balance of runs, play action and passing. He becomes the youngest head coach to win a game in Browns history at 38 years, 132 days, surpassing Bill Belichick (39 years, 145 days).