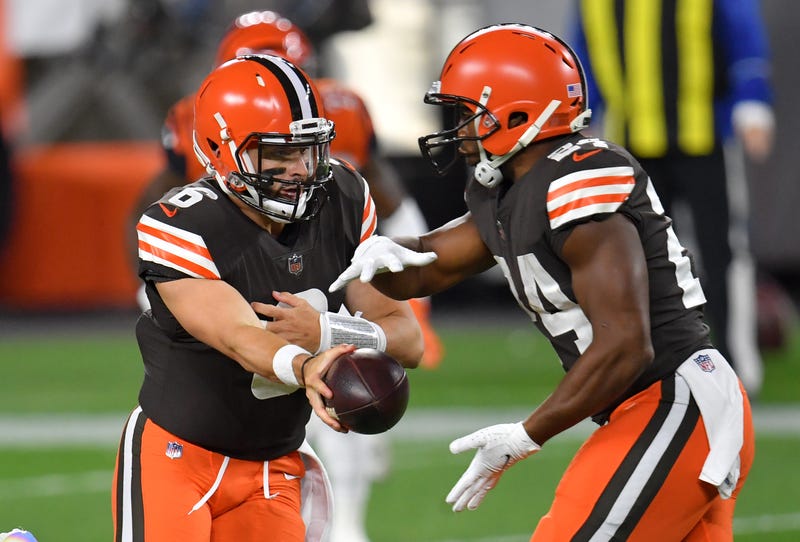 Baker Mayfield #6 hands off to Nick Chubb #24 of the Cleveland Browns against the Cincinnati Bengals during the first quarter at FirstEnergy Stadium on September 17, 2020 in Cleveland, Ohio. Photo credit Jason Miller/Getty Images
By Daryl Ruiter

CLEVELAND, Ohio (92.3 The Fan) – The Browns, coming off their first win of the season, host the Washington Football Team Sunday in search of a second straight.

Washington looks to bounce back from a 15-point loss in Week 2 while the Browns aim to build off a strong offensive performance against the Bengals and climb above .500 for the first time since the 2014 season.

What to watch for – Baker Mayfield and the Browns feel they may have found their winning formula last week against Cincinnati that saw them rush for 215 yards and rack up 434 yards of total offense in the 35-30 victory. Running backs Nick Chubb and Kareem Hunt scored four touchdowns between them and accounted for 234 of those scrimmage yards. Mayfield and Odell Beckham Jr. connected four times including a 43-yard touchdown.

Head coach Kevin Stefanski downplayed the notion this week that their offense is built and reliant on the run game and only time will tell what their identity in 2020 will be.

Could this be the breakout game for the Browns tight ends? Austin Hooper and Harrison Bryant have combined for 10 catches and 56 yards through two games.

Mayfield aims to end his eight-game interception streak while Washington’s Dwayne Haskins hasn’t thrown a pick in his last four games. Haskins completed a career-high tying 19 passes last week in a 3-15 loss to the Cardinals and he’s had a passer rating of 82.5 or higher in five of his first nine career starts.

Washington leads the NFL with 11 sacks, one more than Pittsburgh, through two games but eight of them came in their Week 1 win over the Eagles. Rookie and No. 2 overall pick Chase young has 2.5. Defensive end Ryan Kerrigan had 2.0 sacks and a fumble recovery in Week 1, and he has 18 games with two or more sacks in his career.

Browns defensive end Myles Garrett is looking forward to facing off with Young but aim to how he's the best player on the field. Garrett's strip sack in the third quarter last week turned momentum back in the Browns favor. Garrett's 31.5 career sacks in just 39 games ranks eighth all-time in NFL history.

The Browns elevated undrafted rookie free agent AJ Green Saturday, which doesn’t bode well for Denzel Ward, who suffered a groin injury Thursday during practice to give them options in the secondary. Green will revert back to the practice squad after the game under special league rules for the 2020 season. Greedy Williams will also miss his third straight game with a shoulder injury meaning Terrance Mitchell and Kevin Johnson, who returns from a lacerated liver suffered during training camp, will be tasked with keeping Washington receiver Terry McLaurin in check. McLaurin, who caught 58 passes for 919 yards as a rookie in 2019, already has 12 catches and is averaging over 15 yards per reception through two games.

Washington has scored 25 of their 42 points in the first two games this season in the fourth quarter while the Browns have done most of their damage in the first half, scoring 27 in the first 30 minutes.