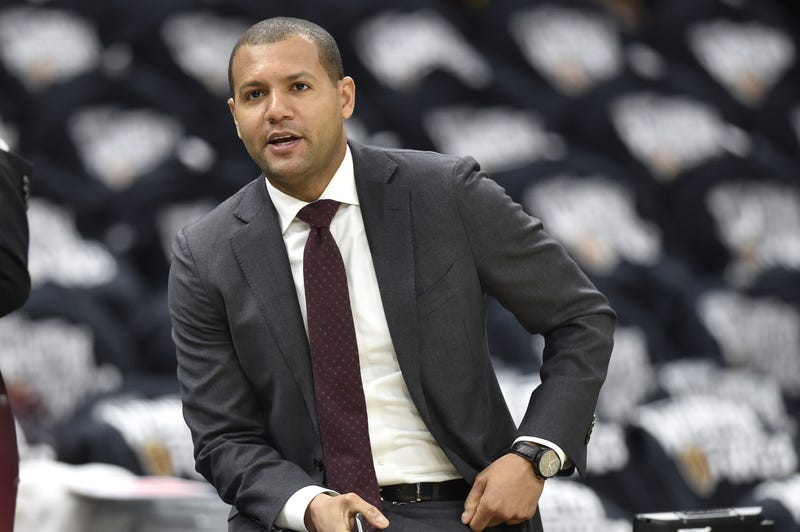 Cleveland Cavaliers general manager Koby Altman sits on the scorers table before a game against the Indiana Pacers in game one of the first round of the 2018 NBA Playoffs at Quicken Loans Arena. Photo credit © David Richard-USA TODAY Sports
By Anthony Lima

Most sports fans with a working brain know that while ownership, organizational structure, coaching and development all are vital for a functioning team, the most important facet of team-building is really luck. Yes the Cavs were horrible in 2002, tying for the worst record in the league by design, but they still needed the all-important lotto luck. The Cavs were even luckier in 2011, when Dan Gilbert spent $12 million in a deal involving an awful Baron Davis contract to purchase the lotto ticket to get them Kyrie Irving. They also won the lotto in back to back years in 2013 and 2014, which also helped yield them LeBron James and Kevin Love (LeBron's birthplace of Akron, Ohio certainly helped as well).

So yes, the Cavs have been one of the luckiest teams in NBA history. Four times they've gotten the no. 1 pick in the last 16 years, and had LeBron James been born in any oth​er city in the world, Cleveland would still be looking for its first title since 1948. However, the reservoir of luck ran dry the last two years, where they've totaled the fewest wins in the league but have only 2 no. 5 choices to show for it. Without luck on their side, the only way out of this post-LeBron mess is to draft well. Imagine that. No pressure Koby Altman...just the relevance of your franchise and the fact that your job is on the line.

In the last few days, I've received numerous texts that demonstrate just how wide open this draft is. That's a good thing and a bad thing.  The bad: with no consensus no. 1 pick this season, the Cavs brass has zero clue will actually be available at no. 5.  The good: There is a scenario where the Cavs' no. 1 choice could theoretically be spoon-fed to them at no. 5.

So who won't be available?  LeMelo Ball is getting some Penny Hardaway-like hype.  Despite what you've heard about his father, no team is passing on a 6-8 point guard who has played professionally and has his vision, passing and craftiness. Can he shoot? Probably not, but just like Ben Simmons, teams will assume that skill can be acquired.  Anthony Edwards' dynamic scoring, pull-up game, and athleticism will also be long gone by no. 5.  The biggest scouting mystery in recent years, James Wiseman will also be plucked based on the comparisons that range from Deandre Ayton to Chris Bosh. He played a whopping three games in college - two less than Darius Garland.

So who's left? Dayton's power forward scoring dynamo Obi Toppin (think Tobias Harris), Israeli scoring wing Deni Avdija, who turned heads against some top flight international competition but has as many skeptics as he has believers,ate Florida St. athletic freak Devin Vassell who has no discernible polish but has tantalizing measurables, Auburn's Isaac Okoro who draws too many comparisons to the never-developed Michael Kidd-Gilchrist, and USC's Onyeka Okonguwu, who showed scoring and shot blocking prowess instantly in the Pac 12 but has no go-to move and is probably a few years away from having a real NBA impact.

​Will any of these players provide the needed boost to get the Cavs out of the Eastern Conference basement and to help validate the front office's philosophies? Wouldn't count on it. But that's the beauty of the draft. On paper, nobody thought Dame Lillard, Steph Curry, Klay Thompson, Draymond Green, or the Greek Freak could jump off the paper and into basketball immortality. Maybe the Cavs can get lucky again?