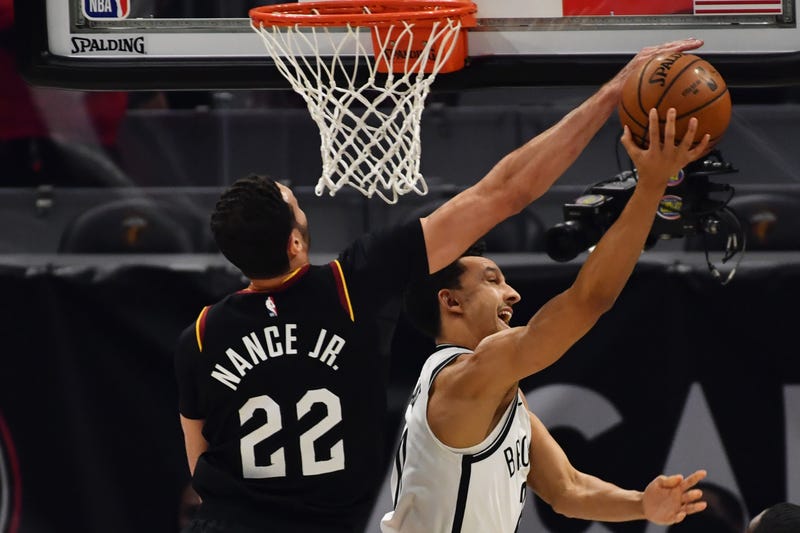 CLEVELAND, Ohio — Slowly but surely, the Cavaliers are getting healthy.

The wine and gold got two more pieces of the puzzle back Friday night in a 125-113 win over the Brooklyn Nets at Rocket Mortgage Fieldhouse.

“I think we’ve got back to moving the ball, playing with a little bit more pace and giving our guys space and opportunity to be creative,” Cavaliers head coach J.B. Bickerstaff said. “That makes us a better offensive team and makes us more difficult to guard as well.”

After missing the last eight games with a shoulder injury Darius Garland returned to the Cavaliers lineup. He quickly began familiarizing himself with the Cavs newest addition, Jarrett Allen.

Garland found Allen on a number of feeds throughout the night, most notably on a highlight-reel alley oop in transition as the Cavaliers pulled away from the Nets in the third quarter.

“He (Jarrett Allen) is really active, really long. Plays both ends of the floor. Runs the floor,” Garland said. “He caught the lob (after) I just threw it. It’s cool just being all the athleticism and having fun with him.”

It’s only his second game in a Cavalier uniform, but if the time that Allen spent airborne is any indication he looked as comfortable as ever taking feeds from Garland and Collin Sexton. The 6’11” center dumped in 19 points, as did Andre Drummond as the Cavs’ big men helped pile up 70 of their 125 points in the paint.

“Without the ball in his hands, on the offensive end of the floor he makes us better. That’s what is so impressive.,” Bickerstaff said. “His ability to screen and roll, His ability to find the proper spacing. All of his shots are layups and dunks because he’s in the right spot. He forces the defensive big to make a tough decision, do I give up this dunk or do I help on penetration?’”

Cleveland also out-rebounded Brooklyn 50-29 and despite the high-scoring affair, limited the Nets to shooting just 4-for-16 from beyond the arc in the second half. Brooklyn attempted 27 three-pointers in the first half.

“We had a really dominant performance on the glass. That gives you an opportunity, you know you’re liming it to one possession,” Bickerstaff said

Dylan Windler also returned to action Friday night. The second-year shooting guard has been out since opening night when he fell awkwardly and fractured his left hand. Windler missed his entire rookie campaign death with a stress fracture. His 16 minutes of playing time were easily a career high.

“It was awesome to have him back out on the floor. He’s a similar player to Larry in the fact that he keeps both sides of the floor moving,” Bickerstaff said. “He’s a great runner he’s a great cutter. He has the ability to make shots. Defensively he can chase, he gets deflections. He makes the game easier for everybody else.”

Finally, it feels like the Cavaliers can get back that Bickerstaff brand of basketball we flashes of early on.

It’s been a rocky start to the 2020-21 campaign, but when available as intended, the Cavaliers play with pace, run the floor and share the basketball. But injuries have robbed the Cavaliers of key contributors through large stretches of the early schedule.

Collin Sexton, Garland, Windler, Isaac Okoro and Andre Drummond all missed time last some point this season. Meanwhile, Kevin Love continues to recover from a strained calf and Matthew Dellavedova is battling back from a concussion.

“We believe we have good offensive players, a lot of them were just out,” Bickerstaff said. “So if people want to look at those numbers and not pay attention to that act then I think we’re misrepresented in that.

Still, the Cavs were able to tread water with their sights set on nights like tonight. A healthy Sexton, Garland combined with Isaac Okoro, Larry Nance Jr, and Drummond now looks to get acclimated to their new faces in Allen and Taurean Prince.

“Me and Jarrett have ben talking about what spots he likes the ball. When I’m driving I can’t throw any pocket passes to him because he said he’s either going to rebound or look for a bounce (pass),” Sexton said. “And then with TP  (Taurean Prince) he’s just like ‘I’ll be spaced out on the wing (or) on the corner ready to shoot.’”

The Cavaliers have now won three straight and are back above .500 (8-7) since they were 5-4 following a win over the Grizzlies on January 7th. The injuries not only forced shakeups to the starting lineup, but to the very foundation of Bickerstaff’s system

“I thought we started the year out pretty well, offensively. And then we had some injuries that happened,” Bickerstaff said. “Through those injuries we changed they way we had to play just so we could make sure we were competitive and stay in games.

The Nets were without Kevin Durant who sat out Friday night after playing 50-minutes in the Cavaliers 143-135 double-overtime win on Wednesday. Kyrie Irving attempted to pick up the slack, pouring in 38 points. Jame Harden added 19 points an 11 assists.

Their collective efforts weren’t enough to overtime an anxious Cavalier team ready to prove to the league they can run with the big guns.

After letting a 13-point lead slip away Wednesday night, the wine and gold kept the pedal down Friday evening by turning a 61-60 halftime lead into a 16-point cushion in the second half.

Cleveland outscored Brooklyn 37-24 in the third quarter as they closed out the win against the new-look Nets.

It’s early, but the pieces coming together are starting to form a more complete picture.

“I feel like it’s scary to see our potential,” Sexton said. “The sky is the limit for us.”