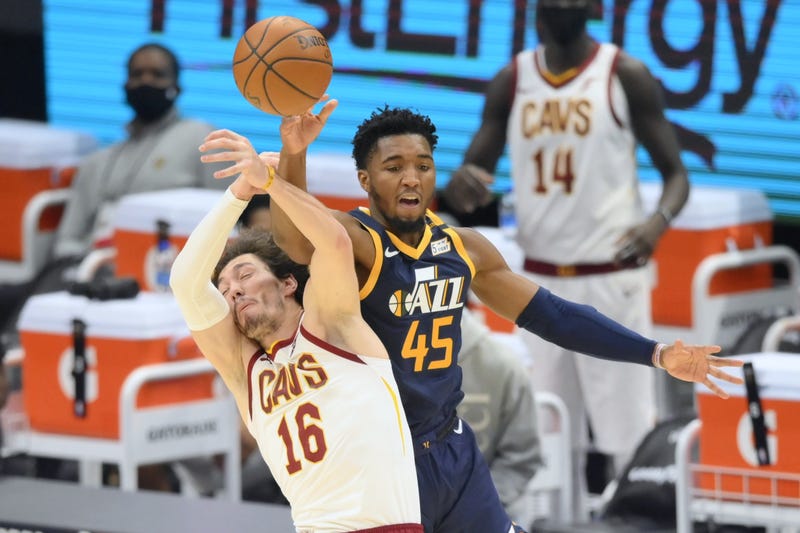 The Wine and Gold didn’t back down from a fight with a perennial playoff contender from the West as they battled the Utah Jazz without 4 of their 5 regular starters. Down Colin Sexton, Darius Garland, Kevin Love and Andre Drummond, the Cavaliers relied on JaVale McGee and Cedi Osman in the first quarter to keep it close against the Jazz 22-18 as they tallied 6 points apiece but coach JB Bickerstaff knows he was going to be missing his big man later in the game.

“He does a great job for us obviously when you lose that presence in the paint and 6 of your top 8 guys they’re going to be a drop off defensively,” said Bickerstaff after dealing without Drummond in the middle on Tuesday night.

Drummond’s absence start to be felt in the 2nd as it was former Cavalier Jordan Clarkson stepping up for Utah. The reserve guard cashed in 9 points off the bench in the 2nd stanza as the Jazz lead grew to 49-36 at half-time inside Rocket Mortgage Fieldhouse.

After halftime Donavan Mitchell woke up for Utah and the short-handed Wine and Gold couldn’t stay afloat as the “diff” ballooned to 28. Spida had 17 points in the 3rd while the Jazz held an 87-59 lead.

When it was all said and done Mitchell pushed the gas long enough to score 28 points and help push the Jazz to the 117-87 win over the depleted Cavaliers Tuesday night. Former Cavs Jordan Clarkson provided some backup for Mitchell with 21 off the bench while Cedi Osman finished as the high point man in Wine and Gold with 17.

“The group that was out there gave us what they had; we just struggle offensively with so much missing,” said Bickerstaff. “Obviously we all deal with the disappointment that our teammates are hurt but there’s also an acceptance of reality.”

The Wine and Gold get a chance to get back on track and potentially get some bodies back in time for their next game when they host the New York Knicks (5-6) Friday at Rocket Mortgage Fieldhouse.