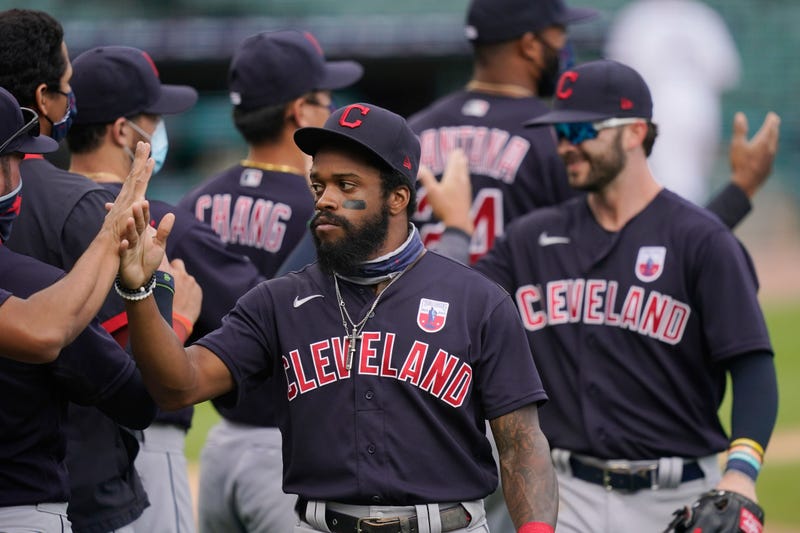 DETROIT (AP) — The Cleveland Indians beat Detroit for the 20th straight time, nearing the major league record for most wins by a team over a single opponent, as Franmil Reyes hit two home runs to defeat the Tigers 8-5 Sunday.

Baltimore holds the mark with 23 consecutive wins over Kansas City in 1969-70. The Indians can match the record when they host Detroit in a three-game series next weekend.

The New York Yankees currently have an active streak of 18 straight wins against the Orioles.

Francisco Lindor, Jose Ramirez and Sandy Leon also homered as the Indians connected a season-high five times. Reyes, who had three hits, homered three times in the three-game sweep, but exited in the ninth inning after being hit by a pitch in the left hand.

Cleveland broke a 4-all tie with a three-run sixth off reliever John Schreiber (0-1). Leon's solo home run, his first of the season, broke the tie and was the first run scored off Schreiber in his eighth appearance of the year.

Miguel Cabrera had a pair of game-tying singles, driving in three runs to move up to 22nd on the all-time list at 1,705. The 37-year-old Detroit star was in a 1-for-19 skid until his consecutive pair of singles.

Both starters allowed three runs over 2 2/3 innings, with Detroit's Michael Fulmer surrendering two home runs, falling behind 3-0 in the third.

After Cabrera's single tied it 3 in the bottom half, Jeimer Candelario hit a ball into the right-field corner that was trapped between the wall's padding and the ground. He advanced to third and Cabrera scored from first.

Cabrera was directed back to third and Candelario to second after the umpires ruled it a ground-rule double. An ensuing argument earned Tigers manager Ron Gardenhire an ejection, the first of his season and 85th of his career.

Oliver Perez (1-0) got the win in the first decision of his 18th season. Six Cleveland relievers combined to allow five hits and two runs in 6 1/3 innings.

Detroit's Cameron Maybin was ejected after grounding into a double play to end the fifth inning. He had been arguing balls and strikes during his at-bat and was tossed while walking toward the dugout.

Indians: Reyes was hit by a pitch from Joe Jimenez with one out in the ninth.

Tigers: SS Niko Goodrum left the game after four innings with right upper back tightness. … RHP Ivan Nova went on the disabled list Saturday with right triceps tendinitis. Top RHP prospect Casey Mize could be among the candidates in what would be his MLB debut.