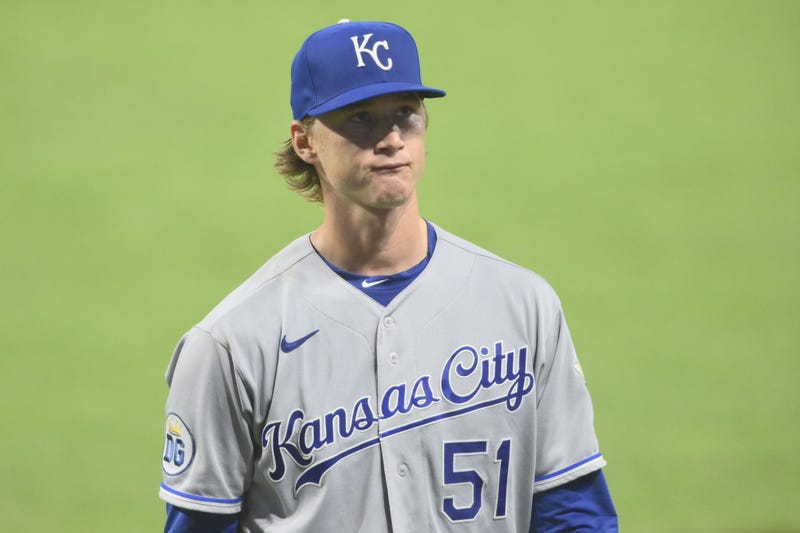 CLEVELAND (92.3 The Fan) – Brady Singer was unhittable for the Kansas City Royals on Thursday.

The rookie right-hander dominated against the Cleveland Indians' lineup as the Royals won 11-1.

Singer (2-4) pitched eight innings, striking out eight and gave up a hit.

"(Singer) was riding the ball down; a couple of guys said they couldn't see the ball at first – especially the slider," Indians interim manager Sandy Alomar said. "The low fastball was riding back into the zone. He had a good ride on his fastball. The plan was to give him space to go the other way, but I guess we went away from that plan pretty quick.

"I don't know if the guys were getting frustrated but he kept the ball down, and did a good job."

Singer didn't give up a hit until Austin Hedges stepped into the batter's box. On a full count, Hedges took a Singer slider and roped it into right field to break up the no-hitter.

"From a team standpoint ... thinking about the series going into Minnesota (on Friday)," Hedges said. "That's going to be a big series, and if you get no-hit, that kind of kills the good vibes. We definitely didn't want to walk out of here with a no-hitter against us."

In the last two games, the Indians (26-18) only managed to score a run. That run came in the ninth on a Mike Freeman RBI single scoring Cesar Hernandez.

"We have to say positive and be in a good spot," Alomar said about Cleveland's offense. "Keep pushing the envelope, to the season is finished. With all of this going on, we're still eight games over .500. We're in a great spot and we have to stay positive with that."

Kansas City (17-28) opened its offense in the third. Civale got the first two batters out of the inning and then got into trouble. He allowed Whit Merrifield and Adalberto Mondesi to reach base. In the next at-bat, Hunter Dozier drove in Merrifield to open the game's scoring. Maikel Franco brought in Mondesi and Dozier on a two-run single as the Royals led 3-0.

Edward Olivares gave the Royals a 4-0 lead with a home run blast to left field off Civale in the sixth.

"He did OK tonight," Alomar said. "He had a little problem after walking Mondesi because he was worrying about the runner on base. After that, he gave up that hit. Other than that, he did a pretty good job."

Kansas City added to its lead in the seventh when Franco hit a three-run home run off right-hander Dominic Leone – making the lead 7-0.

Kyle Nelson, who joined the Indians form their alternate site in Lake County on Wednesday, looked like a rookie. The rookie pitched 2/3 of an inning, gave up four runs and four hits in his MLB debut.