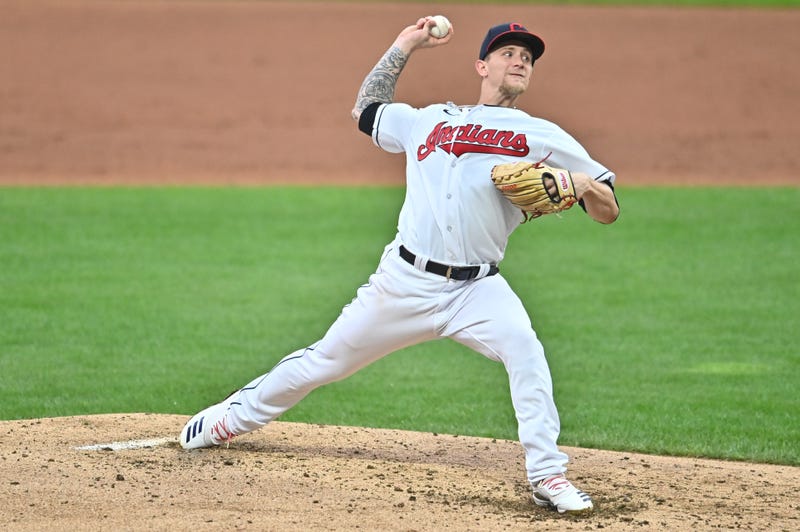 For starters, there were 31,946 fans in attendance that night as Plesac allowed one run in 5 2/3 innings, pitching the Indians to a 4-1 win over the Kanas City Royals.

Monday night there were none, but the 25-year-old right hander turned in his fifth-straight quality start as the Indians beat those same Royals 5-2 on Monday night.

For Plesac, it’s his second win in as many tries since returning to the Indians’ rotation after he was sent to Lake County for violating team rules regarding COVID-19 protocols.

“Two wins, that’s all you can ask for,” Plesac said.

Plesac scattered seven hits through seven innings but allowed only one earned run and no walks. He’s only allowed two free-passes all year.

“I think just consistency with my delivery has helped, a good game plan has helped,” Plesac said. ”Really just mentally having the attitude that I’m trying to pitch as deep as I can in the game and the only way that’s going to happen is if I pound the zone and mix speeds.”

Offensively, the Indians took a few innings to solve Brad Keller but touched up the righty for five runs (four earned) on five hits in 6 2/3 innings. Keller allowed one run on three hits in 6 1/3 innings one week ago against the Tribe.

“Guys were able to get him up in the zone and able to drive the ball. He’s been tough against us, he’s probably their best pitcher,” Indians acting manager Sandy Alomar Jr. said.
“We had a better approach today, not trying to pull everything just trying to hit middle-away and make him bring the ball up.”

That offense could be without Jose Ramirez when the Indians resume the series Tuesday night. The Indians’ third baseman left the game with left thumb discomfort in the top of the seventh inning and was replaced by Mike Freeman. Alomar Jr. said the club is prepared to use Freeman against the Royals again in game two of the four-game set.

“I think it’s kind of wearing him out mentally in my opinion. Today he felt it again. And we the decision to pul him out of the game just to give him a chance to recuperate. He he would’ve had to go out there and hit again he could’ve done more damage,” Alomar said. “We put (Mike) Freeman in there and we will re-evaluate him tomorrow. If Jose comes in and he feels 50-percent better and wants to play that’s up to him but we are leaning towards playing Freeman tomorrow.”

The Indians are now 5-2 against the Royals this season and will take aim at their eighth consecutive series win against Kansas City.

Rookie Triston McKenzie will make his fourth start at 6:10.

-The Royals have lost seven straight games—in which they’ve been out-scored 51-18.