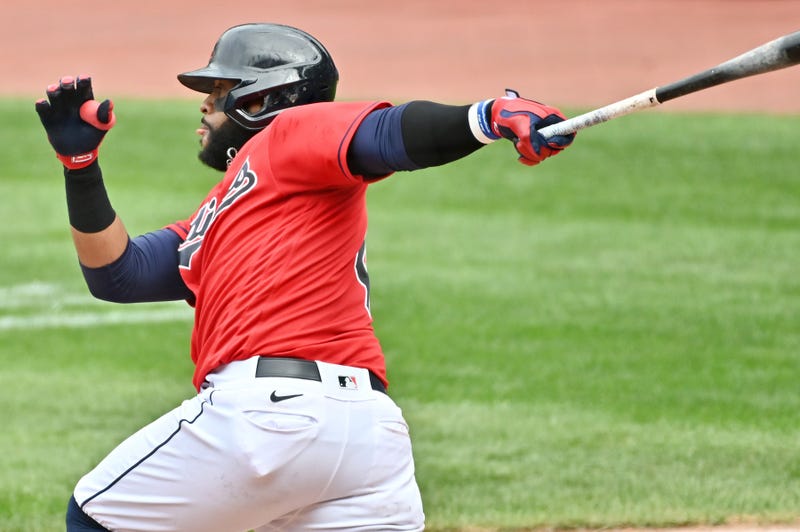 CLEVELAND, Ohio (92.3 The Fan) — Shane Bieber only went five innings but held the Milwaukee Brewers to just one run as Carlos Santana broke out of his slump to lead the Indians to a 4-1 victory Sunday at Progressive Field.

Santana snapped an 0-for-13 skid in the bottom of the first when he roped a double down the left field line, scoring José Ramírez from second to put the Tribe on the board first. He finished the day with two hits and a walk while driving in two.

Prior to Sunday, in his last seven games Santana had just three hits while drawing no walks. No walks in seven games for Santana is about as surprising a stat as one could expect to see in any season.

The 34-year-old has yet to find himself at the plate this season. While Santana does lead all of baseball in the walk category, he has not produced like the club has expected coming off a career year in 2019.

The production has been there from the top third of the order and Franmil Reyes has been one of the hottest hitters in baseball over the last month. Sunday was a much needed day for Santana and he could be the key to a more consistent offense moving forward.

Bieber started the afternoon with a perfect three innings while striking out seven. The first time around the order the UC Santa Barbara product looked to have some of his best stuff of the season working.

In the next two innings Brewers hitters tallied five hits but only managed to get one runner across. Bieber had to work his way out of jams in both innings, capping of the fifth with a bases loaded strikeout of reigning NL MVP Christian Yelich.

The righty ended the the day tossing five innings allowing five hits, a walk with that one earned run in the fifth while striking out 10. It was the sixth time this season Bieber has fanned at least 10. No other pitcher has more than four such outings in 2020. Full steam ahead towards that Cy Young trophy.

Not enough can be said about how good the bullpen has been this season, either. Brad Hand remained perfect in save situations, notching his 11th of the season. Phil Maton, Dominic Leone and Nick Wittgren all tossed scoreless frames leading up to Hand in the ninth to secure win number seven on the season for Bieber. It was Hand’s 100th save of his career.

The Indians will be back in action when the host the first of four with Kansas City. Zach Plesac will face of with Brad Keller of the Royals.