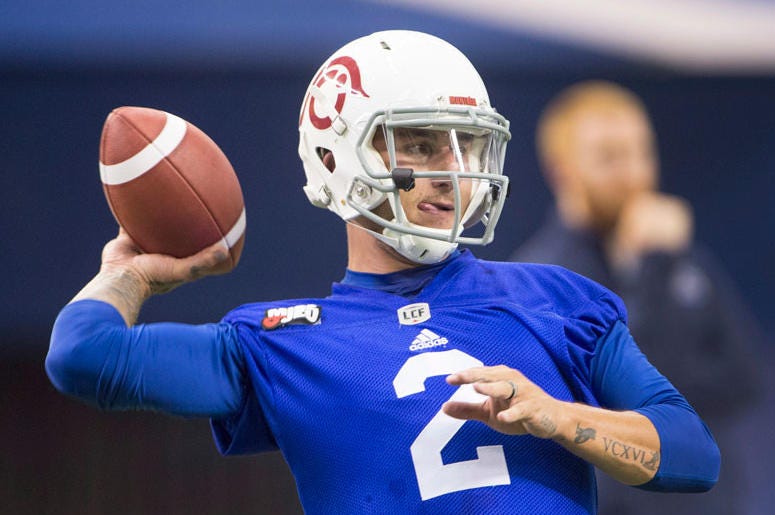 DALLAS (105.3 The Fan) -- Controversial quarterback Johnny Manziel was released by the Montreal Alouettes of the Canadian Football League on Wednesday and banned from signing a new contract in the league.

"The Montreal Alouettes have been directed by the Canadian Fooball League to terminate the player contract of international quarterback Johnny Manziel after it was found that he had contravened the agreement, which made him eligible to play in the league," the team said in a press release.

Alouettes general manager Kavis Reed was quoted in the statement: "We are disappointed by this turn of events. Johnny was provided a great deal of support by our organization, in collaboration with the CFL, but he has been unable to abide by the terms of his agreement. We worked with the league and presented alternatives to Johnny, who was unwilling to proceed."

It's not known what Manziel did to violate his agreement with the CFL.

I want to thank Coach Sherman, my teammates, and the CFL fans. My time there reestablished my love for the game of football and the work that goes into it. I look forward to exploring new options within the United States.

One option for Manziel could be the Alliance of American Football, which kicked off its inaugural season in early February. Manziel also has said he was intrigued by the prospect of playing in the Xtreme Football League (XFL), which is set to relaunch next year.

Manziel, 26, was a college football sensation known as "Johnny Football" and won the Heisman Trophy following the 2012 season at Texas A&M. He was a first-round NFL draft pick of the Cleveland Browns in 2014, but played in just 15 games in two seasons (he went 2-6 as a starter) before he was released.

Manziel was charged with assault following an incident with his ex-girlfriend in early 2016 in Dallas, and later reached a plea agreement in the case. He also was treated for substance abuse during his NFL career.

Manziel went 2-6 for the Alouettes last season, completing 64.2 percent of his passes for 1,290 yards with five TDs and seven interceptions. He also ran for 215 yards on 29 carries as Montreal missed the CFL playoffs.