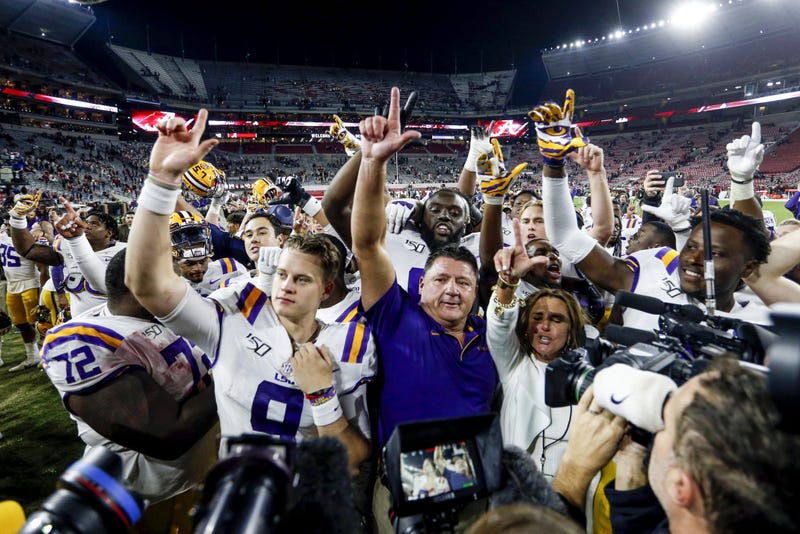 Tiger football stays at #18 in the latest @CFBPlayoff rankings. Memphis is one of three AAC teams in this week's rankings (Cincinnati, #19; SMU, #25) #GoTigersGo #KeepCLIMBing pic.twitter.com/fGJYud9vg0

The College Football Playoff rankings were unchanged at the top this week, with LSU first followed by Ohio State, Clemson and Georgia.

The committee could face an interesting decision with Alabama in the coming weeks. The Crimson Tide lost quarterback Tua Tagovailoa for the season to a hip injury Saturday. Alabama faces Western Carolina this weekend, so playing backup Mac Jones shouldn’t make much difference. On Thanksgiving weekend, the Tide will face Auburn with its No. 2 quarterback, which should give the committee a better read on what kind of a team Alabama is now.

“We do not look forward,” said committee chairman Rob Mullens, who is also Oregon’s athletic director. “Our charge is to rank the teams based on their body of work through week 12, and that's what we did. Obviously, we'll watch the games moving forward and evaluate them after that.”

Minnesota and Baylor, both of which lost for the first time last weekend, dropped in the rankings. Minnesota went from eighth to 10th after losing at Iowa. Baylor slipped from 13th to 14th after blowing a 25-point lead to Oklahoma.

Ohio State and Penn State play this weekend in a game that could essentially eliminate the Nittany Lions from the playoff race.

The highest ranked team from outside the Power Five conferences is Memphis at 18th, one ahead of American Athletic Conference rival Cincinnati, and two ahead of Boise State from the Mountain West.

The highest-ranked team from outside the Power Five with a conference championship receives a bid to one of the New Year’s Six bowls.

WHERE IS THIS GOING?

It certainly looks as if the Southeastern Conference is positioned to have two teams in the final four, but it’s far from a slam dunk.

Tagovailoa’s injury complicates the evaluation of Alabama, and it is difficult to see how it does anything but harm the Crimson Tide’s chances. There is no way to argue the Tide is as good without one of the two or three best quarterbacks in the country and with a backup who has shown to be capable but not a star.

“We are aware of who's available in what games, and we make an evaluation based on watching the games and the results,” Mullens said.

Of course, the rest of Alabama’s roster is still about as talented and deep as it gets in college football. There is a case to be made that if Jones and Alabama win at Auburn in impressive fashion they could get the Cardale Jones bump from the committee. You might remember in 2014, Jones stepped in for an injured J.T. Barrett in the Big Ten championship game and led Ohio State to a historic 59-0 rout of Wisconsin. That game nudged the Buckeyes past TCU and Baylor and into the fourth seed.

The problem for Alabama is unless LSU collapses down the stretch, the Tide is locked out of the SEC championship game. Alabama was probably going to need some help working its way back into the top four even before Tagovailoa’s injury. Now, it seems the Tide will need some real chaos in other conferences to extend its streak of playoff appearances to six.

So that leaves LSU and Georgia sitting in the top four and on course to meet in the SEC championship game. Barring upsets over the next two weeks, LSU will enter unbeaten and Georgia will be 11-1. (Note: Texas A&M is now the SEC’s Agent of Chaos, playing at Georgia on Saturday and at LSU next week).

If Georgia were to win the SEC, beating an unbeaten LSU in the process, it is probably safe to assume the Tigers would still have done enough with victories against Alabama, Florida, Auburn and Texas to stay in the top four.

Neither scenario seems likely this time around, though there are some real traps laid out for the teams at the top of the Big 12 over the next two weeks and many of the Big Ten’ best teams still have to play each other.

LSU winning out and handing Georgia a second loss probably shuts down any chance of the SEC getting two teams in the playoff, but here’s a tricky one. If the Bulldogs lose to Texas A&M and beat LSU, does the committee leave out Georgia and still go with LSU?

Here’s the big question: If the SEC gets two teams in this year, shutting out 12-1 champions from the Big 12 and Pac-12, do those conference join the Big Ten and start making serious noise about expansion?