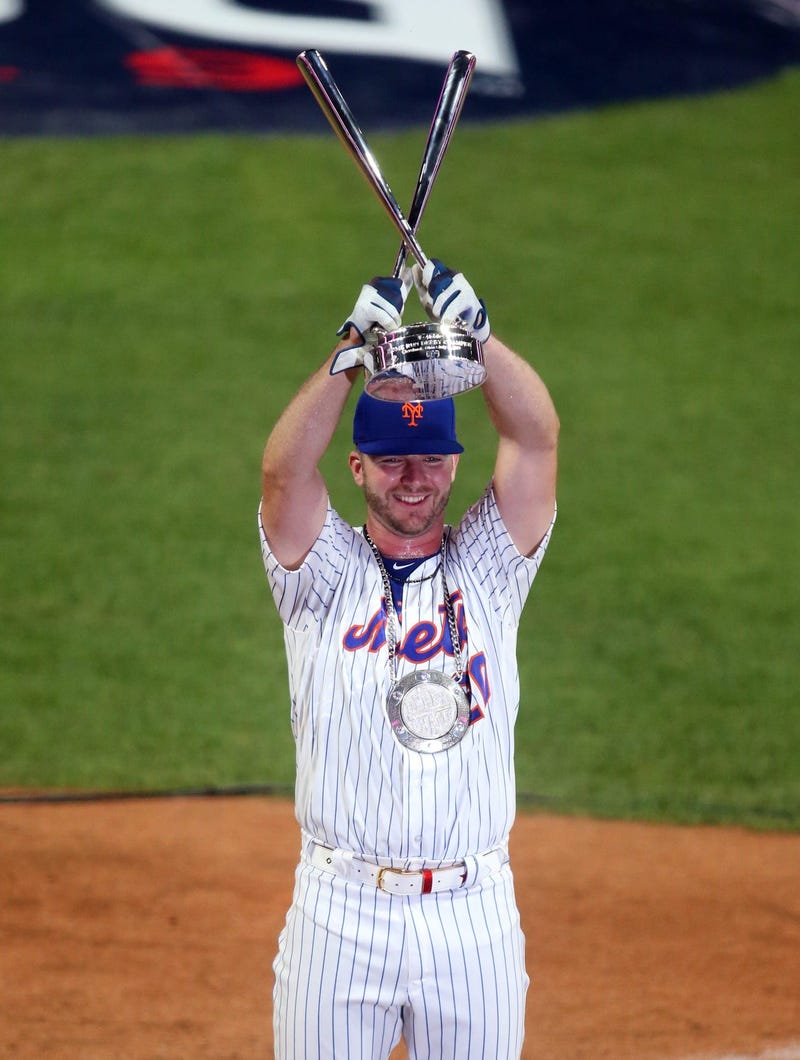 Click the above image to listen to Gary Parrish on the Geoff Calkins Show (w/Jeffrey Wright) discussing the 2019 Home Run Derby.

CLEVELAND (AP) — Pete Alonso took one final swing and flipped his bat high in the air. Another walk-off.

As the crowd roared, the New York Mets rookie headed toward the mound and tightly squeezed his cousin and pitcher Derek Morgan, who had helped him win the All-Star Home Run Derby and $1 million.

Alonso outlasted a worn-down fellow rookie Vladimir Guerrero Jr. in the final round Monday night to take home a prize that nearly doubled his 2019 salary.

With just seconds to spare, Alonso connected for a homer to left-center to edge Guerrero 23-22 after the Blue Jays' powerhouse put on a historic display by hitting 91 homers before he ran out of gas following an epic semifinal matchup against Dodgers outfielder Joc Pederson.

"There's so many guys that just put on a show, like Joc, he was amazing, Vladdy, they did such a good job," Alonso said. "Everybody put on a show. To me it didn't really seem like the jitters were there, because everyone was awesome. I mean everyone was showing their stuff."

After his last homer cleared the wall, Alonso was swarmed by the NL All-Stars who along with a crowd of 36,119 fans were treated to a power display unlike any in the event's history.

"This was surreal," Alonso said.

Alonso is the second rookie to win outright, following Yankees star Aaron Judge in 2017. He's also the first Mets player to win the derby since Darryl Strawberry shared the title with Wally Joyner in 1986.

Alonso, making the major league minimum of $555,000 this season, has hit 30 home runs. The first baseman will showcase his swing again in Tuesday night's All-Star Game as baseball continues this season of the longball.

And he'll also give 10% of his prize money to charity — 5% each to the Wounded Warrior Project and to the Tunnel to Towers Foundation.

"I've been living a fantasy," Alonso said. "And I just want to use my platform as almost kind of just reach out to people and just make people aware of these causes. And I hope that other people could find the kindness in their hearts."

One of the only bright spots this season for the struggling Mets, Alonso gave New York's NL fans something to brag about while the Yankees chase another title.

He showed some dramatic flair with two nail-biting wins to reach the final against Guerrero. He nipped Cleveland's Carlos Santana 14-13 in the first round and Atlanta's Ronald Acuña Jr. 20-19 in the second to set up a showdown with the 20-year-old Guerrero, whose Hall of Fame father won the event in 2007.

With one of baseball's most fearsome swings, Guerrero figured to be a force but there was no way of predicting he'd hit 91 homers — 74 more than his dad's entire total 12 years ago.

Following the event, Guerrero slowly walked to his chair in the clubhouse and sat down.

"I was kind of scared he was going to beat me because he was hitting second," Guerrero said through a translator. "It was back-and-forth and back-and forth. It was really tiring."

Guerrero defeated Pederson in a semifinal that required three extra swing(ings) and will go down in derby lore.

They were tied 29-all after their four-minute round and then again following a 60-second session. Guerrero and Pederson then each homered once when given three swings, forcing another best-of-three round.

Guerrero hit two, screaming at his second shot, which barely cleared the 19-foot high wall in left. Pederson couldn't match up, hitting a grounder on his final cut before both players shared an exhausted embrace near home plate as the fellow All-Stars stood and applauded like regular fans.

The last Home Run Derby in Cleveland was also won by a New Yorker — Yankees first baseman Tino Martinez, who took the 1997 crown over a field which included Hall of Famers Ken Griffey Jr. and Jim Thome, who didn't clear the walls once.

Santana fared better than Thome, hitting 13 dingers in the first round. But Alonso rallied with two homers in the final 15 seconds to hit 14 as the Cleveland crowd sneered.

"I didn't think I'd ever be booed at a Home Run Derby, to be honest with you," Alonso said. "But I guess that's the hometown home cooking."

The derby lost its top seed on Sunday as Christian Yelich, the reigning NL MVP and current home-run leader, withdrew from the contest citing a nagging back issue. Yelich didn't want to risk injury and his decision was certainly welcomed news to the Milwaukee Brewers.

Yelich, who is still playing in Tuesday's game, was replaced by Oakland's Matt Chapman, who had the misfortune of being paired against the hard-swinging Guerrero in the first round.

When the ballpark gates opened at 5:30 fans, most of them wearing gloves, scrambled down the concourses to secure prime standing-room-only spots along the railing above the left-field wall and behind the lower bowl seats in right.

They were hoping to see some moon shots, towering drives and monstrous blasts from a group that didn't disappoint with 312 total homers.

Alonso needed some time to get warmed up, but once he did, there was no stopping him.

"After we finally got in that rhythm it was money," he said. "It was money."