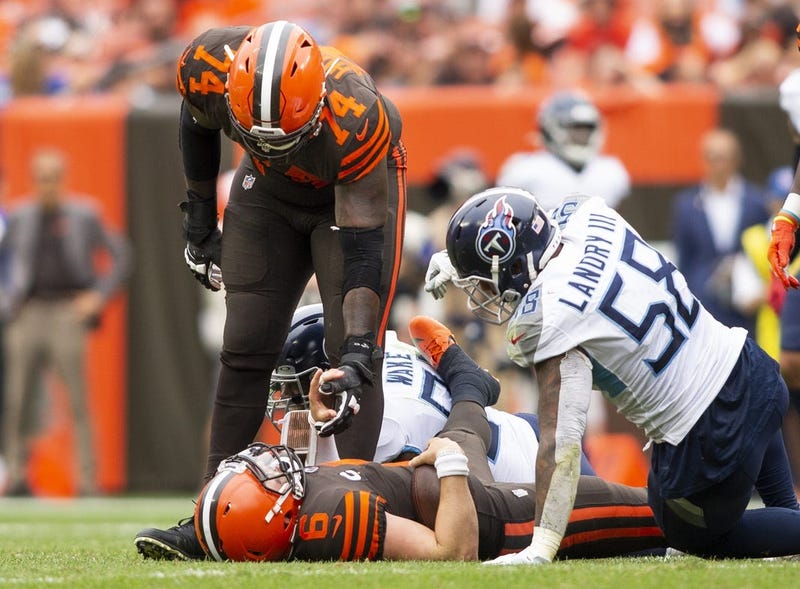 CLEVELAND (AP) — The Titans ignored all the hoopla about the ballyhooed Browns, and maybe made some hype of their own.

Marcus Mariota threw three touchdown passes — one a backbreaking, 75-yarder on a screen to big back Derrick Henry — and Tennessee rolled to a 43-13 rout Sunday over Cleveland, which fizzled in its highly anticipated opener.

Walker was one of several Titans who grew tired of the pregame attention paid to the Browns.

"You all can crown them if you want to crown them," Walker said. "We still have to play football."

Before reporters were allowed into Tennessee's locker room, several loud cheers could be heard in the outside hallway as coach Mike Vrabel handed out game balls.

"It's really all about us," Mariota said. "All the outside noise, all those things that people say you can't control. We don't focus on that at all. It was a great team win. All across the board."

Cameron Wake sacked Mayfield in the end zone for a safety in the first half, and the Titans dominated the undisciplined and perhaps overblown Browns, picked by some to contend for a Super Bowl title after adding Odell Beckham Jr.

"You have to make plays, so things the crowd doesn't agree with, like sacking the quarterback or taking the ball away, cornerback Malcolm Butler said. "It's all about momentum."

The performance left Cleveland fans wondering if they've been duped. The Browns are 1-19-1 in openers since 1999.

Following the game, Mayfield had X-rays taken and he left FirstEnergy Stadium with his right wrist wrapped. X-rays were negative.

The Titans always seem to be overlooked, but after just missing the playoffs last season, Vrabel had his team ready.

Mariota finished 14 of 24 for 248 yards, completing his two scoring passes to Walker in a span of 3:29 of the final quarter when the Titans opened a 23-point lead.

"He was composed," Vrabel said of Mariota. "He got us into all the right plays. They were pressuring, and some of those things weren't easy. It wasn't perfect. He will tell you he missed some throws, but he competed."

Mayfield, who took several big hits while playing behind a patchwork line, brought Cleveland within 15-13 with a 3-yard TD pass to David Njoku. But the Titans countered immediately as Henry, who sat out the preseason with a calf injury, took a short pass, picked up a few blocks and rumbled down the sideline for the long score.

"I knew going in we had an opportunity with that play," Mariota said. "We just hit it. I knew if I could get the ball to Derrick he was going to have a chance. When you get that guy in space he's tough to tackle."

Kevin Byard picked off Mayfield moments later, and Mariota connected with Walker for an 11-yard score. The three-time Pro Bowler was making his return after suffering a season-ending broken leg in last year's opener.

Mayfield was then picked for the second time and Tennessee's Logan Ryan led the entire defense to the far end of the field, where they taunted Cleveland's rabid Dawg Pound section.

Mayfield went 25 of 38 for 285 yards, with his last throw returned 38 yards for a TD by Malcolm Butler. Beckham finished with seven catches for 71 yards in his Cleveland debut.

The first half was a mess for the Browns, highlighted by Robinson's ejection. Robinson was on the ground during a running play when he extended his leg and drilled an unsuspecting Vaccaro.

"We do not tolerate that," Kitchens said. "That is unacceptable."

The Titans were down two starting offensive linemen as Pro Bowl left tackle Taylor Lewan served the first game of his four-game suspension for violating the league's policy on performance-enhancing drugs and right guard Kevin Pamphile was inactive.

Tennessee's Cairo Santos, signed earlier this week, made two field goals, from 53 and 37 yards. Santos was brought in after Ryan Succop was placed on injured reserve.

Browns: RB Dontrell Hilliard left with a concussion in the first half. ... Lamm never returned after going down. ... TE Demetrius Harris left briefly with a right shoulder injury.

Titans: host Indianapolis on Sunday. The Colts won both meetings last season by an average of 22 points.

Browns: visit the New York Jets on Sept. 16 in matchup of first teams to play on Monday night.

Here's the full list of scores from around the NFL (Week 1):

Monday Night Football: Texans vs. Saints then Broncos vs. Raiders