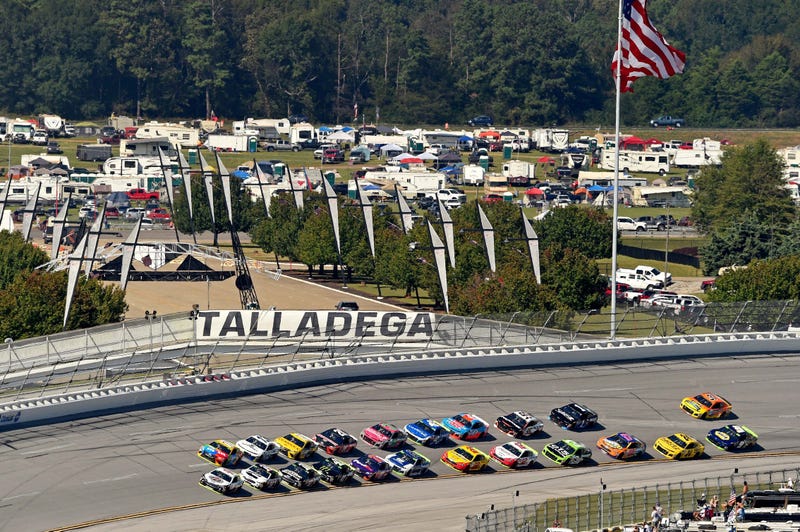 (NASCAR AUDIO-click above image): Grant Lynch, Chairman of Talladega Super Speedway, discussed this year's Talladega General Tire 200 Race, MoneyLion 300 Race, and the GEICO 500 Monster Energy NASCAR Cup Series Race with Brad Carson. Lynch also touched on his own retirement from the Speedway, NASCAR adjustments made this past year to the cars, and talked about country star Granger Smith's performance at Talladega this year.

Get tickets to these by calling 855-518-RACE or TalladegaSuperspeedway.com

“Big One on the Blvd.” on Friday night at 7 p.m. CDT – NASCAR drivers parade & oversee fan competitions. We will have four all-new outrageous fan competitions you’ll have to see to believe.

Weenie in the Hole - Do you have good aim? Well hot diggity dog! Weenie in the Hole is just for you! Three contestants will face off to get as many jumbo hotdog weenies in the hole of their buckets before the clock runs out - using only their mouths! The contestant with the most successful weenie drops will receive $100!

Cake Stand - CAKE STAND, CAKE STAND, DO SOMETHING CRAZY!!! Three teams of three will attempt to devour a delicious Talladega Superspeedway 50th anniversary cake while in keg stand position! Knees weak, arms are heavy? No problem, you can alternate with teammates! The first team to consume the entire cake will receive $300 and bragging rights!

Straight Arm’d and Delicious - Pour some sugar on me! In this straight arm relay challenge, three contestants will pour smoothies over their heads and try to catch as much liquid in their mouths as possible! Don’t swallow, because the contestant to fill up his or her designated bucket first will receive $250! You must be SMOOTH to win this competition!

BBQ Sauce Wrestling - BBQ Sauce Wrestling is back and better than ever! Four ladies will battle it out in a 500-gallon pit of BBQ sauce in order to capture their opponent’s flag! After two elimination rounds of best 2 out of 3, then an ultimate championship round, the BBQ Sauce Wrestling Queen will win a grand prize of $1,000! Are you saucy enough to take the challenge?

Saturday Night Infield Concert: Admission to the SNIC is FREE with a Sunday GEICO 500 ticket. Located at the intersection of Eastaboga and Talladega Blvds, beginning at 7 p.m. CDT.

Limited Time $69 Ticket Offer: The $69 ticket offer includes one Lincoln Grandstand ticket for the GEICO 500 and one Racing Electronics scanner and one headset, valid for the entire weekend, April 26-28.

Kids FREE on Friday & Saturday/As low as $15 Sunday: Kids 12 and younger can enjoy the GEICO 500 MENCS race for as low as $15 on Sunday while kids are admitted FREE in all grandstand and tower seats for Saturday’s MoneyLion 300 as well as Friday’s General Tire 200.

Kids VIP Experience Presented by Children’s of Alabama: Provides behind-the-scenes access for kids at NASCAR’s biggest track for kids 12 and younger prior to the GEICO 500.

Military & First Responders Appreciation: Talladega Superspeedway has special ticket offers for military and first responders (Police Officers, Firemen and EMT’s) and their families, for the GEICO 500 and MoneyLion 300.

Teachers & Educators Appreciation: Talladega recognizes and thanks educators and faculty members who work within our school districts to shape our youth into outstanding citizens. Those who work in the school system and qualify can save up to 30% off on various ticket options.

College Student Program: College students can purchase a $25 college ticket to attend the entire weekend full of festivities and racing, including the GEICO 500. Others accolades include: Free Entry to the Saturday Night Infield Concert and the “Big One on the Blvd.” party; Free parking and camping in the College Tailgate Zone in North Park all weekend (which includes a college party); and General Admission Seating in the grandstand.

The track, along with its parent company, International Speedway Corporation, announced last year Transformation - The Talladega Superspeedway Infield Project presented by Graybar. The approximate $50 million redevelopment endeavor is part of ISC’s long-term capital allocation plan and reinvestment into its major motorsports complexes. The project, highlighted by a one-of-a-kind Talladega Garage Experience, will feature “up-close” access, interactive attractions and enhanced amenities for fans, sponsors, teams and stakeholders in the iconic Talladega infield. Full completion of the modernized project is scheduled for October 2019. Ready for the spring tripleheader weekend will be the grand opening of the massive 2-lane Oversized Vehicle Tunnel (near Turn 3 entry) that will allow fans’ RVs, along with team haulers to enter and exit 24 hours. In addition, the 69-spot Finish Line Premium RV area will debut, along with new Infield Shower Trailers. Fans can learn more about the project by visiting www.talladegasuperspeedway.com/transformation. The track, which opened in 1969, will also celebrate its 50th Anniversary this year.