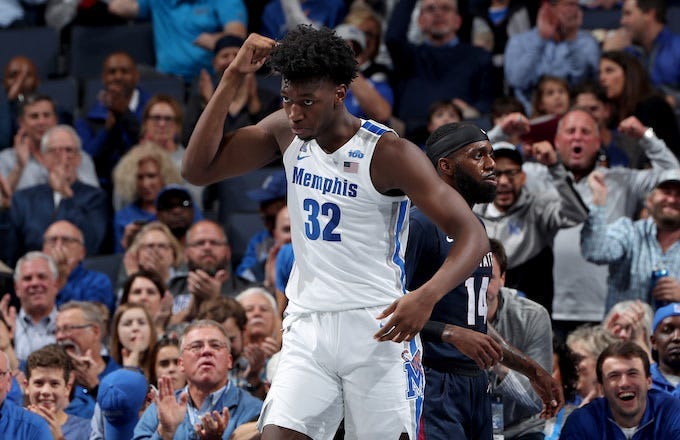 Memphis announces it will immediately appeal the NCAA's ruling. https://t.co/2KtHsvh9lO

University of Memphis just announced it will appeal James Wiseman's suspension."We expect a more fair and equitable resolution, and we will exhaust all avenues on James’ behalf. James will not compete in this evening’s contest."

The NCAA has suspended potential No. 1 pick James Wiseman of Memphis for 12 total games and will clear him on Jan. 12.

That's a big hit. I am certain Memphis will appeal in the hopes of getting this cut in half, much as Chase Young did. https://t.co/nXblAKXjQX

The NCAA's release does not mention Memphis having to vacate any games Wiseman participated in. https://t.co/2KtHsvh9lO

Eds: APNewsNow. Will be updated. With AP Photos.

The NCAA has cleared heralded freshman James Wiseman to return to the basketball court on Jan. 12.

Wiseman will sit out a total of 12 games under a decision announced by the NCAA.

The sports governing body also announced Wednesday that Wiseman must donate $11,500 to charity of his choice to regain his eligibility.

Wiseman withdrew his lawsuit against the NCAA on Nov. 14 after Memphis played him in the Tigers’ first three games of the season. The 16th-ranked Tigers were 2-1 with the 7-foot-1 center on the court.

Once Wiseman withdrew his lawsuit, Memphis held him out of a win over Alcorn State while working to resolve his eligibility status with the NCAA. His first game back will be when the Tigers visit South Florida.

The NCAA had ruled Wiseman was “likely ineligible” due to $11,500 coach Penny Hardaway gave the center’s family for moving expenses from Nashville to Memphis in the summer of 2017.