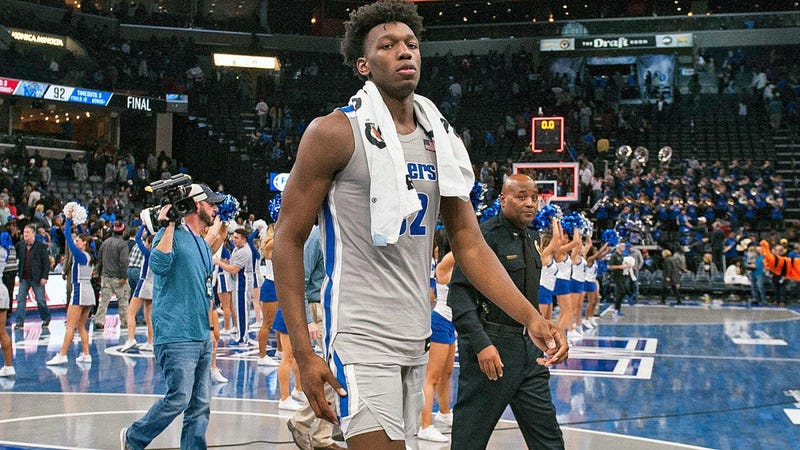 November 14, 2019 11/14/2019 4:58 pm
BREAKING NEWS: Memphis freshman James Wiseman has formally withdrawn his lawsuit against the NCAA and Memphis -- and is in the process of resolving his eligibility issues, per Gary Parrish
Memphis has announced that James Wiseman has been declared ineligible and that the school is now applying for reinstatement. The 5-star freshman will be withheld from competition until further notice, but is able to practice.

MEMPHIS, Tenn. (AP) — Freshman James Wiseman has withdrawn his lawsuit against the NCAA and Memphis, and the university has declared him ineligible while officials work to resolve the case.

Memphis says it supports Wiseman’s decision and believes it’s in the best interest of both the freshman and the Tigers’ basketball team to resolve his eligibility status through the NCAA process.

The university says it is immediately applying for Wiseman to be reinstated. Until then, Wiseman will be held out of games but can practice with the No. 13 Tigers (2-1).

Memphis says the NCAA is fully aware of “the unique nature and challenges” in this case and will give a fair decision.

Here's an updated story with the details surrounding James Wiseman withdrawing his lawsuit against the NCAA, Memphis ruling him ineligible and now applying for reinstatement: https://t.co/omDaouVbJh

The NCAA told Memphis and James Wiseman’s attorneys that it could not reach a resolution with Memphis with a lawsuit pending. That is the reason for Wiseman taking a nonsuit in the action. The case can be re-filed if a resolution is not reached. https://t.co/ncNfNK92KB

Statement from Memphis: "In order to move the matter forward, the University has declared James ineligible for competition and will immediately apply for his reinstatement. ... James will be withheld from competition but will continue to practice with the team."

According to Shelby County Chancery Court records, a notice of voluntary nonsuit has been filed in Wiseman vs. NCAA. Backs up what @GaryParrishCBS reported last night. Both sides are working toward a settlement. Expect to hear more soon.