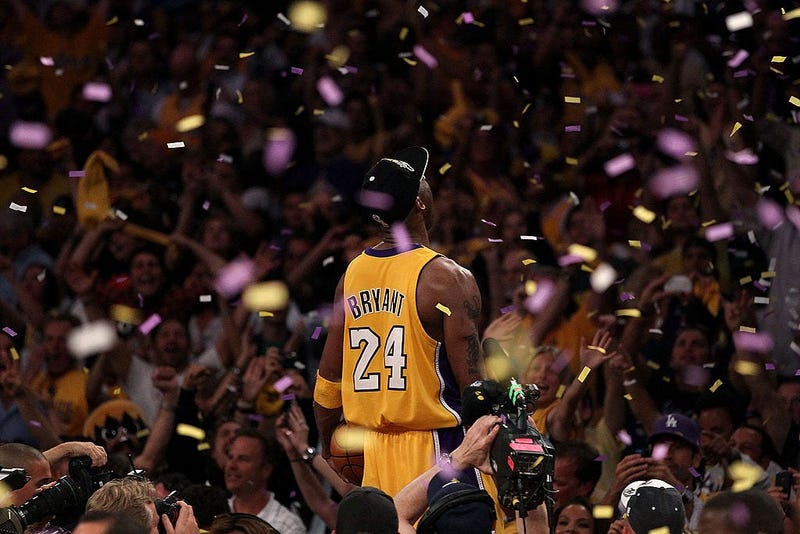 December 21, 2001- The day my relationship not only began with the Memphis Grizzlies, but also with Kobe Bryant.

My father walked into the kitchen of my 2nd childhood home and, in his hands, sat a pair of tickets to the Pyramid. A pair of tickets to see Shaq, Kobe, and the Los Angeles Lakers take on our, at the time, months-old Memphis Grizzlies. Miraculously, despite Kobe dropping 36, the Grizzlies won, sparking the fire and passion for basketball in the heart of 5-year old me. Little did I know, I had fallen in love with a team and discovered the basketball "villain" who would help drive my fandom for years to come.

My relationship with Kobe Bryant is a long and complicated one. For years, he tortured the Grizzlies and ripped out my heart- showing it to me, all while smiling. I feared and hated Kobe. My early years of fandom have a consistent through line...rooting against Kobe Bryant. Rooting against him every time he stepped in Memphis. Rooting against him in the Finals against the Pistons, Spurs, and Celtics. Rooting against him in MVP races with LeBron. Rooting against him in free agency. However, as time went on and Lakers' dominance faded, my relationship with Kobe changed. Hate turned into admiration. I'm thankful for this. I'm thankful I was able to watch Kobe at his peak, without a lens of animosity, but with one of respect. I was able to appreciate what Kobe meant not only to the NBA, but to the world in the last decade of his career. He was larger than life and mythical, in a sense. A hero to players and fans around the world not only for his on court heroics, but also for the way he carried himself off the court. The players we idolize, idolized Kobe.

It's not hyperbolic to say this is the saddest day in the NBA's history. Kobe was more than a basketball player. To his family, he was a son, husband, and father. To fans, he was a symbol and hero. To players, he was a mentor and friend. Kobe was a thousand different things at once, excelling at each in an almost impossible way-The Mamba Mentality.

Kobe's life/career is one filled with controversy, flaws, redemption, and triumph. Those much more wise and nuanced than me have written beautifully about his life since his tragic passing. So, I won't repeat that here. I would not do Kobe or those involved in his complicated story/legacy justice. Instead, I want to honor Kobe and his beautiful daughter, Gigi, with a list of moments. Moments that help define the life and legacy of an icon, paint the picture of a man who set the blueprint of professionalism and success for an entire generation, and explain why everyone yells, "KOBE" every time we throw away trash.

Top-10 Kobe Bryant moments:
10. Aug. 24, 2008 — Olympic gold-medal game vs. Spain
Kobe willed the 2008 team to victory finishing with 20 points (13 points in the 4th quarter) to secure his 2nd gold medal against Pau Gasol and Spain. Playing alongside emerging NBA superstars like LeBron James, Dwyane Wade and Chris Paul- Kobe was able to instill his work ethic and wisdom into the next generation. The next season all four players took their games to another level. One small example of the impact Kobe had on those around him and the friendship he had with fellow players.
9. April 12, 2013 — Two free throws with an Achilles’ tendon tear
Many use this as an example of the unreal competitiveness and drive Kobe possessed- The Mamba Mentality. After TEARING HIS ACHILLES, Kobe calmly walks to the free throw line, buries a pair of shots, and walks off to the locker room. A beautifully tragic moment ushered in a new era of Kobe. He would never be the same, but this moment was truly unbelievable.
8. March 16-23, 2007 — Four consecutive games with 50-plus points
This is cheating a little, but this stretch of games showed how lethal Kobe could be. Scoring 65 points against the Trail Blazers, 50 against Minnesota, 60 at Memphis and 50 at New Orleans in consecutive games, Kobe effortlessly imposed his will on opposing teams. The streak ended with a 43-point performance against Golden State. Pedestrian.
7. April 14, 2004 — Two-overtime victory vs. Portland
Kobe forced overtime with 1.1 seconds left by hitting one of the least likely threes you will ever see. Perfectly defended, Kobe twisted his body and freed himself for a millisecond to get off the shot. He sealed the game in double OT with another dagger. There were very few franchises tortured by Kobe more than Portland. Magical performance.
6. April 30, 2006- Game winning and tying shots vs Suns in '06 playoffs
Kobe has long been revered for his clutch play and late game heroics. This is a perfect example of both. Down 2 with 7.9 seconds left, the Lakers steal the ball and Kobe hits a damn near impossible layup to tie the game. In overtime, Kobe puts a bow on his performance by hitting an iconic fadeaway at the buzzer over two Suns defenders to win the game and take a 3-1 lead in the series. One of the best game winners in playoff history.
5. June 14, 2000 — Game 4 of NBA Finals vs. Indiana
A long-running basketball myth is Shaq carried Kobe. Did Shaq carry bigger share if the load? Sure. However, without Kobe, there are no rings. The Lakers needed both of them and this was on full display on June 14, 2000. Shaq fouled out with 36 points and 21 rebounds, but Kobe took the reigns and lead the Lakers to a 3-1 series lead.. Bryant’s 28 points included three clutch OT baskets to give the Lakers a 120-118 victory. Kobe and the Lakers would go on to clinch the first of five titles together a few nights later.
4. April 13, 2016- Kobe's last game and 60 points
Kobe Bryant had the greatest final game performance in the history of the NBA and he did it in the perfect Kobe fashion. Leading the lakers on a comeback against Utah, Kobe caught fire. The Staples Center could feel it in the air- He was going for 60. No one cared how many shots it may take, it needed to happen. It was the perfect way for Kobe to end his career. Leading the Lakers to victory and showing us, one last time, how special he was on the court.
3. June 4, 2000 — Game 7 Western Conference finals vs. Portland
The beginning of the Shaq/Kobe dynasty. The Lakers rallied from a 16-point deficit to stun Portland and their fans. The iconic duo finished off the comeback with an iconic play- the alley-oop. The first of many clutch moments that would come to help define his career. The Lakers would go on to win their first title with Shaq/Kobe. Poor Portland, destined to forever have their hearts ripped out by Kobe. Forever haunted by the Shaq double-point.
2. Jan. 22, 2006 — Career-high 81 points vs. Toronto
Kobe Bryant scored 81 points in a basketball game. Second only to Wilt Chamberlain’s 100-point performance, Kobe’s 81 points helped the Lakers overcome an 18-point third-quarter deficit. Kobe made 28 of 46 shots (60.9%), seven of 13 from three-point range (53.8%) and 18 of 20 free throws (90.0%). Legendary.
1. 2003-2020: Fatherhood
Kobe Bryant was more than a basketball player, much more. He was a philanthropist, Oscar winner, husband, son, and most importantly-father. From the outside looking in, it appeared Kobe adored his children and family. Kobe excelled at the most important thing he was tasked with and did so with love/admiration. Gianna, his 13-year old daughter that tragically passed with him, was primed to be the next WNBA phenom. All over the internet, you can find videos of the two of them bonding over what they loved-basketball. Kobe's playing days will always be the first thought to pop into people's heads when thinking about his legacy. However, his real and important legacy will be the three beautiful daughters and wife he left behind.

I want this to be forever https://t.co/38GayP8LrK

— J.A. Adande (@jadande) January 27, 2020
Kobe Bryant was a man that appeared to be invincible to many. It seemed like we were just getting to know Kobe. The real Kobe, at least. He had so much more to offer this world post-basketball. We'll never see his Hall of Fame speech, which seemed preposterous until yesterday. He would have relentlessly perfected that speech by studying MLK Jr, Obama, and Winston Churchill. He would have called their relatives to see what drove them and how they crafted their speeches. His speech and likely background video would have been Academy Award worthy, and then he’d move on the the next challenge. He played with World Peace...knowing Kobe, he’d have conquered that, too. Hold those in your life close, tell them you love them, and forget all the bullshit that may be causing a riff. Tomorrow is never guaranteed. Attack every day as Kobe would, with the Mamba mentality. Rest in power, Kobe. Rest in power, Gianna. Rest in power to all the precious lives lost. Mamba forever.