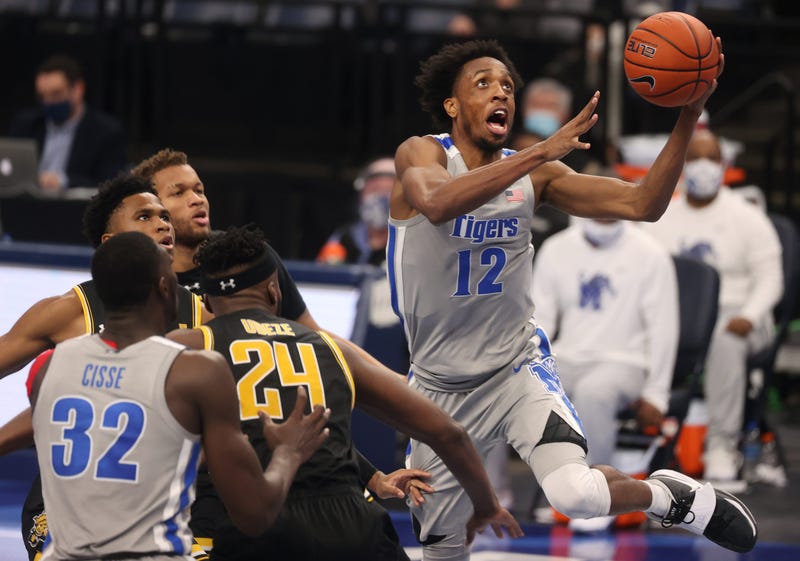 MEMPHIS, Tenn. (AP) — Landers Nolley II had 16 points and seven rebounds, and Moussa Cisse had 12 points and 10 rebounds to lift Memphis to a 72-52 win over Wichita State on Thursday night.

The Shockers’ 29.9 field-goal percentage represented the worst mark by a Memphis opponent this season.

Ricky Council IV had 13 points and seven rebounds for the Shockers (8-4, 4-2), which scored just 19 points in the first half. Morris Udeze added 10 points and Dexter Dennis had six rebounds.

From the University of Memphis PR Dept:

MEMPHIS, Tenn. – The Memphis Tigers exploded offensively in the second half and locked down on defense to pick up a 72-52 win over the Wichita State Shockers Thursday night at FedExForum.

Wichita State (8-4, 4-2 AAC) entered the game in second place in the American Athletic Conference standings, having won seven of its last eight games. The Tigers (7-5, 3-2 AAC) held the potent Wichita State offense to 22 points under its season average.

Memphis has now limited four-straight conference opponents to fewer than 60 points for the first time since 2008.

The win was head coach Penny Hardaway’s 50th from the top seat on the Tigers bench.

Memphis had 22 assists on 28 baskets to help facilitate the scoring.

The Tigers limited Wichita State’s Travis Etienne to three points on 1-of-12 shooting. Etienne entered the game as the conference’s second-highest scorer at 17.9 points per game.

Dialed in from distance, Memphis hit 11 3-pointers in the game, which was a season high. The Tigers shot a blistering 57.6 percent in the second half (19-33).

Both teams finished the half on a scoring drought, with Memphis missing its last six field goals and Wichita State going 1-of-10 heading into the locker room. The Tigers limited the Shockers to 25.7 percent shooting in the opening half (9-35) and forced misses on all 12 of Wichita State’s 3-point tries.

Wichita State’s 19 first-half points tied the fewest Memphis has allowed in a first period this season, joining Dec. 21 against Tulsa.

The Shockers got no closer than nine points down the stretch, and the Tigers cruised to their largest win in an AAC game since a 102-76 triumph against Tulane on Feb. 20, 2019.

All 12 of Cisse’s points and six of his rebounds came in the second half. Lomax and Williams each had nine points in the second 20 minutes.

Memphis ended the game holding Wichita State to just 29.4 percent shooting from the field (20-68), a season low by a Tigers opponent.

The Tigers hit the road Sunday for a 3 p.m. CT contest at East Carolina on ESPN2.
The game against East Carolina begins a tough stretch of games for the Tigers, who will play five games in 11 days through Feb. 3. After the East Carolina game, Memphis plays five of its next six games at home starting next Tuesday, Jan. 26, against SMU at 6 p.m. on ESPNU.

o   It was Memphis’ seventh different starting lineup in 12 games this season.

o   Hardaway made his second start of the year and first since Dec. 8 against Mississippi Valley State.

o   D.J. Jeffries came off the bench for the first time this season.

o   The 25 against Mississippi Valley State came on 37 field goals.

-       Moussa Cisse recorded his third double-double of the season with 12 points and 10 rebounds.

o   It was his first double-double since Dec. 8 against Mississippi Valley State (14 pts, 13 rebs).

o   Cisse had four rebounds and two blocked shots in the first nine minutes of the game after having two boards and no blocks in the entire game at Tulsa Sunday afternoon.

o   He has now led the Tigers in scoring a team-high five times this season and in two-straight games.

-       Alex Lomax’s 12 points were a season high and one more than his last three games combined.

o   His previous season high was 10 points against Auburn on Dec. 12, right before scoring four, five, and two points in his last three outings.

o   Lomax added six assists, his most since having 11 against Mississippi Valley State on Dec. 8, and committed just two turnovers.