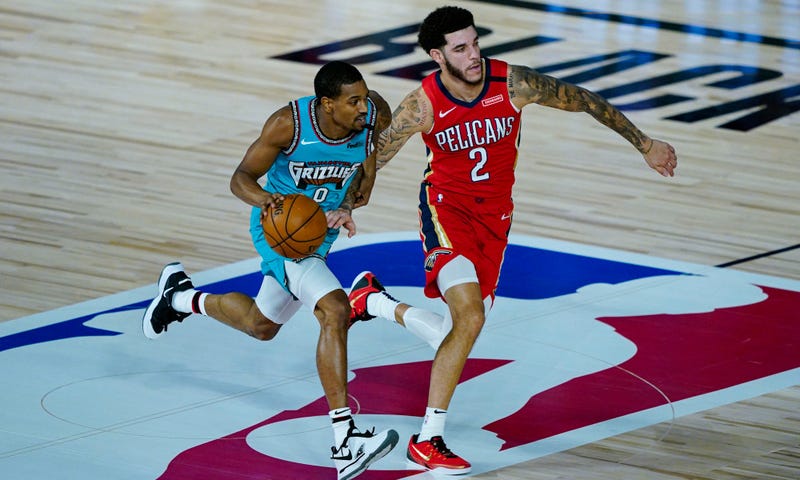 LAKE BUENA VISTA, Fla. (AP) — Brandon Ingram scored 24 points and the New Orleans Pelicans got a much-needed 109-99 victory over the Memphis Grizzlies on Monday despite another Zion Williamson shoe incident.

Williamson had 23 points, seven rebounds and tied a career high with five assists in his most extensive playing time since returning to the NBA bubble.

Williamson drove the lane in the third quarter and landed awkwardly, losing his left shoe. However, the big man quickly put the shoe back on and remained in the game. It brought back memories of when the then-Duke freshman sensation injured his knee in February 2019 when his foot ripped through the side of his shoe as he attempted to plant his foot.

After being limited to a combined 29 minutes in his first two games since the restart, Williamson played 25 minutes, although he appeared to get fatigued when he didn't hustle back on defense and was taken out with 6 minutes to play. But he returned a short time later and helped the Pelicans close on a 12-6 run.

Jaren Jackson Jr. had 22 points for the Grizzlies, who fell to 0-3 since the NBA restart. Ja Morant struggled from the field, finishing with 11 points on 5-of-21 shooting.

Lonzo Ball had called it a “must-win game" after the Pelicans lost their first two games since the restart, dropping them to 11th place in the Western Conference standings.

Grizzlies: Morant took a knee to the groin as he attempted to defend Ball, who was elevating as he drove to the basket. Morant remained in the game after spending about a minute on the floor. ... Grayson Allen had another impressive night with 17 points off the bench on five 3-pointers.