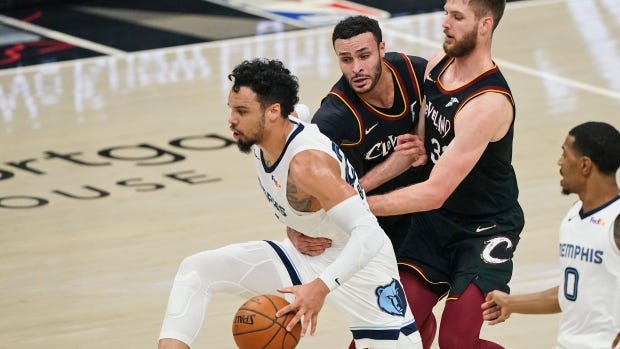 Brandon Clarke scored 15 points and Tyus Jones had 13 points, seven assists and three steals for the Grizzlies, who won their second straight and improved to 3-1 on the road.

Cavaliers center Andre Drummond had 19 points and 14 rebounds for his 11th straight double-double to start the season. Dotson added 14 points and six assists, and Cedi Osman had 14 points.

Point guard Collin Sexton warmed up and was expected to start but was a late scratch for Cleveland with a sprained left ankle. The third-year pro, who is averaging a team-high 25.1 points, missed his third game in a row.
Cleveland returned to Rocket Mortgage FieldHouse after its longest road trip of the season, covering six games and 10 days. The Cavaliers beat the Grizzlies 94-90 four days earlier.

The Grizzlies took their largest lead at 73-57 on Desmond Bane’s uncontested layup. The 26-11 run to open the second half was highlighted by an alley-oop from Jones to Clarke.

Kyle Anderson collected four points, five rebounds and six assists in the first half as Memphis took a 47-46 advantage into the break. The Cavaliers led 27-24 after one quarter with Larry Nance Jr. posting 10 points and four rebounds.

The Ohio Department of Health permitted 1,944 fans inside the arena, which is 10% of capacity. Cleveland had been limited to 300 spectators due to COVID-19 restrictions.

TIP-INS
Grizzlies: G Ja Morant (left ankle sprain) missed his seventh straight game after being injured on Dec. 28 at Brooklyn. The reigning Rookie of the Year is expected to return in late January. … F Jaren Jackson Jr. (left knee surgery) and F Justise Winslow (left hip displacement) have not appeared in a game this season.

UP NEXT
Grizzlies: Visit Minnesota on Wednesday. The teams will also play Friday at Target Center.

Cavaliers: Host Utah on Tuesday. Cleveland wraps up a stretch of five games in seven days.