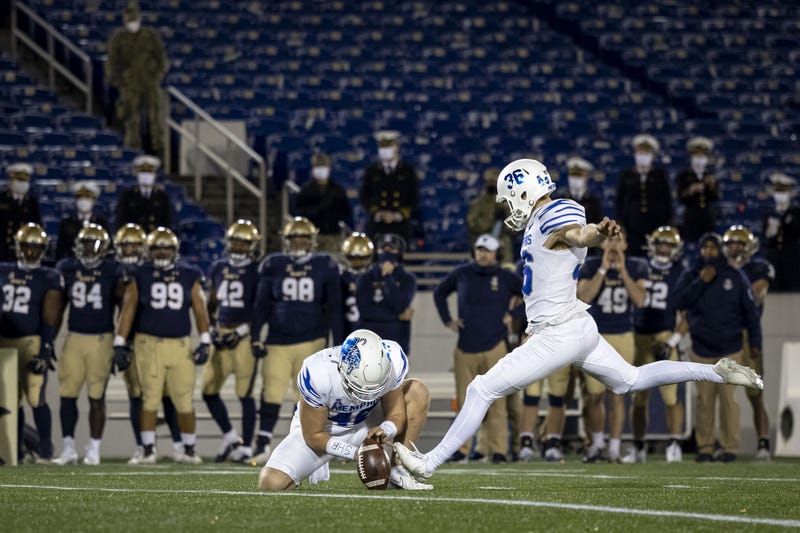 ANNAPOLIS, Md. — (COURTESY UNIVERSITY OF MEMPHIS/ATHLETICS) Memphis overcame a deficit to win for the fifth time this season as the Tigers topped Navy 10-7 at Navy-Marine Corps Memorial Stadium on Saturday night.

Memphis (6-2, 4-2 American Athletic Conference) trailed 7-0 before tying the game on a 14-yard touchdown from Brady White to Calvin Austin III with 3:52 remaining the opening quarter.

The game remained deadlocked until placekicker Riley Patterson connected on a 26-yard field goal with 10:53 left in the fourth quarter.

Memphis' defense came up with several big plays in clutch situations. The Tigers held the Midshipmen (3-5, 3-3) to just 2 of 13 on third down and denied Navy twice on fourth-down attempts.One of the biggest plays of the game came from redshirt freshman linebacker Cole Mashburn when he recovered a fumble on the first play of the fourth quarter to set up Patterson's game-deciding field goal. Mashburn had a career-high nine tackles.

"Tonight, great job by the defense," said Memphis head coach Ryan Silverfield. "I am really proud of them, they played a complete game, forced two turnovers and did what it took. Obviously, they carried this team today."

Another win in November

Memphis will travel to New Orleans next week to face Tulane at 11 a.m. Saturday on ESPN+ from Yulman Stadium. Memphis and Tulane were initially set to play Nov. 28, but several postponements forced a reshuffle of the AAC schedule.

The Tigers hold a 23-12-1 advantage in the all-time series against the Green Wave, including victories in 12 of the last 13 matchups. Memphis defeated Tulane 47-17 last season at the Liberty Bowl. The Green Wave won 40-24 in 2018, the last time the teams met in New Orleans.