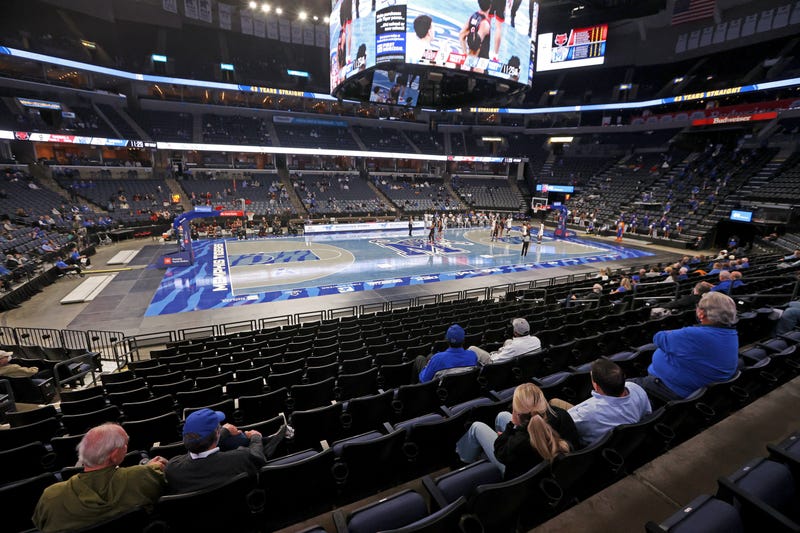 (USA Today/Imagn/CA/Joe Rondone photo); A limited number of fans, socially distanced watch from the stands as the Memphis Tigers took on the Arkansas State Red Wolves during the home opener where 20 percent capacity was allowed at the FedExForum on Wednesday, Dec. 2, 2020

Despite shooting just 23.1% from the 3-point arc, Memphis used an interior game making 42.9% of all their field goal attempts scoring 83 points while holding Arkansas State to 33% from the arc and from the field.

This was a "get right" game for the Memphis Tigers, a roster loaded with possible future NBA players like RJ Hampton and Moussa Cisse that just returned from South Dakota with a 1-2 record. Now 2-2 on the season Memphis was led Wednesday night by Landers Nolley II who came off the bench with a game high 23 points. Alex Lomax was also replaced in the starting lineup, a noticeable change from the Dakota trip. In his place Damion Baugh had 6 points and 4 rebounds. Boogie Ellis started in this one, as well, along with Lester Quinones who had a double-double 15 points and 10 rebounds. Moussa Cisse, the freshman NBA prospect from Lausanne, was the second Tigers double-double with 14 points and 10 rebounds.

Next up: Memphis takes on Central Arkansas this Friday (12/4) at FedExForum at 7PM broadcast on ESPN+

MEMPHIS – The Memphis Tigers remained undefeated in home openers at FedExForum with an 83-54 victory over Arkansas State on Wednesday night.

The 54 points were the fewest the Tigers have allowed in a game this season. They held Arkansas State to just 33 percent from the field (17-52) and forced 18 turnovers.

“This was definitely something that we needed,” said Memphis head coach Penny Hardaway. “Overall, I’m proud of how hard the guys played.”

Memphis has now won every home opener since 2002, two years before FedExForum became their home venue.

Nolley II shines off the bench

The move did not phase Nolley II, as the sophomore guard scored a game-high 23 points. It was only the fourth time he has come off the bench in 36 career games. He started 29 of 32 games at Virginia Tech as a freshman. It’s the second game this season of at least 20 points for Nolley II, who scored 25 against Western Kentucky last week.

“Landers is a guy that scored 15.5 points per game in the ACC,” Hardaway said. “That’s not easy to do when you’re playing Florida State, Duke, North Carolina and all those really good teams. If you can average that, it shows you can really put the ball in the basket. As far as scoring and shooting, he can do that with the best of them.”

The adjustments also produced a more balanced attack offensively as eight players scored at least four points and the Tigers had a season-high 21 assists.

Memphis dominated in the paint, outscoring Arkansas State 44-22. The Tigers also outrebounded the Red Wolves 49-32 and had an 8-3 advantage in blocked shots.

Freshman center Moussa Cisse was key to commanding the action around the rim. He had 14 points and 10 rebounds in 19 minutes as he notched the first double-double of his career.

“If he can get those type of numbers in those minutes, that’s major numbers for us,” Hardaway said. “He’s doing a lot of stuff out there and we’re proud of him. He’s a very mature kid that’s going to give us his energy and his defense until he catches up offensively. His progression is a beautiful thing to watch going forward.”

“I gave myself a goal of going in and getting 10 rebounds tonight,” Quinones said. “I felt like I needed to be relentless on the glass and I was locked in on doing that for my team.”

Memphis is back at FedExForum on Friday for a 7 p.m. matchup with Central Arkansas in what will be the Bears’ first game of the season. A limited number of single-game tickets are available at www.GoTigersGoTix.com.