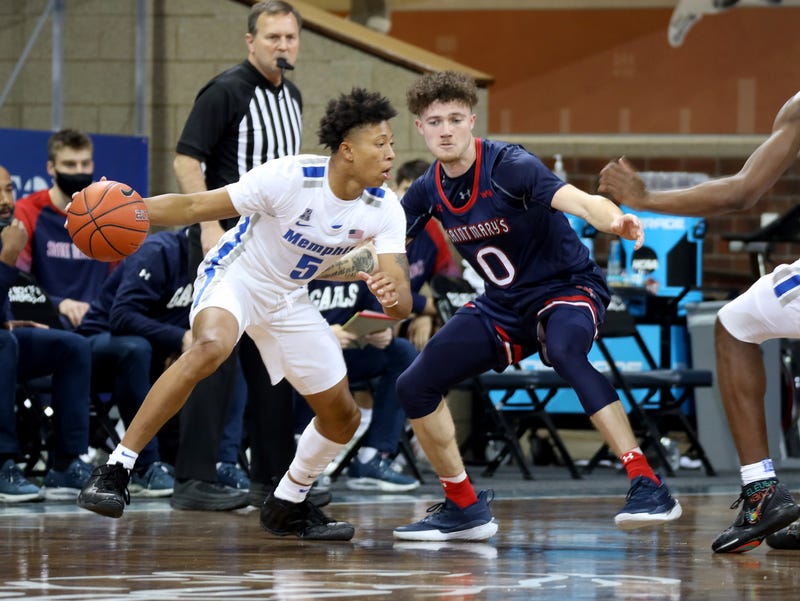 After tweeting "pain", likely due to not starting, Boogie Ellis channeled his energy on the court and led the Memphis Tigers to a 73 to 56 win in the team's season debut in South Dakota in the Bad Boy Mowers Crossover Classic against Saint Mary's. Ellis led all scorers with 24 points along with 2 rebounds, 2 assists, and 1 steal.

Moussa Cisse impressed in his Memphis Tigers debut with 10 points, 7 rebounds, and 2 blocks. Tigers newcomer transfer (via Virginia Tech) Landers Nolley scored 11 points (5/12 FG). Damion Baugh had a solid game off the bench with 10 points and 5 rebounds. DJ Jeffries struggled with his shooting (2/10 FG) scoring 4 points while having a nice day on the glass with 9 rebounds.

SIOUX FALLS, S.D. – Boogie Ellis led all scorers with a career-high 24 points, including 20 in the first half, to lead Memphis to an impressive 73-56 win over Saint Mary’s in the opening game of the Bad Boy Mowers Crossover Classic at the Sanford Pentagon in the season opener for both teams. Ellis made a career-high-tying six 3-pointers.

Ellis, whose previous career-high was 22 points vs. UIC in the second game of last season, scored nearly half of the Tigers’ first half points as Memphis led 43-26 at intermission. In the opening half, Ellis made all but one of his eight shots, including a perfect 5-of-5 from 3-point range that featured a steal and half-court shot just before the halftime buzzer.

The half-court buzzer beater came seconds after a Damion Baugh steal and assist to Lester Quinones for a dunk.

After Saint Mary’s scored the game’s first eight points, Memphis outscored the Gaels 43-18 the rest of the half. Memphis, which missed its first six shots from the field, didn’t score until Ellis split a pair of free throws just under four minutes in. The Tigers didn’t make a field goal until Ellis’ bucket at the 15:25 mark.

Ellis scored the Tigers’ first six points of the game. With Memphis trailing 14-8, the Tigers went on an 18-2 run to go up 26-16. Freshman Moussa Cisse’s put-back gave the Tigers their first lead at 15-14 with 10:26 left. The Tigers’ defense forced the Gaels to miss 16-of-17 shots during the decisive run.

Ellis finished the game shooting 8-of-13 from the floor, including 6-of-7 from 3-point range. His only miss from behind the arc came with 50 seconds to play.

“Coming into the game I just embraced my role and Coach was telling me great players impact the game no matter if they are starting or coming off the bench,” said Ellis. “It didn’t really affect me. I just wanted to play basketball.”

Cisse’s layup to open the second half gave Memphis its largest lead at 45-26, but a 20-11 Saint Mary’s run closed the Gaels to within 56-46 with eight minutes to play. That was as close as Saint Mary’s would get.

“Boogie is a competitor,” said Hardaway. “I don’t think he has ever come off the bench in his life. I know the role that he is going to star in, and I was pretty sure he was going to do what he did today. I told him this morning at breakfast that if he didn’t get 15 points, I was going to be highly upset.

“He definitely surpassed that because he can score the ball. He got 24. He’s adapting. He embraced it, came into the game and ended up finishing the game.”

“Just like Coach Penny said, Moussa had 10 and 7,” said Baugh. “That’s his first game, and that is big. He played great on the offensive and defensive end.”

The Tigers enjoyed a 42-9 advantage in bench points and had a 17-0 edge in points off turnovers before finishing with a 17-10 edge.

Memphis will play in the semifinals of the Bad Boy Mowers Crossover Classic against the Western Kentucky-Northern Iowa winner on Thanksgiving at 11 a.m. CT on ESPN. The Tigers will play in Friday’s final round either in the championship game at 12:30 p.m. on ESPN or the third-place game at 8 p.m. on ESPN2.