Rodgers' speech, which was prerecorded and aired on NFL Network during the league's annual NFL Honors awards show earlier this month, first turned heads because he revealed for the first time that he'd gotten engaged sometime last year -- though he didn't say to whom.

Actor Shailene Woodley was later revealed as Rodgers' bride-to-be, but the mystery of the Foster shoutout persisted -- until this week. 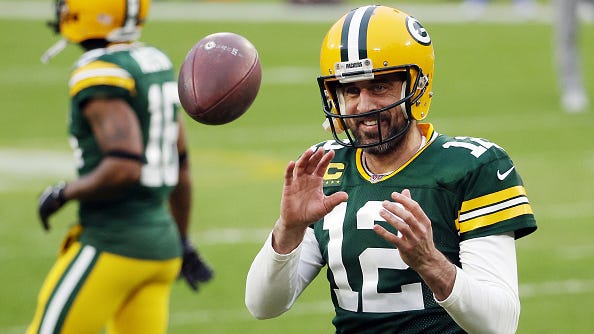 Foster, perhaps best known for her early-career turn as FBI agent Clarice Starling in the classic 1991 psychological horror flick "The Silence of the Lambs," confirmed during an appearance on Jimmy Kimmel Live! this week that she was, in fact, the Jodie Foster to whom Rodgers seemed to be referring in his speech.

Foster said she relished Rodgers' remark that he was part of her "off-field" team, even though the two have never met.

“You see, he said ‘my team,’ even though he said ‘off the field," Foster said. "That makes me a Green Bay Packer. People keep saying to me, ‘No, Jodie, that does not mean you’re part of the team.’ But it does mean I’m part of the team!"

Foster, as it turns out, has become a big Packers fan since she was introduced to the team by a friend, she told Conan O'Brien during an appearance on his show in 2016, according to Ryan Dunleavy of the New York Post.

Oddly enough, Foster is starring alongside Woodley in her new movie, "The Mauritanian," though she told Kimmel it was just a coincidence.

“She’s fantastic,” Foster said of Woodley. “So we spent a lot of time on ‘The Mauritanian’ together in a little tent with a little air-conditioning spitting at us, talking about our lives, and recipes, and people we hate, and things like that."

"And the Green Bay Packers somehow came up!" Foster responded.