In an interview this week with Cardinals broadcaster Polo Ascencio on La Vida Baseball (@LaVidaBaseball) Yadier Molina made some news with the following statement:

“If God wants me to come back, then I’ll come back. And if not, I will retire happy with my head held high.”

Now, this isn't something I'd recommend overreacting to. This offseason has been frustrating for all free agents who remain unsigned and a lot of players are signing for a lot less than they thought they would. That's not a trend I expect will change this month and if someone like Molina, who has had a Hall of Fame career, doesn't see a deal that provides the kind of value he thinks is necessary for him to continue to play then he could definitely ride off into the sunset. 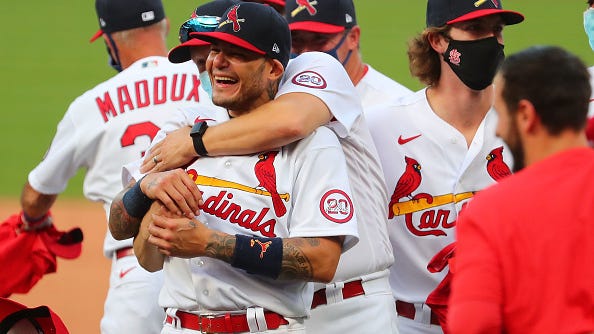 Yadier Molina still preparing for 2021, but hints at possibility of retiring

Here's the thing...right now none of us know what is out there for Molina. We can logically assume that his situation is tied to that of J.T. Realmuto, the best catcher in the game at the moment, and that once Realmuto has made a decision there could be some opportunities that open up for a guy like Molina.

So, which teams might make sense for Molina once we have resolution on Realmuto?

Cardinals
The fit is obvious and doesn't require a whole bunch of analysis. If Molina thinks a Cardinals' offer values him properly it's safe to assume he'll be back. It's his team. He brings together the two elements that the Cardinals will likely rely on to win games in 2021 - pitching and defense. If he returns he will likely continue to hold sway when it comes to playing time as well, a luxury that might not exist somewhere else.

A return to the Cardinals still seems like the most likely outcome.

Phillies
This only makes sense if the Phillies lose out on Realmuto, obviously, but if they do they'll need a full time catcher. They plan on being a competitive team but they're in a deep division and might end up being the 4th or 5th best team there come July. Of course, if things go well they could be near the top as well. The situation is not unlike the Cardinals' situation except that the Phillies are in a really tough division with three other teams spending money and making deals to get better. The NL Central teams are, uh, not doing that.

It's a big market, they can be good and if they lose out on Realmuto they might have the most cash to offer. So I'd say they're a real threat if Molina is willing to leave.

Marlins
They really need catching help and they'd like to build off of their success last season but let's be honest, as fun as 2020 was for them they're no better than the 4th most talented team in the division and may be 5th. They don't exactly have piles of money to toss around either. It would be a bit of a risky move to jump to the Fish if contention and money matter.

Can't rule it out though, South Florida is a nice place to live and there are no state income taxes either. He wouldn't even have to change Spring Training plans.

Nationals
The Nats are looking for catching help and they should be a competitive team but how much does this fit for Molina? Well, that depends on how much Molina wants to play. If he wants to be an "everyday" catcher that may not happen in D.C. They have Yan Gomes, who is going to make $6 million in 2021, and I seriously doubt they're going to pay him that much money to play once every 7-10 days. Gomes has split catching duties pretty much 50-50 with Kurt Suzuki the last two seasons and he's done well so it's hard to see them pushing him aside.

Seems like an odd fit unless Molina is willing to take less playing time, something he hasn't shown an interest in with the Cardinals.

Yankees
They've been unhappy with the defense of Gary Sanchez for some time but he's still there and still in-line to be their starting catcher. Where he lacks in defense Sanchez excels in delivering power. He stunk at the plate in 2020 but he's a legit 30-35 HR threat and there's nobody else at this position in MLB that brings the power he does. The Yankees have the kind of lineup that could keep on trucking just fine if they ship out Sanchez and replace him with Molina but do they want to? DH isn't much of an option for Sanchez (that's Giancarlo Stanton's spot and they have Aaron Judge, Aaron Hicks and Clint Frazier in the OF) so it's hard to see Sanchez and Molina on the same team unless both are okay with splitting time.

Honestly, this only works if the Yankees want to move on from Sanchez and after some early rumblings this offseason it's been awfully quiet on that front since.

Angels
This one could actually make some sense. Not only is close friend Albert Pujols still there but they need catching help. Max Stassi was the team's best catcher last year and he hit really well (very small sample size of 31 games) but let's keep it real. Stassi is entering his age 30 season and he's played a total of 214 Major League games. You're not turning down Molina to save playing time for Stassi, IMO. Plus, Stassi is recovering from a torn labrum in his hip and may not be healthy at the start of the season. So...there's an opportunity here. But are the Angels a contender? They sure haven't been recently so they'd probably need to make a big pitching move (Trevor Bauer?) to convince Molina they have a chance. The A's and Astros have both taken steps back since last season, though there is obviously time for them to make some moves, so MAYBE the Angels have a chance. Hey, I said "maybe." LOL. It figures ... just after publishing, the Angels have signed catcher Kurt Suzuki to a 1-year deal worth $1.5 million.

And that's about it. There were other teams mentioned earlier in the offseason like the Mets (James McCann), Padres (Austin Nola and Victor Caratini) and Rays (re-signed Mike Zunino and trades for Francisco Mejia) but they seem to be all good.

It seems like the Phillies and Angels would be the biggest threats - depending on where Realmuto ends up - but it still seems like the most logical destination for Yadi is where he's been all along.