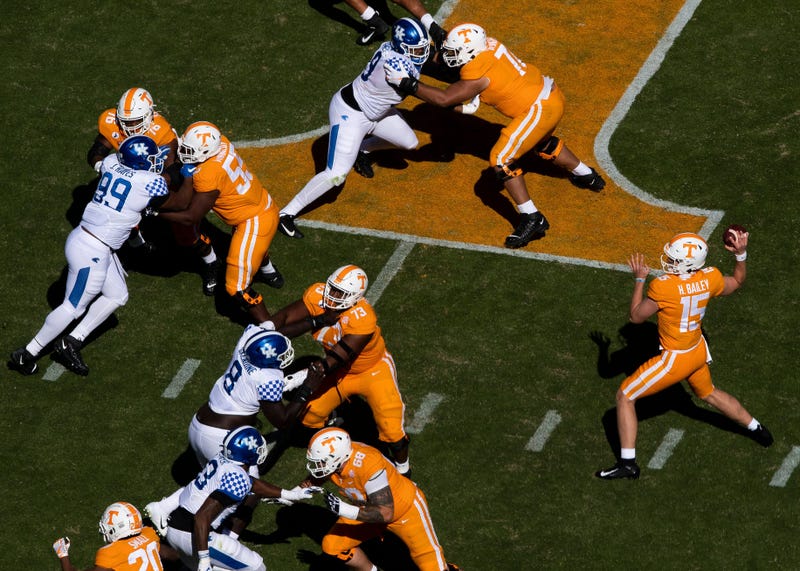 A week after getting a harsh douse of reality against elite competition, No. 13 Miami and No. 18 Tennessee had a chance to brush themselves off and get back on track to hopeful seasons.

The Hurricanes took a step forward, taking care of business against Pittsburgh at home.

The Volunteers took a step back, getting drubbed at home by a Kentucky team that had not won at Neyland Stadium since 1984.

Nobody is handing out trophies for beating Pitt or Kentucky — does Miami's turnover chain count? — but for two programs with championship pedigree and mostly mediocre results for about two decades this is how progress should be measured.

But before Miami can challenge Clemson it needs to finally separate from the ACC's second tier. The likes of Pitt, Virginia, Georgia Tech and Duke have too often taken down the 'Canes and their blue-chip recruits.

It was no surprise Miami couldn't keep up at Clemson last week.

The Hurricanes are less than a year removed from being shut out by Louisiana Tech in a bowl game. Manny Diaz's first season as head coach was a dud, but credit for making some quick changes. The Hurricanes have looked like a different team offensively with quarterback D’Eriq King running Rhett Lashlee’s spread offense.

Against a Pitt team playing without its starting quarterback, the Hurricanes struggled to sustain offense against a tough defensive front but busted enough big plays to win without sweating it at the end.

There is a path to a strong season for Miami that would include getting to the regular-season finale against No. 5 North Carolina with a chance to earn an ACC title game rematch against Clemson.

Miami has made one ACC championship since joining in 2004. Simply making it two would be a huge boost for Diaz, who currently has the No. 12 recruiting class in the country lined up for 2021.

Tennessee has been stuck in a similar rut as Miami. Probably worse. Playing in the SEC gives the Volunteers a rougher road back to contending for division titles with Georgia and Florida. And an annual rivalry game against Alabama is not something a rebuilding program needs.

The Volunteers rode an eight-game winning streak under coach Jeremy Pruitt into last week's game at Georgia. They hung around for a half and then got buried. Kentucky picked up where the Bulldogs left off.

This isn't your grandfather's Kentucky football. Coach Mark Stoops has built winner, strong along both lines. But while Kentucky aspires to break long streaks of futility — the Wildcats won in Knoxville for the first time since 1984 — Tennessee wants to win SEC titles.

Pruitt got a contract extension right before the start of the season and in many ways the Tennessee roster looks better than it has in a while. This rebuild feels different than Butch Jones'. Still, Pruitt, the former Alabama assistant, is now 15-14 with the Vols. Jones was 14-15 in his first 29 games.

And Tennessee gets Alabama next week.

AROUND THE COUNTRY: No rivalry in the last few years has produced wilder games than UCF-Memphis. The Tigers finally came out on top, snapping a 13-game losing streak to the Knights that dates back to the Conference USA days. The last four meetings have crazy. Including two American Athletic Conference championship games, Memphis and UCF have combined for an average score for 50-44. On Saturday, UCF's Dillon Gabriel became the first FBS quarterback to pass for more 600 yards and five touchdowns and lose since Pat Mahomes did it for Texas Tech against Baker Mayfield and Oklahoma in 2016 ... No offseason hire drew more skepticism than Arkansas making veteran offensive line coach Sam Pittman a first-time head coach. The Razorbacks appeared to be in need of a long rebuild just to get to respectable, but they are 2-2 under Pittman after beating Ole Miss and could have another victory against Auburn if not for a missed call last week. ... Auburn was not so fortunate this week, losing to South Carolina. Tigers quarterback Bo Nix does not look as like a former five-star recruit on path to become a star. He looks sophomore who hasn't improved much after being an inconsistent freshman. ... No. 1 Clemson's M.O. in recent years has been to take about four or five games to really hit their stride and start laying waste to the ACC. The Tigers appear to be in full Darth Star mode earlier than usual and Georgia Tech never had a chance. ... Speaking of the value of beating the teams you're supposed to beat: Notre Dame has won 22 straight home games and the key to the streak is not letting games like Saturday's slog against Louisville get away ... No. 14 BYU stayed unbeaten Friday night against Houston. The Cougars don't have enough big-stage games to make a real playoff run, but quarterback Zach Wilson is a good bet to be a Heisman Trophy finalist But it's probably Trevor Lawrence's Heisman to lose ... Mississippi State's offense broke an eight-quarter scoreless streak against No. 11 Texas A&M. Still, lost. And Bulldogs star running back Kylin Hill did not even attend the game. That upset of LSU in Mike Leach's Mississippi State debut feels like it happened in March ... Coast Carolina should be ranked when the new AP Top 25 comes out Sunday.