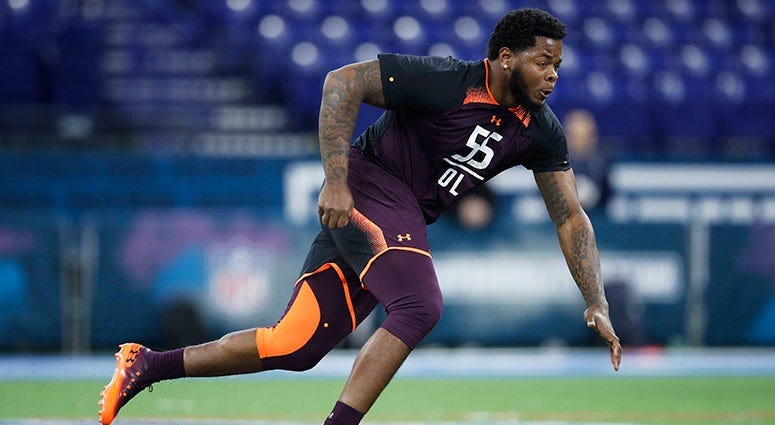 Background...A teammate of current Florida defensive back Chauncey Gardner-Johnson at Cocoa High School, Taylor was his own worst enemy in his battle of the bulge. Despite being a Florida Class 4A first-team All-State pick as a senior and leading his team to a 10-3 record, as they reached the Class 4A State Semifinals, recruits were worried that his health could be affected.

Tipping the scales at over 380 pounds when he hit the recruiting trails, Taylor first committed to the University of Miami, but later enrolled at Florida. Soon down to 347 pounds by the end of 2016 fall camp, Taylor went on to started all but one of thirteen games at right tackle that year, becoming the only freshman lineman to start a game for the Gators that year.

Taylor would garner Freshman All-American honors by ESPN.com, FWAA and Pro Football Focus. He was also selected to the Southeastern Conference's All-Freshman team by the league's coaches. He participated in 819 total snaps, including 412 pass plays, allowing six sacks, fourteen quarter-back pressures and three QB hits while being penalized five times.

Due to early season weather issues forcing a game cancellation, Taylor appeared in eleven contests in 2017. He started the first nine games at right tackle before shifting to the left side for the final two games on the schedule. Florida suffered through a losing campaign, missing the bowl season, as their front wall allowed 37 sacks, 73.0 tackles behind the line of scrimmage and 44 pressures. In 716 plays, 336 for the ground game, Taylor was penalized five times, yielding three sacks, two quarter-back hits and fifteen pressures.

Despite the scouts love for Taylor in 2018, it was a penalty-plagued season for the now 328-pound right tackle, as the second team All-SEC pick and conference Academic Honor Roll student was flagged twelve times. Yet, he allowed just one of the eighteen sacks given up by the Gator front wall, a figure that placed Florida third in the league and 20th in the nation. He was also charged with eight pressures, but no Gators quarterback was hit behind Taylor's blocking that consisted of 805 snaps for the season.