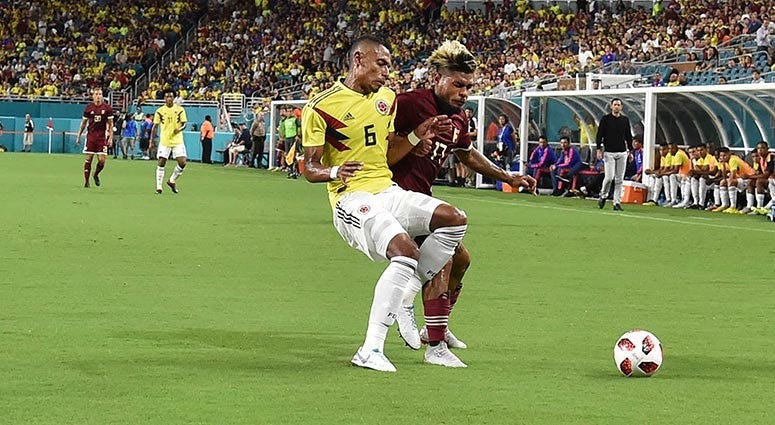 Atlanta United has the weekend off, but the Starting Eleven rolls on. Here’s eleven important things to know as we head into a weekend of international action...

Facing an opponent who sat deep to frustrate them, it took the U.S. squad until the 81st minute to break through. It also took a deflection to help Gyasi Zardes’ shot past goalkeeper Alexander Dominguez. The one goal was enough for the U.S. to claim the win in last night’s exhibition in Orlando.

Gregg Berhalter has established a plan of action with this group. He had to do large portions of it using technology while the players are away at their clubs, but the work has paid off. There are still rough edges to it, the squad only really had two days to work together ahead of the match, but it is a good starting point. Controlling possession and creating overloads is the name of the game, but against teams that sit as deep as Ecuador did, it also takes speeding up the pace of play and not making mistakes.

3. Who improved their role with the squad going forward?

Wil Trapp was one of the biggest winners on the night as he earned the start over Michael Bradley and made the most of it. His long range passing in the first half opened up the Ecuador defense on multiple occasions. There are still questions about Trapp’s performance against teams that will test him more defensively, but in a match like this, he is a standout. Aaron Long continued to show that he in an international-caliber center back. Tyler Adams did well in his hybrid role at right back/central midfield. It improved as the night went on, which is what you are looking for in matches like this.

4. One more for the U.S. during this international break

Tuesday night, the U.S. squad heads to Houston to face Chile at BBVA Compass Stadium. Chile is in action tonight against Mexico at SDCCU Stadium in San Diego. There are currently no friendlies scheduled ahead of the Concacaf Gold Cup this summer, which will likely change soon. The tournament starts on June 18 for the U.S. at Allianz Field in St. Paul, Minnesota. After the last World Cup qualifying campaign, this tournament will be the first competitive matches the U.S. will play since November 2017.

Josef Martínez and Pity Martínez are expected to face off this afternoon at the Wanda Metropolitano in Madrid as Venezuela plays Argentina. La Albiceleste (Argentina’s national team nickname due to their jerseys with white and sky blue stripes) then heads to Tangier to face Morocco on Tuesday. Tito Villalba has two matches during the break with Paraguay, starting tonight against Peru at Red Bull Arena before heading to Santa Clara’s Levi’s Stadium to face old boss Tata Martino’s Mexico. Miles Robinson is expected to make his debut for the U.S. U23’s during their pre-Olympics qualifying camp in Spain. They play Egypt this afternoon and the Netherlands on Sunday afternoon. Andrew Carleton is part of the final U.S. U20 team camp ahead of the upcoming World Cup, he will have opportunities to test himself against France this morning and Japan on Monday. Ezequiel Barco came off the bench in Argentina’s U20 loss to France on Wednesday, he’ll have another chance to play on Saturday against Japan. Atlanta United 2 defender Wesly Decas was also called into Honduras’ U20 squad where he is competing to earn a spot on their World Cup roster.

6. Will Pity play?
Reports out of Argentina said that Pity will start today against Venezuela, replacing the injured Ángel di María. Lionel Scaloni is expected to play a version of the 3-4-3 with Pity and Lautaro Martínez flanking Lionel Messi. Argentina outlets have reported on comments from Pity during his time with the national team, discussing the difficulties of his move to Atlanta and his ultimate desire to play in Europe. Atlanta United was the only one willing to match River Plate’s asking price, strong performances with Argentina and stronger performances in MLS could make European clubs wish they had not waited.   7. 2’s heading to Charlotte

With the first team off this weekend, the Atlanta United 2 match should be interesting to see if any first team players returning from injury get playing time. Previous discussions of Franco Escobar’s journey back included the potential for time in the USL Championship to build up fitness. George Bello’s return could start with ATL UTD 2 as well.

In addition to those possibilities, the academy players who have had opportunities thus far have looked ready for the level of competition. George Campbell has started both USL Championship matches at center back and has earned one Man of the Match performance. Central midfielder Will Vint has impressed with his range of passing and confidence. Young players on USL contracts like forward Jackson Conway and left back Guillermo Benítez have stood out as well.

The match against the Charlotte Independence will kickoff just after 7:00 p.m. and you can watch on ESPN+.

Only five matches are on the MLS schedule for this weekend due to the international break. Hopefully in the near future, no teams play during these international breaks in the schedule. Atlanta fans will likely be keeping an eye on the Philadelphia vs. Columbus match at 7:30 p.m. on Saturday. The Crew will be missing four potential starters with Wil Trapp and Gyasi Zardes with the USMNT, Justin Meram with Iraq, and Waylon Francis with Costa Rica. Caleb Porter will get a chance to test his depth in a competitive situation. New England hosts Cincinnati on Sunday at 4:00 p.m. in another interesting Eastern Conference match.

Albert Rusnak of Real Salt Lake had a goal and an assist for Slovakia in their European Championships’ qualifier yesterday against Hungary. His performance was biggest highlight so far during the international break that will see 80 MLS players represent 32 different countries. The U.S. called up 15 MLS players, with 10 players on the roster developing in MLS academies.

10. Other international matches of note

A depleted England squad opens European Championships’ qualifying this afternoon against the Czech Republic. Injuries will make things difficult for manager Gareth Southgate. Tata Martino makes his Mexico debut tonight against Chile before seeing old friends Miguel Almiron, Tito Villalba, and Paraguay on Tuesday. The high-profile match during the window is a European Championships’ qualifier on Sunday afternoon pitting long-time rivals Germany and the Netherlands against one another.

In addition to preparations on the men’s side for the Gold Cup, the U20 World Cup, and qualifying for Olympics for the U23’s, the U.S. women’s squad will be attempting to defend their World Cup title this summer in France. After watching England win the SheBelieves Cup, the U.S. will try to bounce back with two friendlies in April against Australia and Chile. The roster was announced for the matches and the biggest surprise was the lack of Morgan Brian’s inclusion. The St. Simons native was a huge part of the World Cup win, but a combination of injuries and loss of form make it appear like her return to the squad for this summer’s World Cup is unlikely. Fayetteville’s Kelley O’Hara is returning from injury and is not ready to return for these matches.