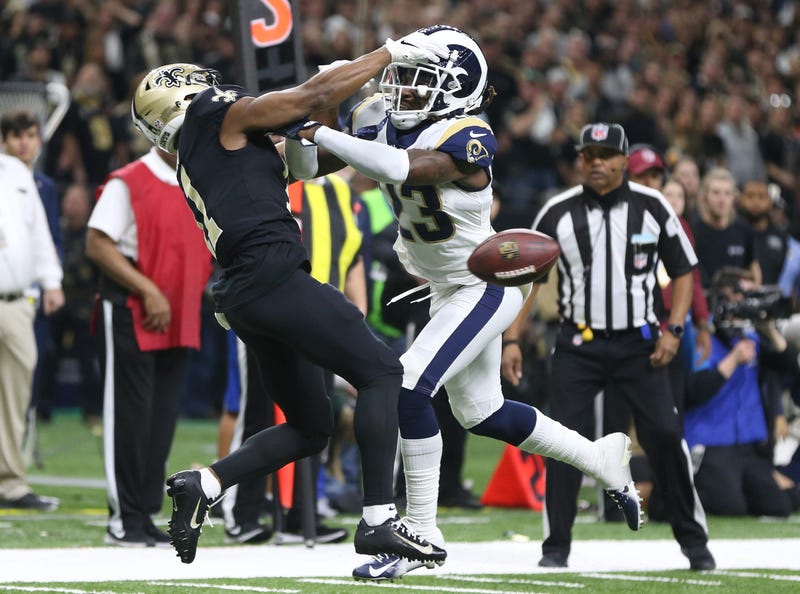 January 25, 2019 01/25/2019 3:58 pm
New Orleans Saints fans are still crying in their cereal after the referees missed, well, an egregious pass-interference call in the NFC Championship game.

Saint got robbed how was this not pass interference -- @NFLOfficiating you are the worst pic.twitter.com/Ny8kOfXIWj

The game ended up going to overtime where, by now, we all know the Los Angeles Rams won and advanced to Super Bowl 53 here in Atlanta.

Not only is Rich McKay the President and CEO of the Atlanta Falcons, he is also the Chairman of the NFL's competition committee. He joined John and Hugh on Friday and said this play will be discussed at the team's next meetings.

"It will not go by the wayside. It'll certainly get discussed," McKay said about the missed PI call.

"The way I look at it is nothing should be off the table; you should consider everything. At no time is the NFL rule book set for life...It's (a play) that merits discussion. It will be interesting to see what the ideas are."

One idea that's been floating around since last Sunday's NFC Championship game is to have all pass interference calls be reviewed. McKay said that brings on new challenges during gameplay.

"This replay system has served us--I would say well. I would say at times it's been challenging because it's a very complicated system and the more you add to it, the more complicated it becomes. It was there in the early days to correct the obvious error on the big play. And this is a big play and was an error that, when you watch it, most people would say occurred...There's no easy 'oh, we'll just do this' and not worry about the repercussions to the game. You're always going to worry about that."

Meanwhile, other non-Saints fans have been quick to point out missed PI calls made by the New Orleans secondary.

Saints complaining about 1 missed call for pass interference but don’t wanna talk about ANY OF THESE!! pic.twitter.com/HxQAxpkA4i

So no one is going to mention the push off & offensive pass interference on Michael Thomas? After all the penalty gifts given to Saints? pic.twitter.com/0rBJT9ejhJ