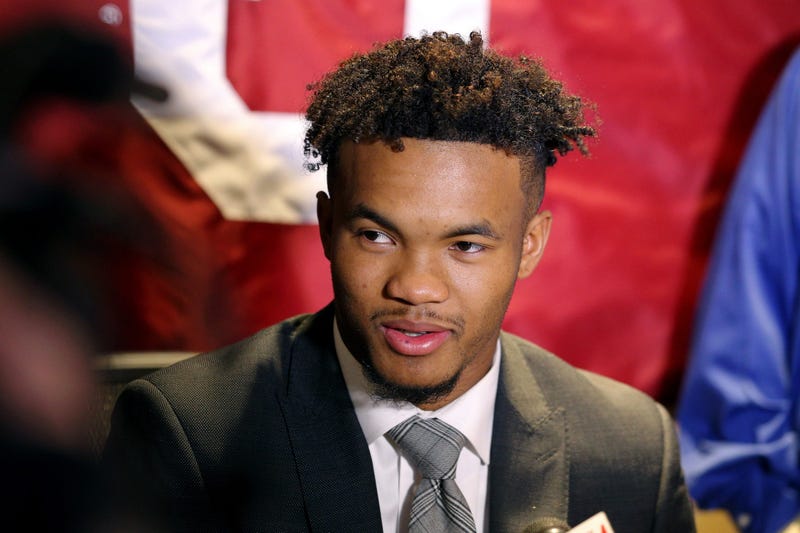 January 16, 2019 01/16/2019 3:59 pm
Oklahoma quarterback Kyler Murray officially declared for the NFL Draft on Monday posting this to his Twitter account.

I have declared for the NFL Draft.

The Oakland A's took Murray ninth overall in the 2018 MLB Draft that included a a $4.66 million signing bonus. Murray previously said he would report to spring training in 2019 to begin his professional baseball career.

Brian Jordan, who played both in Major League Baseball and in the NFL, joined John and Hugh on Wednesday and was asked if he thought Murray should consider playing both sports.

"The biggest obstacle for him is trying to get himself in the right situation," Jordan said. "The only way that he can do both, it has to be the perfect scenario."

New Arizona Cardinals head coach Kliff Kingsbury, prior to being named head coach, said he would draft Murray No. 1 overall if given the opportunity.

In October 2018, Kliff Kingsbury said he would take Kyler Murray as the first pick of the NFL draft if he could.There's a San Francisco Chronicle report that he's expected to declare and Kingsbury's @AZCardinals are first on the clock -- pic.twitter.com/ERF1lFz5qg

Jordan said if the Cardinals ended up drafting him, Murray has a real chance at being successful at playing both sports.

"To me, that's the perfect scenario for Kyler Murray to be able to play two sports. The Athletics spring training is in Arizona. You're football team's in Arizona. That allows him to be able to go out and play baseball in Spring Training--continue to work with his receivers, offensive coordinators in the offseason."

Seahawks quarterback Russell Wilson has also attempted a stint in MLB along with his NFL career but has only had appearances in a handful of minor league games. Wilson was drafted by the Colorado Rockies in the fourth round of the 2010 MLB draft.

While he encouraged Wilson to pursue both sports, Jordan said there's a big difference from being a third-round draft pick (Wilson) and a being a potential first-round pick (Murray). As a third rounder, you're having to prove yourself for a starting role. As a first-rounder, you have to maintain focus.

"It's going to be tough but I really think Kyler Murray has the talent to do it."