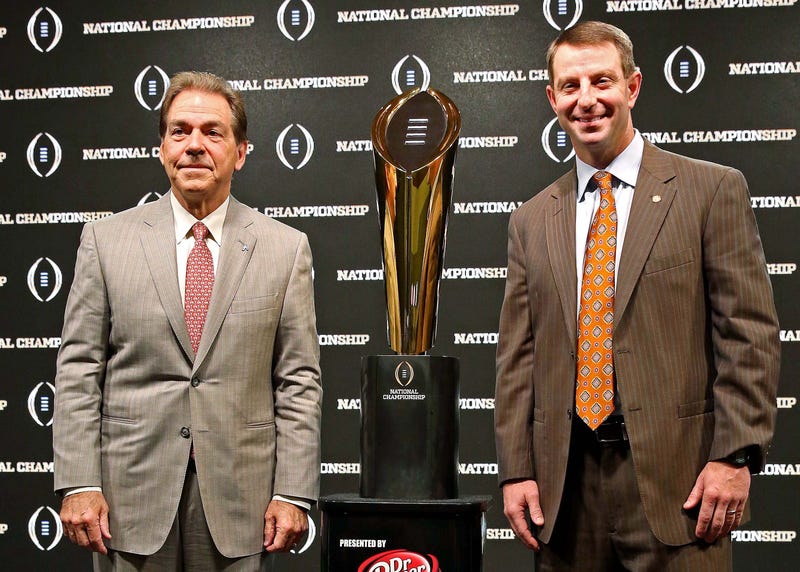 No. 1 Alabama will face No. 2 Clemson to see which team takes home the National Championship tonight at Levi Stadium. It'll be the fourth time these two teams will meet in the playoffs since the College Football Playoff inception back in 2014.

While Fox Sports national commentator Tim Brando believes the two best teams are playing tonight, he told John and Hugh on Monday that the committee continues to get it wrong when it comes to putting the four best teams in.

"You can use revision is history from the Bowl games all you want and say the committee got it right. That's garbage. That's total garbage. Notre Dame got in because of what--because of their brand. It's all about the brand."

The question has come up since year one about playoff expansion. One power conference team gets left out every season despite winning their conference Championship. Brando is one of those that would like to see the playoff expanded to eight.

"If we had eight teams in this year's college football playoff, it would've been incredible the match-ups...College football is missing out on engaged excitement throughout the back-half of November and in the playoff because it's limited. It's a country club, and if you're not one of the brand names, you're not invited.

Brando believes on of those four best teams should've been the Georgia Bulldogs. Hugh wonders if he thought differently after watching the Dawgs get run over by Texas in the Sugar Bowl.

"I was told that this committee was going to be fair-minded, open-minded and it hasn't been.Nebulus criteria--they hide behind it. There is zero transparency and all we're getting is the same talking point pablum that we always get."

"It tells you that if you're privileged; pure, playoff privileged programs, you're in. And I don't need a group of old coaches and administrators from the Power Five, that are all reaping the financial benefits of this while no one else is, are telling me who are the best teams when I know they're not right."

"They were charged to give me the four best teams. Do we have the best two? Yeah. The best two's not the point. The best four was the charge of this committee, and they have woefully failed."