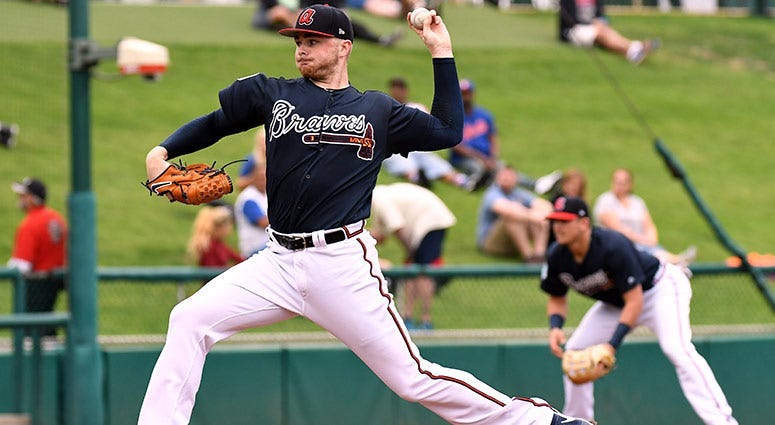 Today, we’re taking stock of how the Atlanta Braves pitching battle by looking at how three players are trending — up and down — compared to their squad standing entering spring training in February. Let’s get to it.

Off the back of his second outstanding outing of spring training Tuesday against the Yankees, Wright is making his case for securing a spot at the back end of the Braves rotation and make the Opening Day roster. The six-foot four-inch right hander has been reaching upwards of 96-mph with his fastball. What manager Brian Snitker and pitching coach Rick Kranitz will be most pleased with though is Wright’s command, striking out six batters without a walk in five scoreless innings so far this spring.

Yes, it’s the same Touki that got shelled for five runs in a single inning pitched against the Tigers on the last day of February. But in that start, 13 of Toussaint’s 17 pitches were strikes, and the righty bounced back Wednesday with three scoreless innings in which he allowed only one walk and no hits. Considering the injuries to the Braves staff and Toussaint’s major league experience, he’s looking set to make an impact early in the season.

Like all of these pitchers who are performing well this spring, they are individually benefitted further by the shoulder soreness that seems like an epidemic in the Braves staff. Perhaps no one is more of a beneficiary than Newcomb, who is looking like he could very well be the Braves Opening Day starter if Mike Folynewicz doesn’t make a speedy recovery from a sore elbow. Newcomb has a 1.00 WHIP this spring through five innings.

On the plus side, Allard has only conceded one earned run through 6 innings pitched in his three appearances this spring. But in those six innings, he’s walked five batters without a single strikeout.

After two clean outings to start his spring, things have gone south in the most recent two outings for the young right hander. He hasn’t gone the full inning in either of his two most-recent outings, walking four and allowing three hits in 1.1 innings total. It’s worth noting that Sobotka was tied for the most appearances made heading into Wednesday’s split squad action.

These three pitchers have all been plagued by various muscle soreness this spring, and the down time is likely to affect them in some form or fashion to start the season. That said, the severity of the affectation will vary. Mike Foltynewicz is (hopefully) only seeing his first start pushed back a few days, while Soroka’s injury is likely to bump him to Gwinnett to start the season.