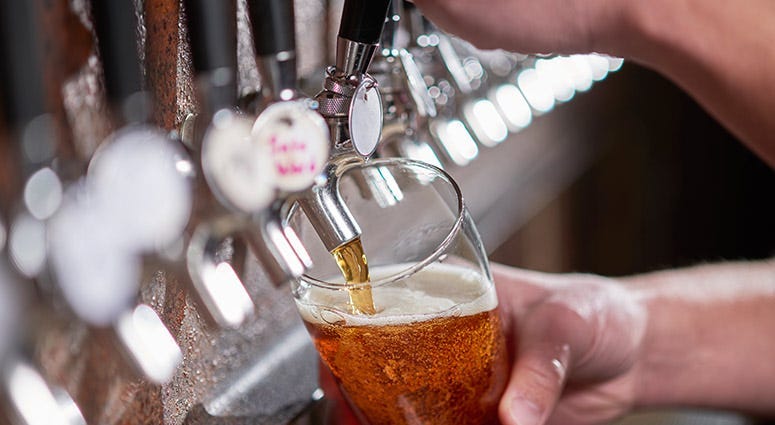 Brewery launches are notorious for never going as planned.

"Everybody has a plan until they get punched in the mouth," Tyson said before a fight.

An army on the battle field, an opponent in the ring, a launch schedule for a brewery, they're all the same in that nothing ever happens as originally mapped out.

Outrun Brewing Company in Stone Mountain was supposed to open its doors back in March. A delay here and a pushback there drifted their open date into a global pandemic. And that was just the start of more delays.

"We couldn’t get some of the things we needed," co-founder Josh Miller said as he told the story of trying to use the time after Georgia's Shelter-in-place rules lifted. "Waiting on equipment. Lot of factors. We also wanted to be safe."

As much of the food and beverage industry is still reeling, many are fighting to come back to life. To-go food, to-go beer, outdoor eating while socially distanced, they're all options. Miller said he, and partner Ryan Silva, couldn't wait any longer.

On Friday, Outrun Brewing Company will open its doors to the public. But as soon as you walk in, Miller hopes you'll head outside and enjoy some new Outrun beer.

Outrun's opening will be a little bare-boned. They don't have all the tables they expected to open with. They don't have all the beer either. Months ago, Miller hoped to open with five beers. Friday there will be four, and there will only be 18 barrels for the entire weekend. Hype has been growing around this launch, Miller said. While thrilling, he wonders if the 18 barrels will last the weekend.

If not, Miller and Silva will immediately get back to brewing. There's already one batch in the tank.

What's on tap for Friday's launch?

One of the cooler things to see during this pandemic is similar businesses working together for the mutual benefit of the pair. Customers win in this scenario too, as in the pairing of Second Self Brewing and Figs & Honey Catering in West Midtown.

Pairing food and beer has grown in popularity, and Second Self saw an opening to provide an extra service to its beer drinkers by offering a weekly takeout menu of food from Figs & Honey and pair it with one of their beers.

This past week Second Self paired their Smoked Paloma (a grapefruit sour with a "touch of smoke") with Balsamic Chicken served with cauliflower mash and a Caprese salad. Each week there are three food dishes paired with a different beer to choose from.

"A lot of our beers have food elements to them," taproom manager Carly Tritley said. "Like our most popular is Thai Wheat, we use fresh lemongrass and ginger from Dekalb Farmers Market."

Since food and beer seems second nature to Second Self (co-owner Jason Santamaria comes from a family of restaurateurs and owned a catering company himself while in college), this match witg Figs & Honey will be fun to watch. And it's about to expand.

Tritley says the brewery plans to close its taproom every Wednesday moving forward to hold a weekly dine-in dinner and beer experience that's both fun and laid back.

Groups of fewer than six can reserve a spot each Wednesday and choose one menu item to be paired with two beers. The taproom will be closed to the public and socially distanced from 6:30 to 8:30 with beer flowing for the public in the outdoor area.