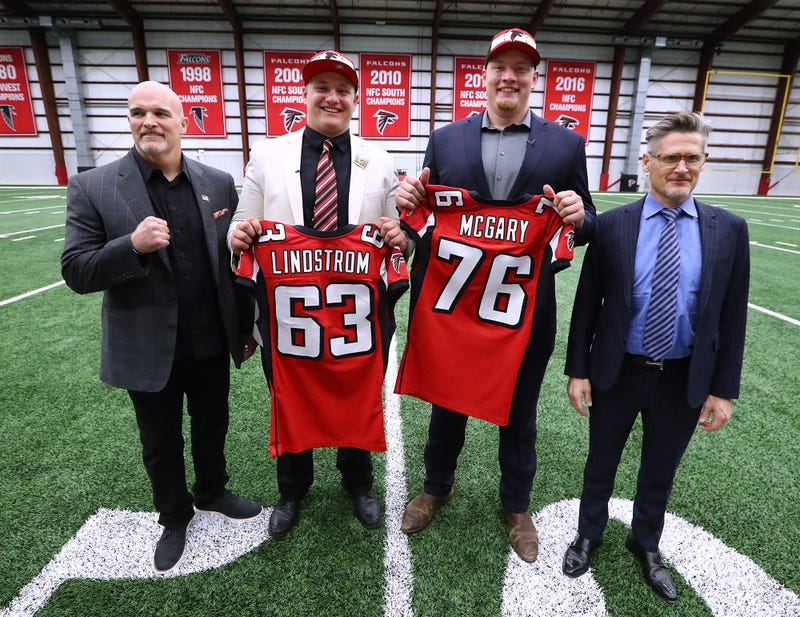 The Atlanta Falcons completely revamped their offensive line through the NFL Draft and the offseason.

Coach Dan Quinn had made a bold statement at the end of last season the suggested moves to the line were coming saying ""I'm comfortable at center and left tackle in the same way as you said. Past that, you scrub every bit of it."

And a report by Albert Breer in Sports Illustrated seemingly was confirmation about Coach Quinn's early plans to upgrade the talent on the line.
Interesting backstory here—After his offensive line disappointed in 2018, Falcons GM Thomas Dimitroff quietly made a January promise to owner Arthur Blank that it wouldn’t happen again, and pledged that at least one, and maybe two, of his first three picks in the 2019 draft would be spent in that area. Then he did Blank one better by drafting Boston College guard Chris Lindstrom with his first pick (14th overall) before dealing back into the first round to get Washington tackle Kaleb McGary at 31, believing the two would bring a toughness and nastiness Atlanta needs. Add those moves to what the Falcons did in free agency (adding James Carpenter and Jamon Brown), and Dimitroff has followed through with his promise.

Arthur Blank is confident about what the future holds. pic.twitter.com/669Pv9L8oI

Randy McMichael wonders if Dimitroff reached in his promise to Arthur Blank.

"You don't make promises to the owner that you can't keep," McMichael said."When you're talking about making an investment in something, that you definitely needed, yeah maybe. Maybe you were like 'ok, I told Arthur I was going to do this.'"

"Nobody saw (tackle) Chris Lindstrom as the 14th pick to the Falcons."

Andy Bunker has another theory on why there was a promise made, and kept, in a make-or-break year for Coach Quinn and Dimitroff.

"Why do you make a promise behind closed doors to an owner so you can then go about making good on that promise? To try and garner some favor? To try to make that relationship even stronger in this tough time right now, where if it doesn't work out it's like 'alright, it didn't work out but it's because I made that promise to you they wanted me to keep so the offensive line wasn't as good as we wanted it to be but I promised you I would work on it. Maybe next year it will be better.'"

If it doesn't work out, Randy still believes both Coach Quinn and GM Dimitroff are gone despite a grand gesture.