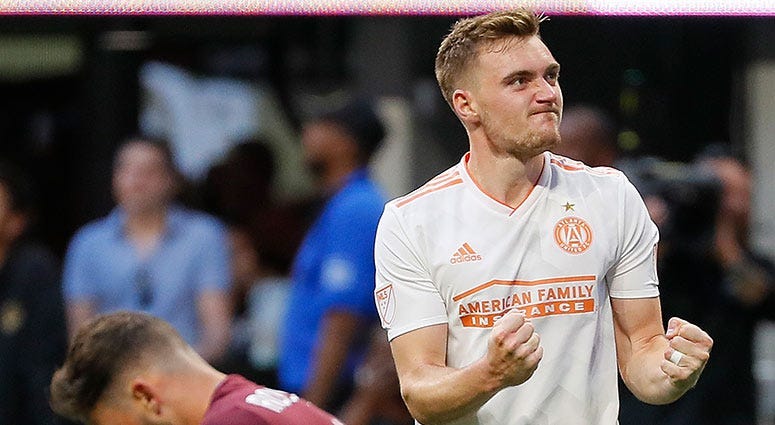 A busy month of May gets underway for Atlanta United this weekend. We’ll have all of it here for you on 92.9 The Game with the matches coming quickly. This weekend, we’ll be on the air at 8:30 p.m. Sunday night from Kansas City for the 5 Stripes Countdown followed by kickoff at Children’s Mercy Park. The Full Time Report will follow the final whistle for an hour to recap everything that happens.

Coming into the 2019 season, this weekend’s match was circled as a potential clash between the best of the Eastern and Western Conferences. Things have not exactly worked out that way so far in the early days of the season, but Sunday’s match at Children’s Mercy Park has some extra spice to it because of the records both teams are bringing into it. Atlanta is 2-3-2 after their win over Colorado, Sporting is 2-2-4 after a wild 4-4 draw with the New England Revolution. Both teams are expected to make the playoffs, but both are on the outside looking in at the playoff picture currently. Ahead of a busy month, this match will kick it off for both.

2. Sporting has an injury crisis

Kansas City manager Peter Vermes had to cancel Tuesday’s training session because he only had six players ready to go. He said he could have fielded twelve players in a match that day if it was scheduled. It’s not expected that the bench will have any empty slots on Sunday, but Vermes will have to juggle his lineup to accomodate for absences. Gerso Fernandes is the latest to leave the squad, undergoing surgery this week for a broken wrist suffered in the New England match. Matt Besler and Roger Espinoza’s injuries are the two big ones limiting Vermes’ options. Ilie Sanchez is another possibility, he sat out the first half against the Revolution with a calf strain.

In their last six matches in all competitions, Sporting has conceded 21 goals. Yes, ten of those came against Monterrey in the Concacaf Champions League semifinals. However, San Jose and New England both scored four. This trend started before the hamstring injury sidelined center back Matt Besler. Seth Sinovic has lost his starting left back job, with midfielder Yohan Croizet replacing him lately. The balance that was there in previous years seems to have disappeared with Ike Opara’s move to Minnesota.

Last week’s scoreline was not beautiful for Atlanta United, but the 5 Stripes took care of business against a conservative Colorado Rapids. Anthony Hudson set his team up to sit behind the ball and limit opportunities for Atlanta, which they did. However, in the second half Atlanta starting opening up the two deep defensive lines of Rapids players and Julian Gressel scored the only goal of the match in the 74th minute. It was a job done and Atlanta can take confidence from that fact that they broke down a bunkering team, while limiting the opportunities for the opponent to break out on the counter.

The primary transfer window closes on May 7 in MLS and clubs will not be able to make moves again until July 7. Big moves have happened at this stage in previous years. Last year, LAFC added Lee Nguyen and Adama Diomande to bolster their squad. Landon Donovan joined the LA Galaxy at this stage in 2005 and led them to MLS Cup later that year. Juan Pablo Angel and Guillermo Barros Schelotto joined the Red Bulls and Crew respectively in 2007 and met in the MLS Cup final a year later. This window does not just govern moves from outside the league, it also covers trades of players within the league.

Two big clubs are already linked to moves before the window closes. The Galaxy made a trade yesterday to acquire more Targeted Allocation Money. That is likely needed to bring in Atlético Tucumán attacker Favio Álvarez as a replacement for the injured Romain Alessandrini. Reports out of Argentine have Álvarez joining the Galaxy on a year-long loan with an option to buy. Toronto has had more injuries defensively and sits on top of the Allocation Order for returning players to the league. The Athletic’s Paul Tenorio and Pablo Maurer are reporting that U.S. national team center back Omar Gonzalez could be leaving Atlas in Liga MX to join the Reds. Gonzalez won three MLS Cups with the Galaxy before moving to the Mexican league.

7. Colorado makes a change at the top

After their loss in Atlanta and some of the puzzling comments made in the wake of it, the Colorado Rapids fired manager Anthony Hudson this week. Hudson won eight matches since taking over at the start of the 2018 season. Former club captain Conor Casey will be taking over as the interim manager of his hometown club. The Rapids are still looking for their first win in 2019.

8. Texas Derby in Houston on Saturday

The best match of the weekend could be in Houston as FC Dallas heads across the state of Texas to face the Dynamo at BBVA Compass Stadium. Dallas is coming off a disappointing scoreless draw at home with San Jose, following up on their impressive 2-1 win in Atlanta. They have played two more matches than the Dynamo, but are only one point ahead of them in the table. Houston is 5-1-1 in 2019, their only loss on the road to the LA Galaxy a few weeks ago. They field one of the best attacks in the league with Honduran Alberth Elis leading the line. Will Dallas sit deep and soak up pressure like they did in Atlanta to try to stifle the Dynamo’s firepower?

9. Other matches to watch this weekend

Los Rayados took care of business Wednesday night at the Estadio BBVA Bancomer, defeating their crosstown rivals Tigres 2-1 on aggregate to win the Concacaf Champions League. They took the advantage in the series in the first leg, winning 1-0 on the road at Tigres’ Estadio Universitario on a goal from Nico Sánchez. The Argentine captain did it again on Wednesday, converting a first half penalty to double the lead. Tigres star André-Pierre Gignac scored a spectacular late goal to make for some nervy moments, but Monterrey handled things fairly comfortably and celebrated in front of their fans. The Liga MX playoffs await as Rayados tries to do the double.

11. The U.S. roster for the Women’s World Cup was named yesterday

Manager Jill Ellis named the 23 players who will represent the U.S. at the World Cup this summer in France. The biggest surprise was St. Simons’ Morgan Brian making a return to the squad after injuries had limited her appearances since the 2015 Women’s World Cup. It likely came the expense of former Atlanta Beat midfielder McCall Zerboni, who has made a name for herself as one of the toughest midfielders in the National Women’s Soccer League with the defending champions North Carolina Courage. Training camp starts this week, with three friendlies ahead of traveling to France for the first match of the World Cup on June 11 against Thailand.