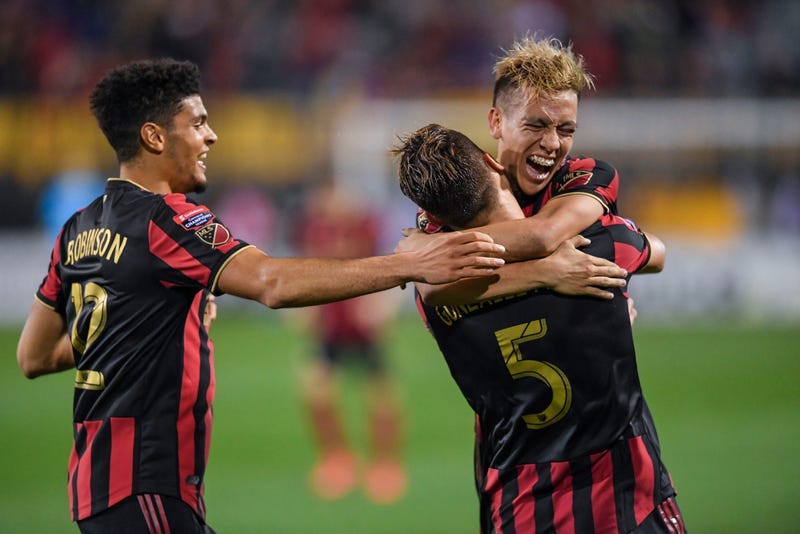 Great night for the Five Stripes as they overturn a 3-1 deficit in the Concacaf Champions League. No rest for Atlanta United, as the MLS opener is on Sunday. You can listen to our coverage starting at 5:30 p.m. on our sister station Star 94.1, or on the Atlanta United or Radio.com apps.

After a poor result on the road in the first leg, Atlanta United was flying out of the gates last night at Fifth Third Bank Stadium in Kennesaw. Two goals in the first ten minutes turned the series on its head and put Atlanta into the driver’s seat. Josef Martinez added a second and Leandro Gonzalez Pirez sealed the win with the fourth goal on the night to push the aggregate score to 5-3.

Herediano proved all of their worth as the current defending Costa Rican champions. They pushed Atlanta to the limit of where the Five Stripes are at this stage of the season. The strength and resolve showed last night will be needed in the next round of the tournament.

Business has definitely picked up for Atlanta United as Monterrey looms in the Concacaf Champions League quarterfinals. Los Rayados currently sit in second place in the Liga MX Clausura season heading into the ninth matchweek of the year. They have not lost in 2019, posting a 5-0-3 record. Tomorrow night, they head to Guadalajara to face Chivas in a huge league match before preparing to host Atlanta on Wednesday night. They are the only club in history to win three straight Concacaf Champions League titles (2011, 2012, 2013).

Off the field, Monterrey is one of the largest clubs in Mexico. They play in the Estadio BBVA Bancomer, which opened in 2015. Their large supporter base and ownership by FEMSA (Fomento Económico Mexicano, S.A.B. de C.V., one of the largest companies in Mexico) allows them to field a valuable roster as deep and talented as any in this hemisphere. They recently paid an eight-figure transfer fee to acquire Ezequiel Barco’s former teammate at Independiente Maxi Meza, who represented Argentina at the last World Cup.

3 - Both squads have to split their focus to league play

In addition to the Chivas match on Saturday, Monterrey will have to do battle with their cross-town rivals Tigres on March 9. That match is one that Los Rayados cannot take lightly, it is between the top two teams in the current Mexican season. With both teams in the midst of Concacaf campaigns, that match from Monterrey will be very interesting.

Atlanta United starts their defense of the MLS Cup title on Sunday in Washington, DC. How much squad rotation Frank de Boer will opt for is the key question going into the season opener? Striking the right balance between building continuity for the 2019 season and keeping players fresh for the Concacaf quarterfinals will be difficult.

4 - DC United can challenge in the Eastern Conference in 2019

If DC United stays healthy, they have one of the best attacking groups in the league. The combination of Wayne Rooney and Luciano Acosta is one of the best duos going right now. Lucas Rodriguez is an important signing from Argentina’s Estudiantes de la Plata and will create more chances for both of them. They finished 2018 strong and have the potential to push Atlanta and the New York Red Bulls in the Eastern Conference. However, their roster is very thin with only 23 players signed at the moment.

5 - Playoff spots up for grabs in the East

With Atlanta, the Red Bulls, and DC United looking likely to top the Conference, who will claim the remaining playoff slots? NYCFC has to replace the goals David Villa scored, and they do not have a true forward on the roster to do it at the moment. Caleb Porter takes the reins in Columbus, how long will it take for him to make the Crew his own after the Gregg Berhalter era? Montreal feels like a team that should make the playoffs, Remi Garde’s future with the Impact probably depends on it. Toronto will try to bounce back after a disappointing 2018 and an awful showing in this year’s Concacaf Champions League, but they will not get their full complement of impact players until a few weeks into the season, at a minimum. Chicago, Orlando, and New England all have the potential to be improved, but still have significant questions. Cincinnati is a complete unknown going into their first year in MLS.

Philadelphia could be the big surprise. The additions of Mexican international Marco Fabian and Brazilian striker Sergio Santos, along with a move to a 4-4-2 diamond, could see them push for a top spot in the East.

6 - Sporting Kansas City were dominant in the CCL

When a MLS squad has a Mexican crowd chanting “Olé” after each pass, you know something special is going on. Sporting Kansas City became the first MLS squad to win a Concacaf Champions League series with the second leg in Mexico when they demolished Toluca 5-0 on aggregate. They move on to face the surprising Vikingos from Panama, Independiente.

7 - Who can challenge Sporting in the Western Conference?

Sporting Kansas City appears to be the most complete squad in the Western Conference and should be the favorites to retain their regular season title. Portland defeated them in the playoffs, but their efforts to sign a high-priced striker have been come up empty-handed so far. They also have to wait until June for their home opener while renovations are taking place at Providence Park. Both Los Angeles clubs are looking to push Sporting in 2018, but they have to prove that their defenses are capable of competing over the long haul of the MLS season.

8 - What are the potential surprises in the 2019 MLS season?

Minnesota United has built a strong squad and are a playoff contender in the Western Conference. Adrian Heath’s job is likely on the line in his third year with the Loons. Their additions of Ike Opara and Osvaldo Alonso should strengthen a terrible defense from their first two seasons in MLS.

On the flip side, I worry that Seattle will not be able to find their patented midseason spark to make a run into the playoffs. Slow starts have been the norm in recent years, but additions like Nicolás Lodeiro and Raúl Ruidíaz have changed the team’s fortunes. They will need a big return from injury from Jordan Morris along with some new signings to be able to replicate last year’s second place finish. They could miss the playoffs without new faces.

In the bigger world of soccer in the United States, the US Soccer Federation proposed a Continental Cup tournament for national teams of Concacaf and South America in 2020. The South American confederation CONMEBOL has reportedly rejected the proposal so far, but that could be a negotiating tactic.

2016’s Copa América Centenario was a very lucrative tournament for all involved, even leaving money on the table due to same late starts on the sponsorship side. Running alongside the European Championships, it was a prime opportunity for this hemisphere to showcase the talent on display. If everyone can figure out how to divide up the money, this tournament is a no-brainer going forward.

The SheBelieves Cup has turned into a very important tournament in the world of women’s soccer. In a World Cup year, it is vital preparation. Four top-ranked teams in the USA, Brazil, England, and Japan are playing a round robin tournament over the next week as part of their run to the World Cup this summer in France. England defeated Brazil in the tournament opener, but the USA conceded late to Japan in a 2-2 draw. Jill Ellis is still trying to sort out her best formation and style, which is a little concerning at this stage ahead of the tournament.

Two starts and two standing ovations for Miggy at Newcastle. The Magpies are currently six points clear of the relegation zone, in large part due to two straight 2-0 wins with Almirón in the starting lineup. Wayne Rooney said this week that he was the best player on the field and it was a credit to the quality of Major League Soccer. Tomorrow, Miguel will likely get his first start on the road as Newcastle heads to West Ham.