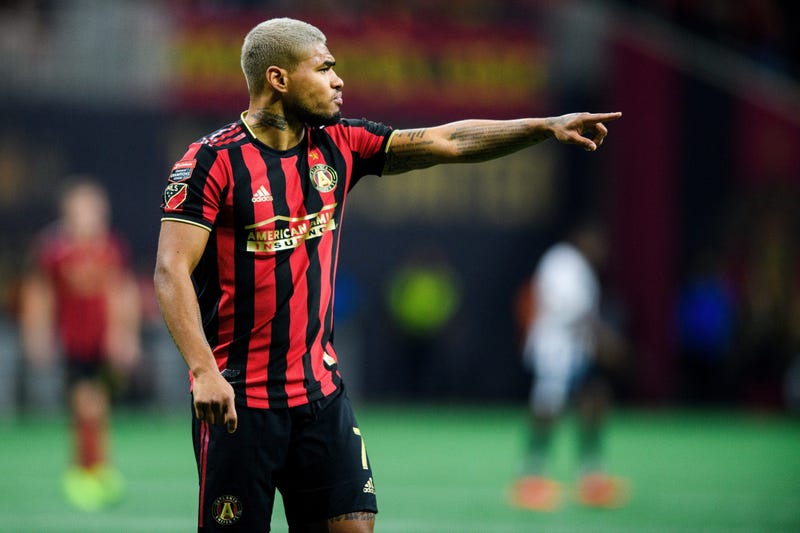 This last week feels like it had about 20 days in it. Atlanta United comes out of it with a disappointing draw in MLS play and a win in Concacaf Champions League, but not enough of a win to avoid elimination in the quarterfinals. It was a weird week…

Let’s look ahead to the upcoming weekend, starting with Atlanta’s opponent on Sunday. You can listen to our coverage from Mercedes-Benz Stadium of Atlanta vs. Philadelphia on Star 94.1 starting at 6:30 p.m. It will also be available on the Radio.com and Atlanta United apps.

Creating chances has not been an issue for the the Philadelphia Union in the last last two seasons. Finishing chances has been the problem, and it’s a big reason why CJ Sapong lost his starting job up top last season and why Sergio Santos was signed in the offseason. The trend has not changed in 2019 with the Union only scoring one goal in their first two matches. With Santos now out for at least four weeks with a Grade 2 hip flexor, the scoring load falls to Jamaican international Cory Burke.

Marco Fabián received a red card for a foul last week against Sporting Kansas City’s Johnny Russell and will miss out on the trip to Atlanta. Who will replace the Mexican star? Manager Jim Curtin said on Wednesday that he was “not afraid” to start teenager Brendan Aaronson. Signed to a Homegrown contract late last year, Aaronson has a good bit of experience with the Union’s USL Championship affiliate Bethlehem Steel and is pushing for a roster spot for the U.S. in the upcoming FIFA U20 World Cup this May.

3 - Atlanta has a different feeling after the Monterrey match

While they did not advance in Concacaf Champions League, the 5 Stripes looked more like themselves in their 1-0 win over Monterrey on Wednesday night. It was much needed after the disappointing draw against FC Cincinnati last weekend. Captain Michael Parkhurst told our Joe Patrick after the match, “We're disappointed not to advance. We had high hopes going into this tournament, but the performance down in Monterrey hurt us. Now that it's over though, the full focus is now on MLS and righting that ship and making sure we give good performances.”

After Sunday’s match, the squad will have a weekend off from league play due to the FIFA international break. Pity Martínez (Argentina), Josef Martínez (Venezuela), and Tito Villalba (Paraguay) will be with their national teams for most of the break, but everyone else will have a chance to train and recover from an intense start to the season. After playing in Columbus on March 30, the team has another weekend off from MLS action where the whole team can train together ahead of returning to league play on April 13 on the road in New England.

Los Vikingos, Independiente from Panama, gave Sporting all they could handle in their quarterfinal series. Holding a 2-1 aggregate lead, they kept Kansas City scoreless until the 74th minute in last night’s match from Children’s Mercy Park. Goalkeeper José Guerra made ten saves on the night, but Krisztian Nemeth’s goal with 16 minutes left in regulation gave Sporting the lead in the series. They added two more as reality set in and knocked out the valiant Panamanian squad. Kansas City moves on now to face Monterrey starting on April 3.

After a well-earned point at Mercedes-Benz Stadium last weekend, FC Cincinnati will host their first MLS match against the Portland Timbers on Sunday. Nippert Stadium on the campus of the University of Cincinnati is a little older than the Benz, it opened in 1915, but it has been a special place for soccer in the Queen City. With capacity at 32,250, it will surely be packed for Sunday’s match. When Kenny Saief is fully integrated into the squad, Cincinnati will be a difficult opponent for teams around MLS.

Seattle has been impressive at home in their first two wins against Cincinnati and Colorado. Now, they have a 12 p.m. local kickoff in Chicago to open up Saturday’s schedule in MLS. Will that home form travel to face a Fire squad that has been impressive in open play, but struggling to get results? CJ Sapong’s late header rescued a point last weekend against Orlando, but Chicago dominated the play against the LA Galaxy on the opening weekend before capitulating in the second half. Jordan Morris’ return from injury has been a big spark for the Sounders, it has also been good enough for him to earn a call-up to the U.S. national team for upcoming friendlies.

The U.S. will be playing Ecuador and Chile during the international break, the first time in new manager Gregg Berhalter’s tenure that he has been able to call in European-based players. It is a mixed group of players for Berhalter from his January camp that featured MLS players and stalwarts like Christian Pulisic and DeAndre Yedlin. Berhalter did not call Darlington Nagbe into camp, but mentioned him specifically as being close and likely needing the rest after a hectic start to Atlanta’s season.

Andrew Carleton and nine other MLS players were called up to Tab Ramos’ final U.S. U20 national team camp ahead of FIFA U20 World Cup starting in May. The team will play friendlies against France and Japan during the international break. Lilburn’s Juan Pablo Torres, recently signed by NYCFC, also earned the call-up as players try to secure their ticket to the upcoming World Cup.

Concacaf and CONMEBOL leaders are meeting in Miami this weekend to discuss a number of items, one being a combined World Cup qualifying format once the tournament expands to 48 teams. The expansion will begin in 2026 when the U.S., Canada, and Mexico will host the tournament, although there are rumors that FIFA is pushing for the expansion to begin with the next World Cup in 2022. With 4 of 10 teams from South America getting in now, plus the fifth place team going into a playoff, something will need to be done once the World Cup expands otherwise nearly all of South America would get an automatic bid without qualifying. However, even with expansion of the number of teams, this would make qualifying more difficult for the U.S.

11 - Inter Miami has a temporary home

It was not the intended location, but Inter Miami will play their first two seasons at Lockhart Stadium in Fort Lauderdale. If you saw the press conference held yesterday at the location, there is a lot of work that will have to be done to have it ready in time for the start of the 2020 season. In the long run, the location is expected to house Inter Miami’s training facility, academy, and second team operations. It was the former home of the NASL’s Fort Lauderdale Strikers.

news
US officials: Iran sent emails intimidating American voters
news
Parents name their daughter after internet provider to get free WiFi for 18 years
music
Tegan and Sara’s memoir is getting turned into a TV show
music
Reese Witherspoon reunites with 'Legally Blonde' cast for the first time in 20 years
music
Join the Country Music Hall of Fame's 'BIG NIGHT (At the Museum)' fundraiser
news
These 2020-inspired Halloween decorations are perhaps the 'scariest' of all