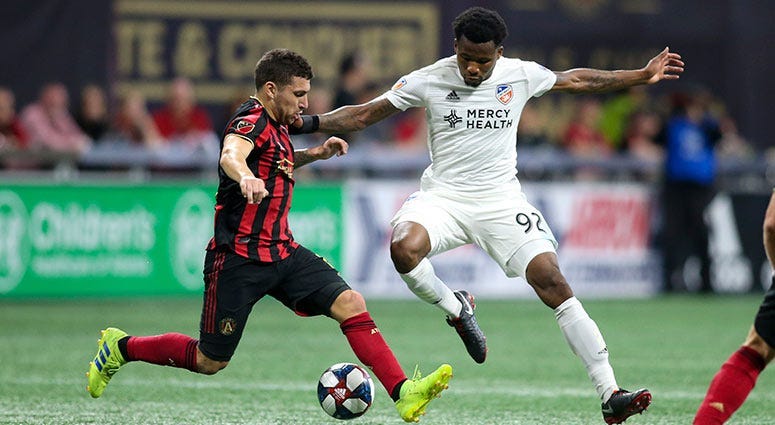 After picking up their first win in MLS play in 2019, Atlanta United returns home for back-to-back matches at Mercedes-Benz Stadium. The double dip starts on Saturday as FC Dallas comes to town. Mike Conti and I have your radio call starting with the 5 Stripes Countdown at 3:30 p.m., followed by kickoff just after 4:00. The Full Time Report will follow for an hour after the final whistle.

Facing an opponent with no interest in sustaining possession, Atlanta came out with a lineup that surprised everyone. Eric Remedi was paired with Jeff Larentowicz in front of a 4-man backline that included Michael Parkhurst on the right side. Designed to be secure against New England’s long ball attack and to win the second ball after aerial duels, it was put to the test from the very beginning. That test became more complicated when Eric Remedi was unable to continue after sustaining a head injury early in the first half. Darlington Nagbe dropped deeper to support Larentowicz and Atlanta’s overall defensive effort limited the Revolution to one shot on goal all night.

2. The boat leaves the dock

It was a surprise to see Ezequiel Barco left out of the starting lineup, but one of the attackers had to be sacrificed to incorporate Larentowicz. Remedi’s injury created an opportunity for Barco to prove himself. He opened the scoring in the 29th minute, finishing off a low cross from Tito Villalba that was cut back to the top of the 6-yard box. In the 49th minute, Villalba’s cross found him again, but this time Barquito unleashed a curling effort from 20 yards out that gave Cody Cropper zero chance to make the save. He also created two chances for others in what was possibly Barco’s best performance in an Atlanta United kit.

3. Atlanta absences on Saturday due to injury

Frank de Boer will be missing a few players against Dallas. Eric Remedi is day-to-day while he recovers from the head injury suffered in New England and did not train this week. George Bello’s recovery has been slow from injury, he has only featured for 67 minutes in an Atlanta United 2 match since his start in Costa Rica in the Concacaf Champions League. Meanwhile, Kevin Kratz (calf), Brandon Vazquez (knee), and Mikey Ambrose (knee) all remain out of action.

4. Luchi Gonzalez is the new man in charge in Dallas

New manager Luchi Gonzalez was previously Dallas’ academy director under manager Oscar Pareja. His goals were to develop technically sound players who were comfortable in possession and able to solve any problems that could arise in a match. At a club focused on developing youth and giving them opportunities at the professional level, promoting Gonzalez when Pareja was hired by Club Tijuana in Liga MX made perfect sense. His knowledge of the Homegrown talent, combined with his experiences as a professional in MLS and abroad, have given him a foundation to build his coaching style upon. His squad is third in MLS in possession and passing completion percentage. Their goal is to complete 600 passes in every match. They try to move the ball quickly to create goal scoring opportunities. When they lose possession, they try to regain it as quickly as possible.

Gonzalez’s history with so many of his players has helped him get off to a fast start through the first few weeks of the MLS season. After a loss in Columbus on March 16, Dallas is 3-1-0 over the last month. They have one win on the road in that timeframe, a 4-2 victory over a 10-man Real Salt Lake on March 30. They had to grind things out a little more than they would like last week against Portland, winning 2-1 with goals from Jesús Ferreira and a penalty from Reto Ziegler.

6. Balance of power in MLS

Last year, the Eastern Conference had the two top teams in Major League Soccer with Atlanta equalling and the Red Bulls surpassing the league record for points in a season. It’s early, but that balance could be swinging to the West this season with the three top teams so far in points are LAFC, Seattle, and the LA Galaxy. Houston and Dallas are off to strong starts as well.

7. Match of the weekend

The top teams in MLS. LAFC on 19 points at 6-1-1 and Seattle on 16 points at 5-0-1, face off on each of the next two Sundays. This week, LAFC plays host at the Banc of California Stadium while Seattle gets to host next week at CenturyLink Field. LAFC’s four-match winning streak was ended in Vancouver on Wednesday night 1-0. Seattle is yet to lose in 2019, even with striker Raúl Ruidíaz missing the last two matches due to injury. He returned to practice yesterday and could be in the mix for Sunday night.

It will be overlooked with the Western Conference heavyweights facing off, but the third place LA Galaxy is hosting the fourth place and undefeated Houston Dynamo tonight at Dignity Health Sports Park in Carson, CA. Costa Rican international defender Giancarlo Gonzalez is in line to make his Galaxy debut this week. Defensive reinforcements are needed against the high-powered Dynamo attack. Alberth Elis, Mauro Manotas, Tomás Martínez, and Memo Rodríguez are not as well-known as other stars around the league, but Houston’s offense is one of the most dangerous in the league. Take the over on this one.

The Montreal Impact have been without their star scorer Nacho Piatti in recent weeks and have found success on the other end of the pitch. After conceding seven goals in Kansas City on March 30, Montreal is yet to allow a goal in the month of April. Goalkeeper Even Bush is riding a 276-minute shutout streak. Now, the offense has not been taking full advantage with only one goal in the last three matches. It was enough to get a win in their home opener against Columbus. They head to Philadelphia this weekend with Piatti’s status unclear. The Union are expecting center back Mark McKenzie to return to the lineup this weekend.

10. Suspension on the way for Kaku?

Last week, New York Red Bulls midfielder Kaku was red carded after kicking the ball out of frustrating into the crowd in Kansas City. It struck a fan in the front row, reportedly bloodying their nose. His suspension has not yet been announced by Major League Soccer, but could come down later today after all appeal processes play out. MLS needs to make a statement here, this type of behavior cannot be brushed off. It is incredibly unlikely that there was any intent in Kaku’s actions, but the recklessness of them, combined with the potential for sparking all sort of reactions from the fans and opposing team mean that a precedent needs to be set here. Long term, this is not Kaku’s first issue of 2019 that raises eyebrows for the Red Bulls front office. We will have to wait to see what his long term future with the club holds.

South Georgia Tormenta is leading the USL League One in their first professional season at the third division level. In addition to breaking ground on a stadium in Statesboro, they recently announced that they are fully funding three teams in their academy (2006 and 2007 boys, 2007 girls). It is a pilot program created through a partnership of donors and corporate sponsorships designed to eliminate cost barriers for participation. A growing number of players from the area are breaking through into the professional ranks, expect to see more with this type of investment.