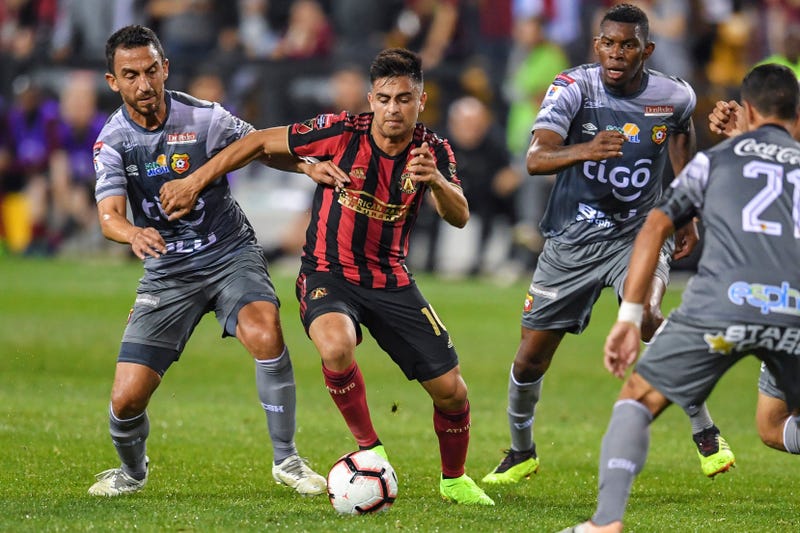 Rough week for Atlanta United with back-to-back losses for the first time since 2017 after losing the MLS opener on a rainy night in Washington, DC and falling in the first leg of the Concacaf Champions League quarterfinals in Monterrey, Mexico. The 5 Stripes come home to Mercedes-Benz Stadium for the first time in 2019 for the MLS home opener on Sunday against FC Cincinnati. Our coverage will start at 4:30 p.m. on Star 94.1.

In a week with only three shots on goal in two matches, there are many questions about Atlanta United’s attack. Chances just are not being generated right now, with the team only notching eight key passes (passes that lead to shots and would result in assists if a goal is scored) in the two matches. Against Monterrey, a squad that has racked up five straight clean sheets in all competitions, goal-scoring chances were always going to come at a premium. However, the lack of offense against DC was very surprising.

2 - The third goal in Monterrey is the most painful

After conceding an early questionable penalty, Atlanta bounced back fairly well. Leading 1-0 late, Monterrey brought on fresh attacking legs in Rodolfo Pizarro because they sensed an opportunity. As Atlanta tired, the Rayados took advantage and scored through an excellent effort from Dorlan Pabón in the 80th minute. In the critical moments after this goal, the series tipped decidedly in Monterrey’s favor. Atlanta did not make any changes to its approach as Monterrey continued piling on the pressure. If Wednesday started 2-0, it would have a far different feeling than 3-0.

Frank de Boer opted to not make substitutions until the 90th minute, which ultimately came back to have an impact on the match. After Monterrey created some chances early in the second half and match appeared to be getting away from them, full credit to Atlanta’s squad on the field for regaining control of the match and forcing Monterrey back on their heels. After the Pizarro substitution and 75+ minutes of intense action, the 5 Stripes struggled to hold on to that control. It all slipped away very quickly. Fresh legs or a change in the shape might not have changed anything, but they felt needed.

Atlanta has a deeper roster than any other squad in MLS, but it has its limitations. On Wednesday night, those limitations appeared on the right side with both Franco Escobar and Julian Gressel unavailable due to injury. Mikey Ambrose gave Gressel some rest last weekend in DC and he was forced into the biggest match of his career in an unfamiliar position. He performed admirably, secure defensively as was needed against Monterrey. He is not the same attacking threat as Gressel or Escobar however, and it showed as Atlanta became one-dimensional playing through the left side. Escobar is close to returning from a broken clavicle suffered on the first day of training and Gressel is day-to-day with an ankle injury.

Think of it like college basketball. How often do you see upstart teams get calls on the road against heavyweight teams like Duke, Kentucky, or North Carolina? Atlanta United is an upstart team in Concacaf and they do not get the same respect from referees in the region like an established grande like Monterrey.

Even that does not explain how Pity Martinez is fouled ten times in the match without drawing a yellow card to a Monterrey player for persistent infringement. It’s pretty much the definition of persistent infringement. No player in an MLS match in the last five years has been fouled ten times. It was obviously the game plan from Monterrey, and when the game is called in that manner, it will work every time. Carlos Rodriguez committed ten fouls without seeing a caution, which is just shocking.

6 - Workload for this weekend?

With Atlanta United’s starters logging lots of minutes so far this season, Frank de Boer is in a tough spot going into the upcoming week. Matches loom on Sunday, Wednesday, and next Sunday before getting a week off for the international break. New MLS club FC Cincinnati makes their first trip to the Benz on Sunday, they’re coming in off of a 4-1 loss in Seattle on the opening weekend. Does de Boer rest players ahead of Wednesday’s second leg against Monterrey? Or, does he field his best lineup against Cincinnati to try to get a league win and take some chances against Monterrey with such a heavy scoreline going against them?

With one league match and two Concacaf matches under their belts, each MLS vs. Liga MX match in the quarterfinals ended in defeat for the American squads. The Mexican clubs are going into Matchweek 10 of their current Clausura season, along with Concacaf and Copa MX matches along the way. It is almost impossible for the MLS clubs to be as sharp and fit at this stage of their season. With reports that the MLS season will start a couple of weeks earlier going forward, that will help a bit.

Liga MX clubs also do not have to navigate salary caps or Designated Player rules in building their squads. That gives a club like Monterrey the opportunity to build a roster that manager Diego Alonso says is two-deep at every position. It gives these matches a feeling of MLS clubs competing with one of their hands tied behind their back.

8 - Is it time to allow more spending in MLS?

With a new Collective Bargaining Agreement due to be negotiated between the league and the players, this will be a huge topic of discussion. MLS has grown in a very measured, conservative way over the years and it was the correct strategy. However, the league has set a goal of being one of the world’s best. That does not happen until MLS clubs are winning the Concacaf Champions League. And that likely does not happen until MLS clubs can compete across the board to have rosters as strong as Liga MX clubs.

If this happens, the parity that MLS has touted since its inception will somewhat disappear. Clubs like Atlanta, Toronto, LA Galaxy, LAFC, Seattle, and NYCFC have shown an ability and an interest in spending heavily on their roster. Miami will likely join that group when they launch next year. Would enough clubs push for increased spending?

Toronto answered their critics with a 3-1 win in Philadelphia, led by two goals from Michael Bradley.

Orlando fought back from a two-goal deficit as James O’Connor used Dom Dwyer, Josue Colmán, and Nani off the bench to turn the match against against NYCFC.

Colorado scored two goals with ten men in the snow against Portland, the equalizer coming from Andre Shinyashiki in the 94th minute to earn a point against the defending Western Conference champions Portland.

16-year old Efrain Alvarez had a hand in the equalizer and eventual winner for the LA Galaxy in their 2-1 win over Chicago.

Can Philadelphia be effective in their 4-4-2 diamond with Haris Medunjanin as the pivot defensively?

Will the New York Red Bulls be able to replace Tyler Adams?

Are the New England Revolution a playoff team?

England left with the SheBelieves Cup as the USA squad left undefeated, but unable to win against the two top teams in the tournament. With only a handful of friendlies between now and this summer’s World Cup, can Jill Ellis figure out the best lineup to get results on the big stage? It will not be easy with the hosts France, a confident England, skilled Japan, and a strong Germany among the favorites. This will the most wide-open Women’s World Cup in the history of the tournament.