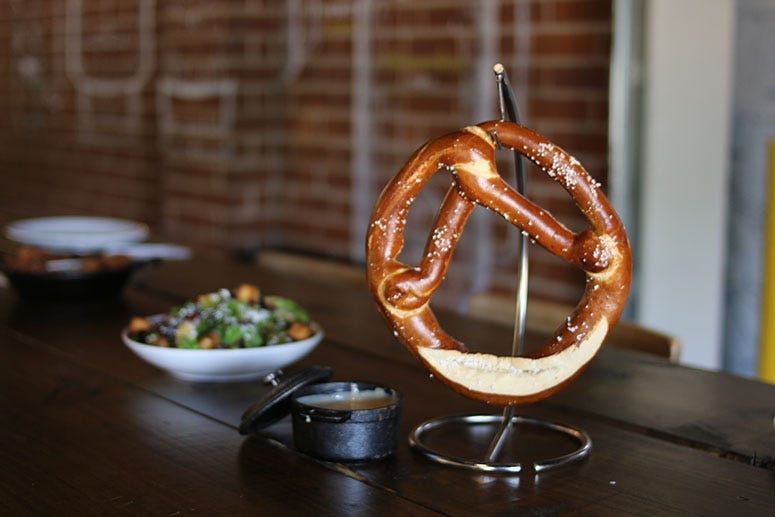 The first thing that comes to mind when thinking about Tucker Brewing Company is lager. More specifically, German-inspired lagers that are crisp, tasty, and go down really well.

The folks at Tucker have just added a culinary twist to their already popular beer offerings.

We're entering the first weekend where you'll be able to order food from Tucker Brewing's in-house kitchen, and sample some of the ideas owner Ashley Hubbard has had in mind for some time. Hubbard ended an exhaustive search for an executive chef a few weeks back when she hired Nicole Fey, who has helped bring to life a robust new food menu.

"It’s great to work with lager-style beers because they’re so food-friendly," Fey said. "There’s a whole world of possibility. They’re not going to blow out your palette. You can have more than one, it’s not super intense, super high alcohol."

Fey's only been in town two weeks from Florida and has already identified her favorite Tucker beer offering. She makes the beer cheese sauce with the Georgia Red Lager.

"It’s just so malty and interesting and refreshing at the same time," the new executive chef said. "I think it’s really fun to play with that and food pairing with it. It’s just a really unique beer."

There's also Tucker Lager in the Thai Coconut Mussles and the beer-battered fish and chips. Hubbard said eventually the brewery will pair all their beers with an item on the menu, calling it educational for people who come in with a food in mind or a beer on their brain to easily find a matching pair.

Kitchen opens on Wednesday and I tell you the eats equal the great beer. Thanks, @tuckerbrewingco & @elianabarnard for having us out to try everything. pic.twitter.com/XBrHnZMRa2

Hubbard, a graduate of the Culinary Institute of America, knew what she wanted on the Tucker Brewing menu. Once she and Fey got together. the creativity blossomed into the menu that was launched Wednesday. It's made up of lots of small-plate options for groups to dig into together. But that's not all.

There are six shareable items on the menu, Fey counts. There are also four side options to go with five large-plate meals.

"There’s something for everyone," Fey said. "We have a burger, we have a roasted chicken, we have a fish and chips, we have a pork Schnitzel, vegan Schnitzel. There’s something you can find in there that you can really enjoy. And of course, a giant pretzel, because it’s a German brewery."
Photo: Tucker Brewing Company

Not only is there a vegan option with the Schnitzel, the pan-roasted chicken with chorizo fried rice, and an avocado salsa Verde, that entire dish is completely gluten-free. So are the mussels, and many other items can be made gluten-free, as well.

"Past that as far as vegan options, I have one fully dedicated plant-based dish on the menu and we have starters, five or six items, that can easily be made vegan upon request," Fey said. "I designed it [the menu> to be a little modular like that."

Fey, who has a master's degree in Gastronomy, loves the idea of local, and seasonal. At her last stop, a beach town in Florida, she had people drive trucks to her back door to sell grouper and barrel fish. When she was in Boston she used a lot of local oysters. Local "needs to be such a big part of what you do, especially in a restaurant in a brewery where we want to be a part of this community and support community and support local farmers and local artisan."

Fey and Hubbard speak the same culinary language. But there's another aspect to the business that Tucker Brewing's new chef can identify with. Fey was an avid homebrewer in Boston. She can talk beer with brewmaster Tucker Eagleson, too. The duo is beginning the talks of bringing back an old Tucker brew to pair with a brunch menu sometime in the near future. The possibilities are endless.

Tucker Brewing's kitchen will be open whenever the brewery is open to the public. It'll close 30 minutes prior to last call. And yes, with a patio as large and as kid-friendly as this one, Fey and Hubbard made sure there was a kid's menu, too.

"You have easy-drinking beer, you have food that’s approachable, you know you can come and hang out with a group, you don’t have to bring anything in, there’s a variety of options for anybody that’s coming," Hubbard lists off reasons to add a kitchen to the mix at Tucker Brewing. "I think at the end of the day it’s going to keep people here. They’ll be able to have another beer because they are able to order food. It adds to the experience of what we’re doing."

And, in a time where this is of major importance, Tucker Brewing's new kitchen is a job creator. Seven new positions were added, not including Fey's.