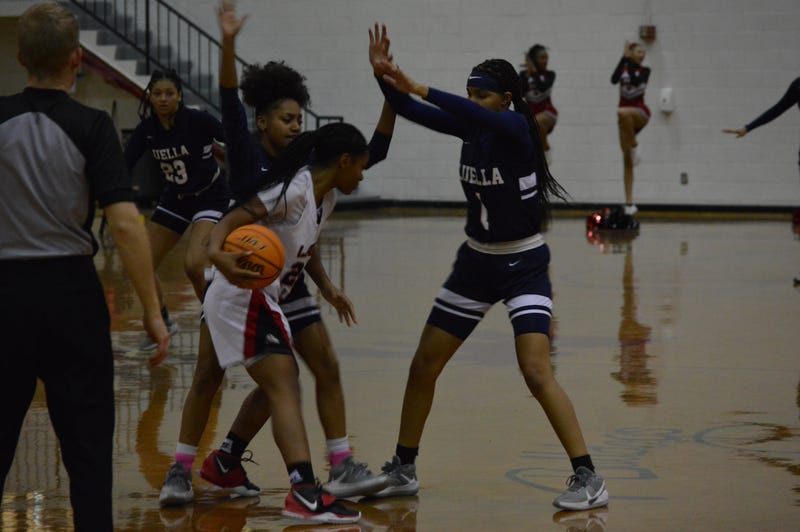 On Tuesday, the No. 3 girls basketball in the state, the Luella Lady Lions, hit the road to take on the Mt. Zion Lady Bulldogs in a key region match-up in which the Lions would win by a final score of 75-42. With the win, the Lions improved to 15-2 overall and 7-0 in the Georgia High School Association Class 4A region 5 standings. The Luella win also completes their season series sweep of the Bulldogs, who they beat 52-44 back in early December.
Tuesday night’s performance by the Lions was cleary one that was more dominating. Mt. Zion was able to keep the game fairly close through the first two quarters, however, costly turnovers in the second would allow Luella to build off their 33-25 half time lead as they outscored the Bulldogs 18-7 in the third quarter and 24-10 in the fourth quarter in route to victory. Luella’s Jada Sessions led all players with 24 points along with 10 rebounds and the Lions got 15 points and eight rebounds from Ariana Dyson, 11 points and six assist from guard Courtney Gardner and 10 points and three steals from Camryn Berry. Following the win, Luella head coach, LaToya Brown, said she has to remind her girls that they have a target on their back, especially with the release of the recent rankings. “Being a top seed, I always tell the girls, it’s a blessing and a curse,” Brown said, adding, “you’re going to get everybody’s best, so we have a lot of work to do.” Brown went on to say that she feels the team is not quite where she would like to them to, however she’s “proud of their effort” and that she reminds her players, to “keep having fun and appreciate the moment. In the last couple of years, with us going back to back with final four appearances, it has always been serious. So I just keep telling them to make sure they enjoy and embrace it.”

More score from the night: