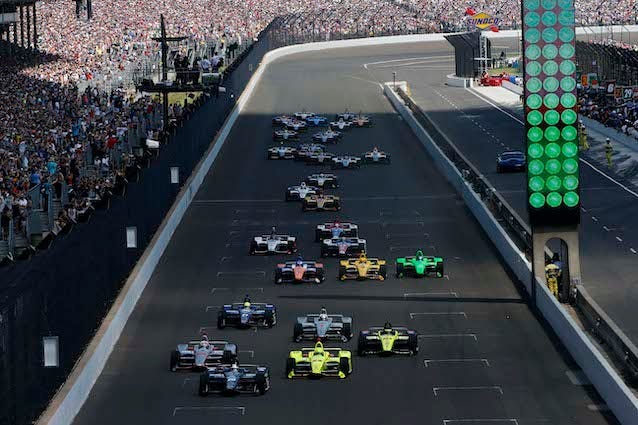 SPEEDWAY, IN (93.7 The Fan) – Thirty-three of the fastest open-wheel drivers in the world will take the green flag at the historic Indianapolis Motor Speedway for the 103rd Indianapolis 500, The Greatest Spectacle in Racing.

Only one of those of those drivers will cross the yard of bricks first and it will instantly change their life.

Team Penske’s Simon Pagenaud will lead the first row of three-abreast down the front stretch.

Pagenaud is on a roll, starting off the month of May with a victory in the IndyCar Grand Prix, the race run on the Speedway’s infield road course.  Pagenaud followed that up by winning the pole position last Sunday. He is considered one of the favorites coming into the race and he drives for Roger Penske, the team owner who has won the most Indy 500’s (17).

“I think we all have a common goal, right?” said Pagenaud.  “Our common goal here is to win races.  We did it last race (IndyCar Grand Prix).  As a team we’re really in good shape.  We (Team Penske) all have a chance to do well at the Speedway and in the championship.”

If there is a sentimental favorite, it’s Ed Carpenter.  Carpenter starts right beside Pagenaud in the second starting spot.  Carpenter won back-to-back pole positions in 2013 and 2014 and finished second in last year’s 500.

Starting third is Carpenter’s teammate Spencer Pigot.  Pigot had the fastest speed last Saturday when the provisional field was set prior to last Sunday’s “Fast Nine Shootout” which determined the first three rows in the field.  He is one of IndyCar’s young drivers to watch.

One of the other young drivers to watch is Harding Steinbrenner Racing’s Colton Herta.  Herta, a rookie, starts fifth and is the fastest car with a Honda engine.  Herta has racing blood in his veins as his father Bryan is a retired driver turned car owner.  The last rookie to win the 500 was Alexander Rossi in 2016.

Defending champion Will Power starts sixth and any of Penske’s drivers will have a shot to win the race.  Power would like nothing more than to add 2-time Indy 500 winner to his resume.

“It’s a real honor to have your face on that trophy and be amongst the 12-guys that have won it for Roger,” said Power.  “Obviously, it’s a huge effort that they put into this race.  You know you’re going to have a shot year in and year out.”

Penske’s Josef Newgarden has won a championship for “The Captain” but has yet to win a 500, something he hopes to change this weekend.

“I think you approach it like every other race,” said Newgarden.  “You have to put yourself in a position to hopefully win it.  If it all works out, maybe you’ll be the person at the end of the day drinking the milk.”

In addition to Power, there are six other drivers in the field who have drank the milk in victory lane.

Alexander Rossi is the highest starting driver of the former winners other than Power.  Rossi starts ninth and would like nothing more than to add his image to the Borg Warner Trophy for a second time.

Rossi’s teammate Marco Andretti may be as big a sentimental favorite as Carpenter considering this year is the 50th Anniversary of Mario Andretti’s only Indy 500 win in 1969. Marco Andretti will start tenth.

Team Penske’s Helio Castroneves is the only three-time winner in the field and could make history with a victory, joining AJ Foyt, Al Unser Sr., and Rick Mears as the only four-time winners.  Castroneves starts 12th.

2013 winner Tony Kanaan had the fastest practice time on Carb Day and admitted it came with the help of an aerodynamic tow from other cars up ahead.  Kanaan, who starts 16th, said he concentrated on making his car better in traffic.

2008 winner Scott Dixon was not happy with his No. 9 PNC Bank Honda after Friday’s Carb Day final practice. Dixon, who sits second in the championship points, starts 18th and says the team has two goals every season.

“To win the Indianapolis 500 and then the championship,” said Dixon the 5-time champion and winningest active IndyCar driver.

Dixon’s teammate, rookie Felix Rosenqvist, starts 29th in the No. 10 NTT Data Honda and plans on being cautiously aggressive.

“Starting where we are starting, obviously looking for opportunities,” said Rosenqvist.  “I think we have to be quick thinking about our strategy and be ready to take alternative strategies as well and let the race come to us.”

If you’re looking for someone to watch to come from the rear of the field to the front, look for James Hinchcliffe.  Hinchcliffe won the pole position last year but wrecked his primary car during qualifying and put his back-up into the show during last Sunday’s “Last Row Shootout”.

The green flag waves at 12:45 p.m. ET and can be seen on NBC and heard on the IndyCar Radio Network affiliates.